I've been doing a few projects lately using the DS1307 IC. If you don't already know, the DS1307 is a real time clock chip (as opposed to an unreal time clock chip, which is often used by musicians and people attending events on Facebook). This means that you just have to attach a quartz watch crystal to it, and it'll keep time for you. RTC chips are divided into two categories; those that keep time by counting seconds (usually as a 32 bit number) since some specific start point, and those that count seconds, minutes, hours, days, months, and years.

This is great, and super useful, but every time I need to pull the chip out of the breadboard to move it, or even just accidentally remove power, it loses the current date and time. Since most of my projects aren't serious enough to warrant wiring up buttons and coding a way to reset the clock, I have to instead plug my Arduino into my laptop with a USB cable, reflash a DS1307 clock setting program I threw together, send it a 13 digit number over the serial port, reflash the firmware for whatever project I'm currently working on, and move forward. Can you see how this would get just a little annoying after the twentieth time? I also have been using the SRAM on the clock to store data, and losing that isn't catastrophic, but annoying as well.

Lucky me, the DS1307 has a neat little feature, where it has an extra pin that you can connect to a Lithium 3V battery, or tie to ground if you're not using it. Sparkfun has a board that has a surface mount DS1307 on top, and a battery clip underneath, which would be useful, but at $20, is a little rich for an inconvenience. I then saw an idea where you do the same thing, just with the DIP package, and all on one side of a piece of perf board.

Parts list
Wiring it up
The DS1307 is nice enough to have 4 of the 5 IO pins on one side (5 - SDA, 6 - SCL, 7 - SQW, 8 - VCC). The fifth pin is for the ground connection, which you need to jump from the other side of the IC with some wire. The battery clip needs to be connected between VBAT and GND, so that'll take at least one piece of wire from the far end. I soldered the crystal straight to the perf board and DIP socket. You should end up with something that looks like this: 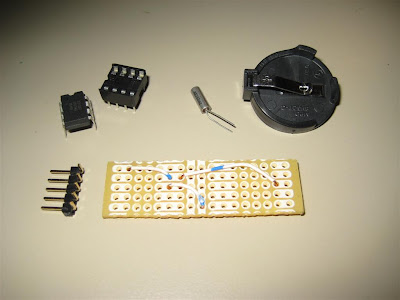 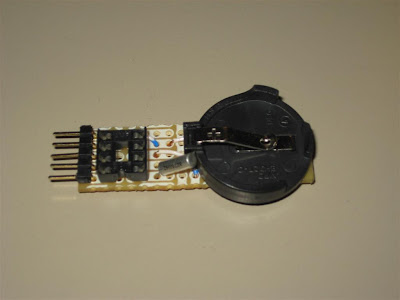 Results
It works quite well when it's plugged into a project, and I power down everything else. It's super nice not having to try and keep this powered while I'm mucking around with all the other wiring on a board.

I have had a problem when it's just sitting loose. It seems that when VCC isn't pulled to ground, the chip only keeps time half as fast as reality, which makes it less real time, which personally, I find quite offensive. For the second revision, I would probably add a resistor, or even just a bypass cap (0.1μF) between the VCC and GND lines to improve this. While plugged into a project, the rest of the project keeps the VCC line very much at ground, so it's not a very big issue as far as I see it.

Considering that I managed to put this together for easily half of what the Sparkfun board costs, and that I got to break out the soldering iron, which is always welcome, I'd call this project a success.