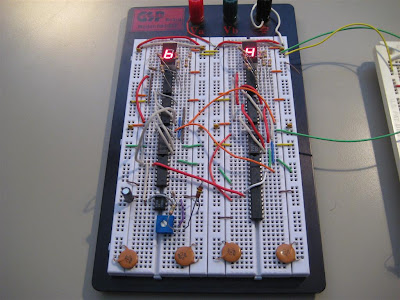 Things have been a little crazy as of late, with finals coming up, so I figured I'd post something I had to do for class to give ya'll a break from all of my clocks.  The final lab project for my circuits and systems class this quarter consisted of designing a two digit frequency counter, which we then used to measure the rotational speed of a motor with an LED and phototransistor.  The design is rather rudimentary, since we use a 555 timer for the time standard, but after putting enough effort into getting the pulse width calibrated, it does a pretty good job of getting within a few hertz of the actual frequency. 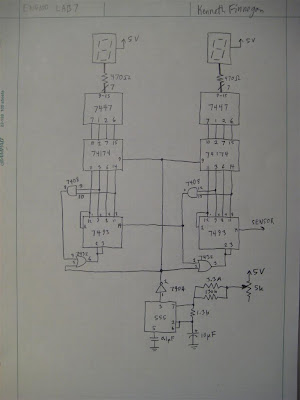 The two 7493 counters are wired with AND gates to reset when they reach 10, making them divide by 10 instead of 16.  The output of these counters are fed into a pair of 74174 flipflops, which save the current output when the 555 fires every second, which means it only displays the final result, instead of showing the counters count up from zero to the final count.  The 74174s then feed into 7447 decoders, which decode the binary coded decimal into 7 segment displays.