It's finals week, which is why I've been so quiet, but next week is the start of Winter break, so I'll finally have some free time again.

One of my technical electives this quarter was EEC180A, Digital Systems, which is one of the hardest EEC classes at UC Davis.  I didn't end up learning much in it, but the final lab, which took three weeks, ended up pretty impressive. 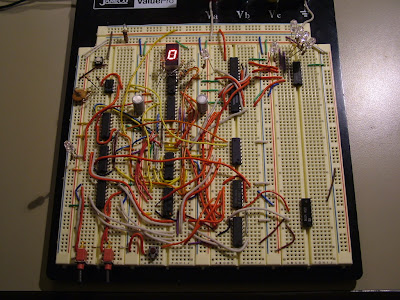 
The game consists of flipping one switch to roll a dice to pick a number between one and six.  If you roll a six, you have to add it to your score, otherwise you have the choice to add it or pass.  The goal is to reach 15 points without going over in as few rolls as possible.  It's entirely implemented using TTL gates, though I cheated and used several gates out of my stock in addition to the ones allowed in the class (eg using a 74174 hex D flip flop instead of several 7474 gates).  I also used a 555 for the clock source, where we were only expected to use the lab's function generators.  Since I did most of the work in one night at home, I didn't have a function generator to work with.

No detailed schematic or anything for this one, just thought I'd share why things have been quiet as of late.