I've been following along with Mark VandeWettering, K6HX, this week playing with Tetsuo Kogawa’s 1 transistor FM transmitter, and I figured I'd post my results too, after watching Mark have so much fun with it as well [1][2][3]. 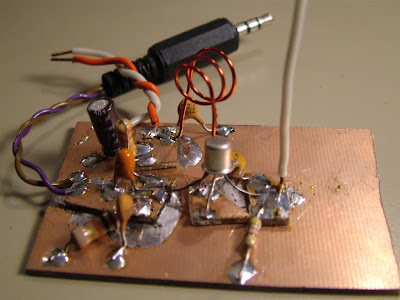 
I did make countless adjustments to the original circuit, since I had almost none of the exact value components called for, but picked ones that were pretty close, which might explain why mine doesn't work all that great.  Like Mark, I used a more common transistor (2N2222, he used its smaller brother 2N3904).  Everything else was little better than within 50%, so the fact that it works at all is pretty amazing.  I really need to refresh my capacitor kit...

In the video, I mentioned that I actually got much better performance when it was still in a breadboard.  I had shrugged this off as some stray capacitance doing the circuit good, but it turns out that it was mostly because my feedback capacitor happened to be laying on the ground plane, which was what was hurting the stability of the circuit.  Bending the 15pF capacitor back up means it's about as stable as Mark's ugly build now, only with rather poor bass response. 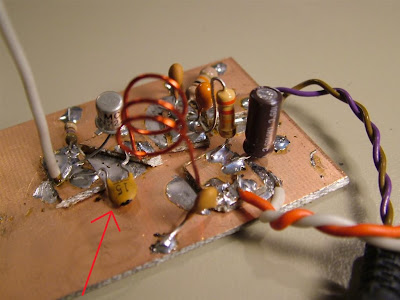 I'm running the circuit on 12V, and it's drawing about 8.9mA, which is comforting, because I don't want it putting out any more power than I have to to play with.  I'm not even entirely convinced its transmitting in the 100MHz range; it could very well be transmitting in an entirely different band below 100MHz and I'm just picking up some harmonic.