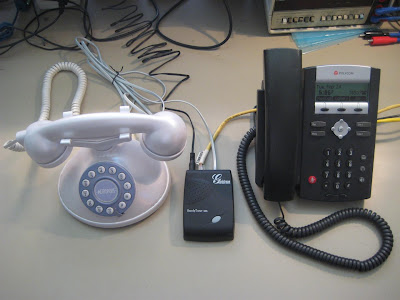 A few months ago I saw a few articles float through Google Reader about people doing some neat stuff with SIP hardware, at which point I really realized how much the second-hand SIP hardware market had finally come down to a point where I could afford to start playing around with it.

SIP is a Voice over Internet Protocol system, much like Skype, except that where Skype is a complete black box, SIP is a public specification, meaning that everyone else uses it, and can all call each other using their email-address like telephone numbers.  Also unlike Skype, since everyone ELSE can use it, there is much more nicer hardware supporting SIP than Skype, so you get a whole range of devices from epic teleconference rigs all the way down to simple ATA (Analog Telephone Adapters) allowing you to use any touch-tone phone you want, instead of only the crappy USB pseudo-soundcard "phones" you can get for Skype.

Between eBay and hitting up the Silicon Valley Swap Meet last week before the Maker Faire, I managed to get three SIP lines at $10 a piece (I'm actually getting pretty good at haggling at the swap meets).

This now of course begs the question, since everyone we know uses Skype, what use do I have for having three SIP phone to call myself across the room?  Personally, I have to admit I currently don't have much use for it, BUT, I think the consumer application for these is OBVIOUS:

Daughters.  I reckon every daughter at some point wants their own phone line to be able to call their friends in privacy.  With SIP, you can build your daughter and her girlfriends an entire phone system, separate from the general population, and if you setup your own SIP server (like Asterisk), even separate from the rest of the SIP network.  Buy each little friend their own ATA and they can all call each other as much as they want with no fixed costs for you, while you have the additional advantage that this is a walled garden environment.  Think of applying this to the same target audience as the popular-among-hackers IM-ME instant messaging system.

In that vein, here are a few walk-through guides as to how to configure various models of SIP hardware, which can at times become... difficult.  Setting up your own SIP server, and doing it well, is a little beyond me at this point, but if I ever do happen to figure it out, I'll update this.  For now, good luck reading through all the vague and half-correct tutorials out there on Asterisk, and enjoy these hardware tutorials to go with them:
And of course, if you have a different piece of SIP hardware that you want me to write a guide for, feel free to email me for my mailing address and mail me one to play with. :-)

Another cheap one I've seen pop up a few times which you could use is the OBi100 ATA.