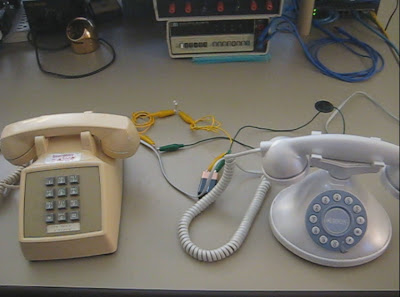 I like the idea of writing a series on the home-brew toys that I grew up on (and actually still play with some now).  My childhood was one filled with days of playing with packing material and old electronics rubbish that comes from growing up as the child of a chemist turned EE in the Silicon Valley.

One of these toys that I played with was a rudimentary intercom, build from a pair of analog telephones, a 9V battery, and a single resistor (and optionally some LEDs).  My pictures and videos show the battery and resistor loose and just clipped on, but it would be very easy to build a more robust toy with a standard plastic gang box and a dual phone jack module from ACE or Home Depot.


The intercom lacks most features; it can only handle two phones (or more, but all must be off-hook and in series) and unless you can find some real pulse-dial phones, you can't even ring the other phone (If you're lucky, pulse dialing will in fact ring the other phone).  Even still, it is a very impressive version of the classic two cans and a piece of string toy.  Run the cables between children's bedrooms, or up a tree house, or anything else you can come up with.

The principle of operation is very simple.  Phones operate over a single pair of wires, which carry both sides of a conversation at once.  The microphones rely on a bias-current flowing through them to pick up sound, which is why you can't just plug two phones together and hear each other.  By splicing in a 9V battery and a 300 ohm resistor, you can crudely insert 5mA of current, which is enough to at least hear each other.  Conveniently, when either phone is hung up, they go into a much higher DC resistance state, meaning that this loop current being drawn from the 9V battery is stopped when it's not in use.

As shown in the video, if you also put an LED in-line with the phones, it will light up when both phones are picked up.  An obvious extension to this system would be to install an LED in both phones, so that the users can tell when the other phone is picked up.

Of course, in this day and age. if you wanted to put together a more sophisticated system, with multiple phones, ring service with extension numbers, spanning more than your house, etc, it would be entirely possible.  On eBay you can get several Polycom or Grandstream SIP VoIP phones for less than $100, then plug them into the internet anywhere and your kids can call their friends as much as they like.  I've shown how to do this in the past.