How to Carbonate Pretty Much Anything 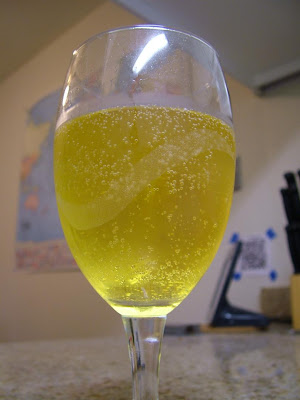 Carbonated apple juice.
This has been a project I've been wanting to do for several years, but I've always lacked the confidence to try it until after watching Ben Krasnow do many things of the same ilk.  The concept is relatively simple; soda gains its bubbly taste and much of its acidity through a process called carbonation, where carbon dioxide is dissolved into a water-based solution.  Gases are actually always soluble in water (which is why fish don't drown), but if you raise the pressure of the gas pressing down on the water (or cool the water), progressively more gas will dissolve into the water.  Conversely, if you lower the pressure, the dissolved gas will come out of solution and bubble out.

Here's a fun experiment: Fill a drinking glass with tap water and leave it somewhere undisturbed for several hours.  Notice how lots of small bubble of gas form on the inside of the glass.  Why is that?

So soda is carbonated by dissolving more CO2 into it than naturally exists in the Earth's atmosphere.  This causes the soda to bubble once you release the pressure in the bottle, and the carbon dioxide actually combines with the water to form carbonic acid, which gives soda much of the tangy flavor which you'll notice is lost when soda goes flat:

The chemistry really isn't so bad; take something water-based, add excess CO2, enjoy the pleasurable bubbly and tangy sensation you traditionally associate with soda and other carbonated beverages.

Doing this at home is very easy, but potentially rather dangerous.  Getting high pressure CO2 isn't too difficult; you can go to the grocery store and buy dry ice for about $1 per pound.  Dry ice is solid CO2, so as it sublimates into a gas, it vastly expands (there is an almost 800x volume difference between CO2 as a solid and a gas), but if you instead trap it inside a pressure vessel, it becomes a high pressure gas.

Now you just need to build a pressure vessel to contain the CO2 and whatever you want the CO2 to go into.

There's a hitch; you can't just drop a chunk of dry ice into a plastic bottle with some water.  Well, you can, but this is a traditional past-time done by teenage delinquents due to the fact that the bottle inevitably explodes.  We don't want our pressure vessel to explode.  We want to hold it at something like 30PSI for awhile and then be able to pour out our freshly carbonated beverage.  This is the problem that has previously always scared me off of this project.  With Ben's help, I've managed to come up with the beginnings of a solution to this, which prevents such inconveniences as injury or death. 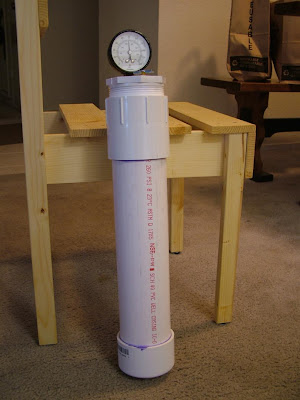 Meet my pressure vessel.  I built this out of 3" schedule 40 PVC pipe, a couple pipe fittings, a 100PSI pressure gauge, and a needle valve drain cock.  I horse-traded the pressure gauge from my ever-supportive father for helping to clean up his shop this winter break, but was able to buy the rest of it at an Ace Hardware for about $25. 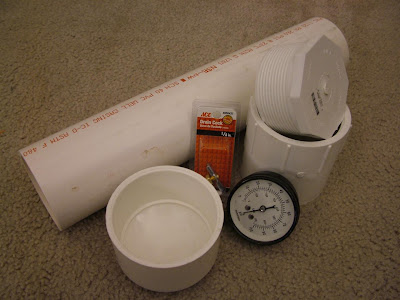 Building the chamber out of 3" schedule 40 PVC is important.  Each diameter and schedule of pipe has a different operating pressure, which is the highest pressure at which the pipe is still safe.  larger schedule numbers indicate higher pressures, so if the 260PSI operating pressure of 3" schedule 40 was too low for this, we would move up to schedule 80 or schedule 120 NPS, at the expense of higher cost and it being much more difficult to purchase SCH80 or SCH120 pipe retail.  Although 3" SCH40 pipe has a rated 260PSI operating pressure, and a bursting pressure well above that, in my calculations I derated the end cap to half that because of the two holes drilled into it for the pressure gauge and needle valve.  The PVC parts needed for this should all be easy to find in your local hardware store's gardening or plumbing sections: 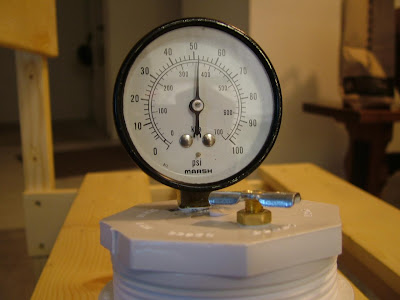 This project was the first time I've ever dealt with NPT, or National Pipe Thread.  This is a special pressure-tight thread designed for pipe fittings, which has a distinctive taper to it.  As you're wandering through the hardware store, pause for a moment to appreciate the threaded pipe and notice that it gets skinnier towards the end.  This gives the thread much more compressive force when it's screwed together than normal straight threads, which causes it to be pressure tight.  Fun fact: NPT tapers off at 1° 47′ 24″, which works out to be an inch for every 16 inches of thread, and a crazy small angle.

The pressure gauge and needle valve are really important.  Since the CO2 is trying to expand to 800 times its original volume, it is very easy to add so much dry ice to the chamber such that we will go well beyond the 260PSI limit of the pipe, and create a very impressive, if unfortunate, bomb.  The pressure gauge lets us monitor how high the pressure gets inside the chamber, and the needle valve allows us to just crack it and bleed off CO2 as slowly as we want. 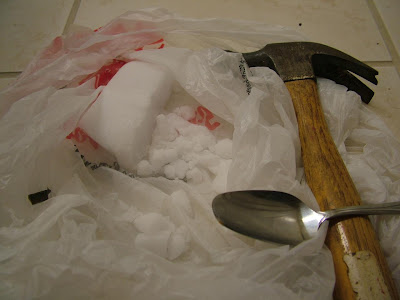 Now for the actual contents of the chamber.  There are several possible sources of high-pressure CO2, but probably one of the simplest and cheapest is dry ice.  You will need to be a little deliberate to make sure you  choose a grocery store that carries dry ice (Many carry it, but nowhere near all of them), but once you find one that does carry it, you just need to ask the cashier for 1-2 pounds of it when you're checking out; they'll go unlock the box, weigh out a chunk, and bag it for you.  You'll want to break up the dry ice into smaller pieces, since each batch isn't going to use very much dry ice at all, and it'll go faster with small pieces. 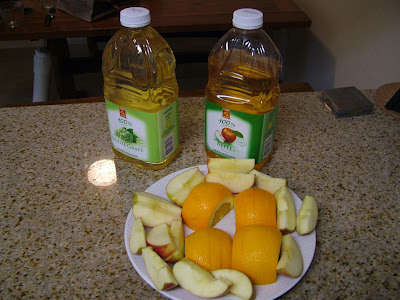 As far as exactly what you carbonate, the sky is pretty much the limit.  The classics include water (optionally with flavored syrups to make Italian sodas), fruit juices, and reviving flat sodas or beer, but anything with a high water content works.  I sized this chamber rather deliberately such that I can easily fit apple and orange slices in it.  The carbonated fruit comes out with a very intriguing sparkling aftertaste.  I only let the fruit soak for ~20 minutes, which wasn't quite long enough (they went flat rather quickly), so solid fruit would probably be something you'd want to pressurize several hours early, get the chamber stabilized, and just let it sit until ready to serve.

When filling the chamber, you will not want to fill it much beyond half way with whatever you're carbonating.  The dry ice will sublimate very rapidly, and the less head space you have in the chamber, the faster the pressure will rise in the chamber.  By leaving several cups of head room above the liquid, it becomes much easier to throttle the needle valve to keep the pressure below the operating limit of the chamber.


Fundamental problem with this setup

Generating high pressure CO2 gas from dry ice is fundamentally a problematic affair.  In the ideal world, I wouldn't have anything to do with the stuff and use a commercial gas cylinder and gas regulator to charge the chamber, but those are expensive.

The real problem is that it is very easy for the dry ice to get away from you, particularly when you're using it to charge liquids.  Water has a very high thermal mass, which is why dry ice sublimates so quickly when you drop it in the punch bowl during Halloween.  Unfortunately, the water tends to freeze on the dry ice, cause it to sublimate slower.  Once the chamber finally reaches your target pressure and you start venting it, the ice will often crack off the dry ice and you'll see the chamber start to rise in pressure quite rapidly.  During one of the batches, I cracked the needle valve when the chamber reached 60PSI, and in a matter of seconds the pressure inside the vessel pegged above 100PSI before I was able to spin the valve wide open.

A possible modification to solve this icing issue would be to separate the solid dry ice from the water entirely.  Building a second (much smaller) chamber to sublime the dry ice, and then pipe the high pressure CO2 back into the main chamber, would be much easier to control.  You would still want the dry ice to be sitting in some sort of liquid to act as a heat source, but you would then be able to use something with a much lower freezing point, such as high proof ethanol, and could even make the secondary generation chamber somehow detachable to charge multiple vessels. 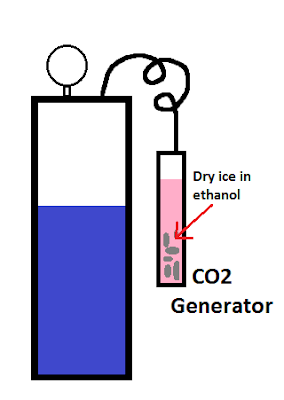 In the end, I still rank this as a rather difficult and dangerous project, and you can buy carbonation tools retail which are much much safer than this, so I won't tell you not to do this, but make well sure you know what you're doing.  I found it an interesting way to spend an afternoon; anyone else in Davis want to have a sparkling fruit juice party?