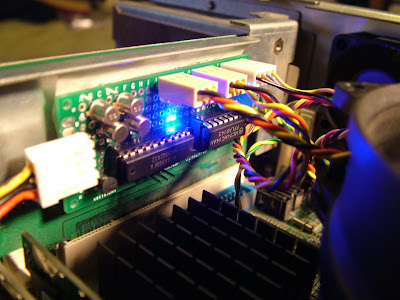 During the Maker Faire Salvage Crawl last month, I picked up a kiosk-size industrial computer for $20.  All well and good, except that the BIOS in it made no effort to control the fan speeds, and instead simply ran all three cooling fans at full blast.  This was unpleasantly loud, so I decided to simply build my own fan controller, using an MSP430, so I could easily monitor the system temperature and adjust the fan speeds accordingly.

As a bonus, while waiting for the computer to heat up, I give you a basic intro to the concept of a PID controller. 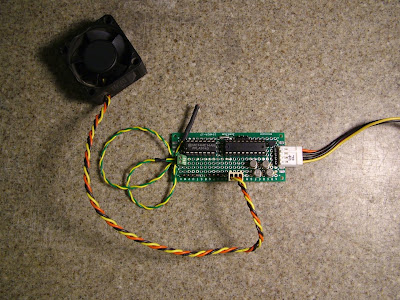 The hardware isn't too involved; an MSP430G2452 takes temperature readings from the CPU via a 10k thermistor, then uses this to set the fan speeds for the three fans. 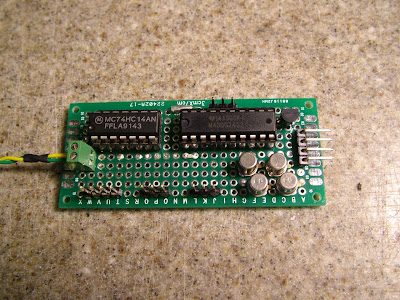 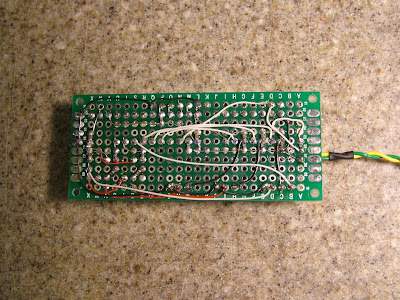 I have moved almost entirely to using 0603 surface mount passives on my prototype projects; fitting circuits on perf board is much easier when you can fit passives like resistors or capacitors between any two adjacent pins. 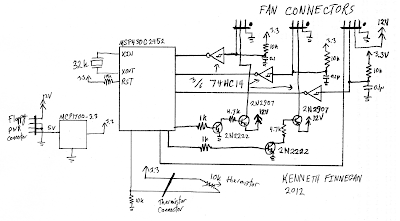 In the schematic, I forgot the input 10μF caps on the 12V and 5V lines.  The entire circuit board is powered using the standard 0.1" floppy disc power connector (12V (yellow), GND, GND, 5V (red)), since those tend to be numerous and under-utilized inside desktop computers.

One thing to appreciate when reading my code is that I have very deliberately left the control code weak.  It is currently a purely integral controller, which has many disadvantages which can be improved via switching to a PI controller and implementing integral spool-up prevention.  I'm considering revisiting this project with another hardware revision and some controller algorithm refinements, but alas the hazard of having this one "mostly-working" means that may take a while... I'll leave programming a faster temperature control loop as an exercise for the reader.