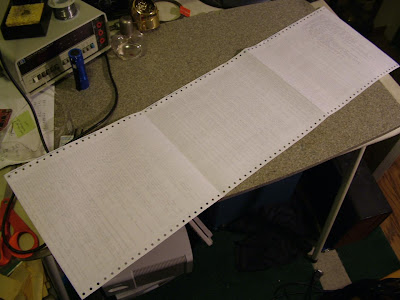 A week and a half ago, I posted about my TwitterMatrixTweeter, consisting of a BeagleBone and a dot matrix printer watching for tweets mentioning my Twitter username.  It got picked up by several large blogs, and made for a rather entertaining week as tweets spewed out of my printer.

Special thanks go out to the commenters Joshua for managing to find the NP-10 user guide (part 1, part 2), and 0x6D64 for porting the code to OSX.  Finding the user's guide was particularly useful since it gave me the "ESC - i - 1" command sequence to put the printer in "immediate" mode, where it would automatically move the paper up out of the ribbon between tweets to make it easier to read.  It also gives me all the information I need to put the printer in bitmap graphics mode, so the printing possibilities are now essentially endless once I write the drivers for it.  Thanks again to Joshua for the find. 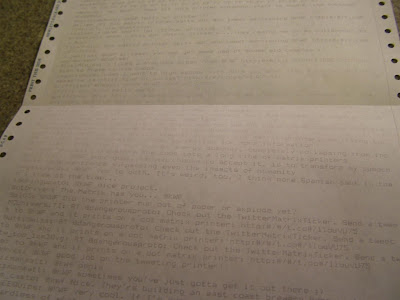 The final yield for a week's worth of tweets was just a few lines over three pages.  One thing that became abundantly clear by the end of the week was that, even though the print was still legible, the printer's ribbon really is in sad shape.  I have found some mentions that you can reink these ribbons using stamp pad reink kits, but I decided to opt for trying to find a NOS replacement ribbon for the short term, and save the old ribbon to experiment with in the future. 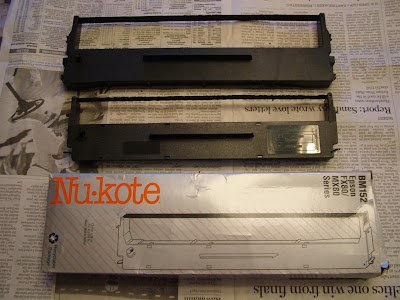 Of course, finding replacement ribbons for dot matrix printers is a little challenging, and finding a replacement specifically for the NP-10 is fairly impossible.  Luckily, these ribbon packs were originally designed to have just the ribbons replaced a couple times between entire cartridge replacements, so I really just needed to find any cloth ink ribbon that is 0.5" wide and ideally has the same single twist as the NP-10's ribbon (so that when the ribbon gets recycled through the cartridge, it turns over and the next pass uses the other side of the ribbon).  After an evening trawling eBay, I managed to find a reasonable deal on an FX80 cartridge, which looked promising with respect to its general dimensions.  If I had been lucky, these would have been a super standard size, but alas, as you can see, close but not quite.  The mechanisms in them are indistinguishable, so on the bright side I have a spare set of the stuffing gear now... 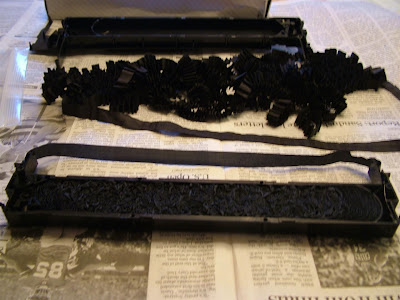 I think the internals of these cartridges are totally awesome.  There is something like 30 yards of ribbon inside these, which is literally just stuffed in one side and drawn out the other. 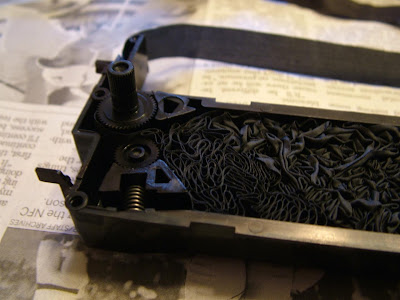 In the intake side, the knob allows for manual advancement, but the printer also has a gear drive which advances the ribbon as it prints.  Below the knob is an idler gear which meshes with the knob to force the ribbon into the holding bay inside the cartridge. 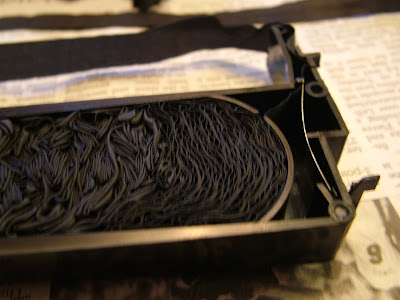 The fact that the ribbon looks all nice and orderly on the extraction end is really just because this cartridge is new out of its box.  After just one pass through the printer, this all ends up looking pretty crazy stuffed.  I'm almost tempted to try and retrofit in plexiglass just to be able to see the patterns the ribbon forms as it is recycled.

In any case, lots of newspaper, my MechE tendencies to get absolutely filthy, and ten minutes of very carefully repacking the ribbon into the NP-10 cartridge was fairly successful.  The FX80 ribbon unfortunately doesn't have the half-twist in it, so the printer will only ever use the bottom half of the ribbon, and I would eventually need to pull the cartridge and vertically flip the ribbon if I wanted to use the top half. 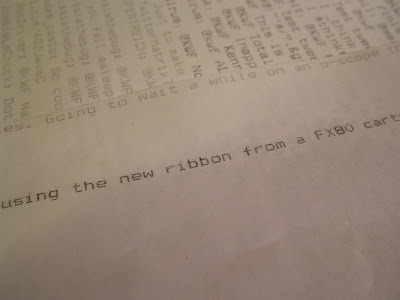 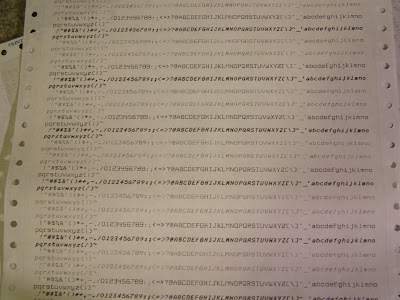 So in the end, a little TLC got this printer back into its prime for another few hundred thousand characters.  I thought it was fitting that, even for a 30 year old printer, I still ended up spending almost twice as much for the replacement ink as I did the original printer ($9 vs $5).  I've saved the old ribbon, so at some point I will possibly try and recondition it as well.  At this point, we just need to hope like hell I don't end up needing to replace the actual print head (since the wires themselves do eventually wear out), since I expect finding a compatible replacement for the print head to be somewhat more challenging.