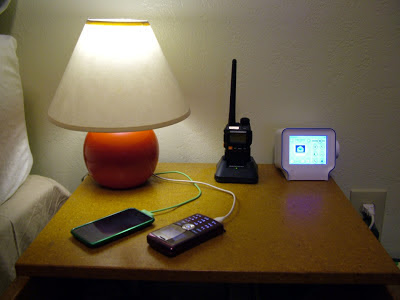 Somewhat predictably, I happen to own quite a few pieces of personal electronics that I need to keep charged. Fortunately, the vast majority of devices have moved towards the standard of being charged via USB. Until recently, I made do with charging my devices from a spread of computer ports, wall USB chargers, and the convenient USB port on the back of my Chumby. This worked acceptably well until one of my friends was visiting and went to charge his iPhone from my Chumby, which burnt out the Chumby's 5V 2A wall adapter.  Incredibly ironic, when you consider how many other ways the iPhone has already killed Chumby.

In any case, now I'm down  my most-used USB charging port, and a Chumby. I considered simply replacing the power supply and carrying on, but having a few more bed-side USB ports would be handy. I therefore opted to build myself a USB power strip. 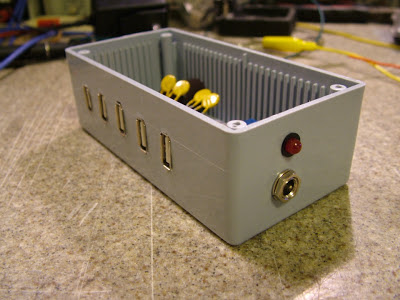 It's shown with the top cover removed. On the right is a 2.1mm barrel jack to accept standard 12V wall warts (which I've made a standard of as many of my projects as possible), and on the left is 5 "dumb" USB ports for charging devices.  Originally, USB wasn't at all designed to be a charging port, and required quite a bit of intelligence on both ends of the connection to negotiate how much power the client device can consume.  Manufacturers had no interest in spending the extra cost to make a phone charger that intelligent, so each manufacturer came up with its own bastardization of the USB spec (usually via random resistors between various pins).

This was little-to-no-fun, so the USB spec eventually caught up with reality and defined "dedicated charging ports," which are dumb USB ports where the two data pins are simply shorted together to indicate to the client that they do nothing except provide power.  Manufacturers like this because they no longer need to add a 15 cent IC to their chargers, and us hobbyists like it because shorting the two data pins together is a much easier way to build USB chargers than trying to reverse-engineer every manufacturer's creativity on the issue (see Lady Ada's work on the subject). 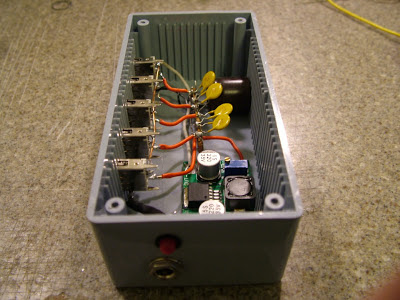 This was a quick one-evening project out of my junk box, but I've found it rather handy. The 12V input is regulated down to 5V 3A with an LM2596 switching regulator module, which can be had on eBay for less than $2 shipped. At $2, these modules are a great deal, and I've found them handy to have laying around for projects like this, but you do need to appreciate what you get for $2. When received, this board had several cold solder joints, which made for frustrating intermittent operation.  A quick going-over with a soldering iron solved this issue, and it has been running fine ever since.

The one point of interest that I added to this was 600mA polyfuses to four of the ports. These are solid-state fuses that don't permanently blow, but will reset themselves after the load is removed. I left the fifth port un-fused, since I'm using it to power my Chumby via a hacked-together male-USB-to-whatever-tiny-barrel-connector the Chumby uses. The Chumby typically only draws 0.5-0.7A, but will momentarily draw in the >1A range (particularly while booting).


In hindsight, the fuses were a good idea that work out great, except that Apple seems to hate every spec they didn't invent themselves.  Dedicated charging ports are unable to digitally tell client devices how much power they can deliver (500mA? 1A? 2.5A?), and instead simply shut down the port when this limit is exceeded. It is then the client's job to figure out where this limit is and to do the best it can to stay below it.  It appears that in the case of my 4G iPod Touch, when it sees the USB port's voltage start to droop below 5V, instead of reducing its current load like it should, it simply displays a notification "Charging is not supported with this accessory" and gives up.  This means that when my iPod happens to be discharged far enough to draw >600mA when I plug it in, instead of waking up to a charged iPod, I get the pleasure of discovering that it instead gave up after a minute and sat there doing nothing all night.

I haven't had any issues with any other devices plugged into these DCP USB ports, and hopefully future devices will tend to be more standards compliant. Shown in the first picture of this post is this power supply charging my iPod 4G, my EnV3 dumb phone, my BaoFeng Amateur radio, my Kindle (on the bottom shelf out of view), and running the Chumby, all at once. This was certainly one of those DIY projects where I have the satisfaction of using this every day, and with the exception of Apple being a bunch of jerks, has made my life better. Having 5 USB ports next to my bed is nice, and has the added advantage that if I ever lose power (due to natural disaster, etc), re-purposing this to run off of any 12-35V DC power source is trivial.