One of the courses I'm taking this quarter at Cal Poly is an Introduction to Computer Networks course, where we learn about the 7 layer OSI model, and then learn about how networking works from the bottom up. Like most Cal Poly classes, this includes a lab, where we take a bunch of Ethernet cables and Cisco gear (thanks Cisco!) and run around for a few hours to hopefully learn something.

The lab this previous week was an interesting one where we had 1,000 (virtual) devices all send traffic at a network switch all at once, and see how quickly and intelligently the switch can process all of this traffic. Moving packets between the Ethernet ports was no issue for the switch, but where it choked was processing Ethernet frames from devices it had never seen before.  While any decent network switch can move a couple million packets between physical ports, when a new MAC address passes through a switch on the network it needs to do a little more processing to remember where this MAC address came from.  This "MAC Address Learning" is a nice feature of switches, such that they only send traffic down the single link towards it's destination instead of all four, eight, 24, or 48 ports connected to the switch. This greatly multiplies the effective throughput of any switched network by freeing up the bandwidth of every other link to do other useful work.

Long story short, while a switch can move millions of packets, it can only learn a few thousand new MAC addresses per second.  This isn't particularly important, since having more than maybe one or two dozen MAC addresses on one L2 home network is rare, and even in a large network you won't see thousands of MAC addresses join or physically move in the network in a second.

I also happen to be the only EE in this CPE/CSC class, which even with 60 students is evident to the point where the professor has opted to call me "the EE guy" in lieu of learning my name. This lab piqued my interest in the internals of a network switch and why it can switch frames orders of magnitude faster than it can process them, so since I'm the only person in the classes who soils himself with physical hardware, I figured I should tear one apart and see what an Ethernet switch looks like. 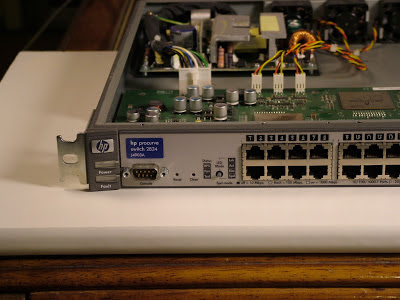 Of course, the Cal Poly CPE department would probably be pretty displeased if I went into the networks lab with a screw driver and went to town in one of their switches. Luckily, I have a level 60 junk box with a +5 against finding random electronics, so I just so happen to have a spare HP ProCurve 24 port Gigabit Ethernet switch sitting in my closet. 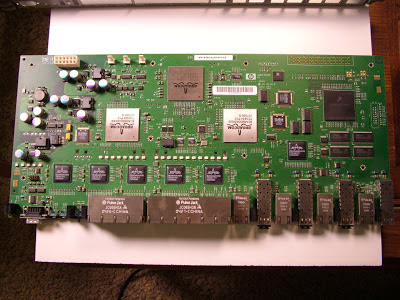 Starting with a bird-eye view of the switch's entire motherboard, the system can be roughly divided into three sections.  (Note: all of these pictures can be clicked on to see much larger versions, and I'm including both the diagrammed and unmolested versions of the pictures, for your enjoyment.) 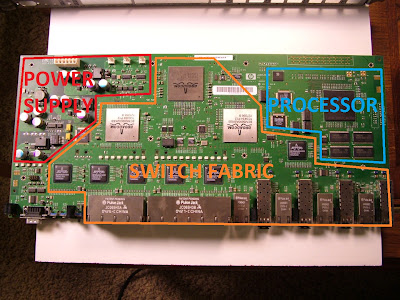 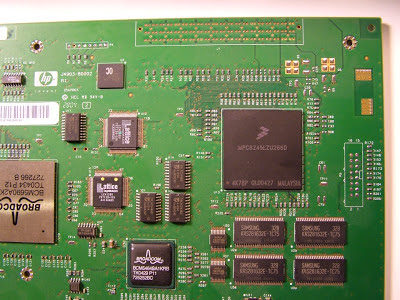 There is nothing particularly exceptional about the processor, which is reasonable considering that once the switch is up and running the processor has relatively little to do.  Low-end Ethernet switches (that any normal consumer would use) actually forego having a processor altogether and instead use the "unmanaged" feature of the switching fabric, where a fixed configuration is read off of an EEPROM. With enough effort and a will to void the warranty on your Ethernet switch, it is theoretically possible to modify the contents of this configuration EEPROM to make the switch fabric do something different than the default (i.e. VLAN tagging, etc). In reality this is usually pretty difficult, because the switch fabric manufacturers make it difficult to get your hands on a full datasheet, and doesn't make much sense (since subsequently modifying any of these settings requires physically opening the switch and reflashing the EEPROM again). 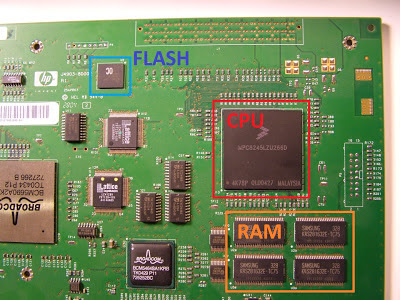 A couple other interesting things to note about this portion of the board is the 16 pin header on the right, which is likely a debugging or in-circuit-programming port for the PowerPC, and the eight pin header above the flash chip, which was used to program the flash during system manufacture. Also interesting is the huge three-row connector not populated along the top edge of the board. If you look at the switch's case, you'll notice that this area is clear and open all the way to the back of the cabinet, which means that this is likely an additional option or feature to allow expansion cards. I've seen these connectors and cards before, but can't remember their purpose or the name of the bus at the moment... 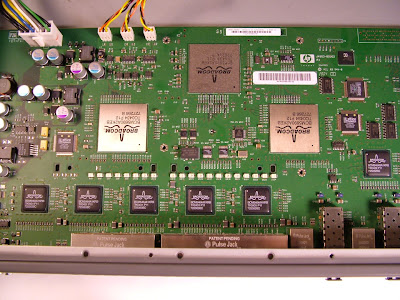 Moving to the center of the board, this is where the heart of the switch is built around a number of Broadcom ASICs (Application-Specific Integrated Circuits) which are designed solely to be the core of really high-end switches like this one. The switch fabric is separated into three general layers: 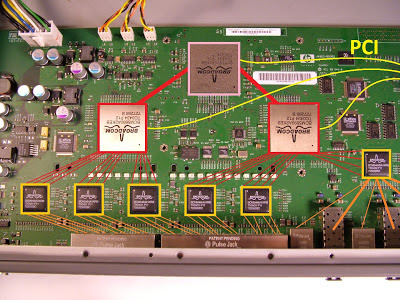 Don't you enjoy these gorgeous MSPaint diagrams I've made for you?

Note: The indicated bus connections between ICs (GMII, XAUI, PCI, etc) were drawn entirely from dead-reckoning. The switch's PCB has an unusually large number of layers, so none of the feed lines between ICs are actually visible. The links I have the greatest doubt about are the two lower PCI links. I'm not convinced they necessarily exist.
So that is how all of the internals of a 24 port managed switch interact with each other at the system level. The processor is surprisingly under-powered, but only handles clerical tasks with respect to switch configuration. The switch itself is a multi-layer tree consisting of physical transceivers, 1Gb switches linking 12 ports, and a 10Gb switching fabric back plane linking multiple switches.

This is a great demonstration of the advantages to specifying these MII buses of various speeds to abstract and separate the MAC and PHY layers of Ethernet equipment. It allows different PHY transceivers to be used in different system configurations while still using the same switching chip set. It also allows two peer MAC devices to connect at bus speed with no PHY transceiver at all. In the case of this switch, the XAUI MII variant was used between the two levels of switching, but the same principle is even applied in consumer equipment, such as early models of the quintessential WRT54G(L) home router / switch where MII is used as the link between the six port 100Mb switch chipset and the BCM4712 processor, for routing between the various Ethernet domains. 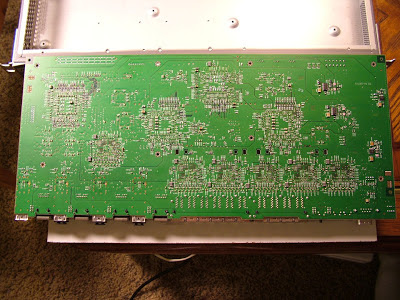 As one last bonus for making it all the way through this wall of Ethernet switch theory, I give you some pictures of the back of the motherboard. 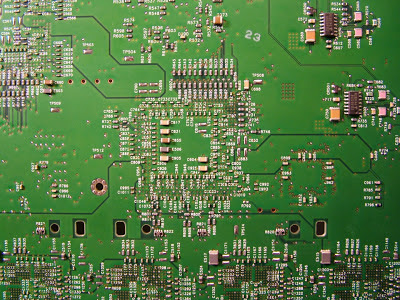 Interesting things to note, which are relatively off-topic for this post: