Spent the Day at the Western Railway Museum

So since this is the first weekend of the quarter, I decided to take advantage of my general lack of challenging homework and spend Saturday working on the track crew for the Western Railway Museum. Granted, the WRM is in the middle of nowhere, but those are the best kind, and a 50 minute drive sure beats a 6-8 hour drive to Portola.

This was the second time I've worked down there, the first time being this past summer with my dad. The drive from Davis was pretty exciting, if by exciting, you really mean terrifying. After I turned onto 113S from 80W and got out of Dixon, I hit a fog bank that went pretty much all the way to Rio Vista Junction. That wouldn't have been that bad, except there is a 90 degree turn in the middle of 113. 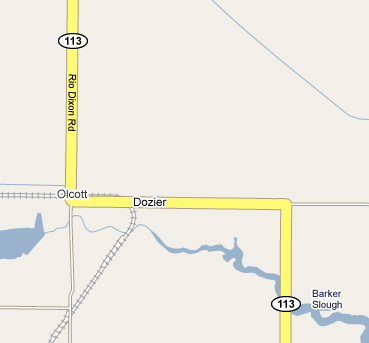 I knew it was coming, but it still caught me by surprise in the fog, and there was a freakin car parked right where I wanted to completely miss the turn and go straight, but I managed to not hit it (freakin car! who parks their car in the middle of the dirt road in the middle of nowhere?!?). Lesson learned; when it's foggy, be an ass and go 25mph, not the speed limit, or the 35mph that I was going, which still wasn't slow enough.

Once I got to the WRM, I met up with Joel Cox and the rest of the track crew, and we got to work. First order of business, get one of the shed doors closed that had hung up on itself. This meant moving a lot of maintenance of way equipment and a steam engine tender. All of the MOW equipment could be moved under their own power, but for the tender we had to get out the 44 tonner diesel (which is the only non-electric engine they have). It was interesting to finally see a 44 tonner running, and Joel even let me run it (under his close supervision), which was impressive since this was my second day. Once we had all the equipment moved, we brought a forklift in, took the weight off the cabled holding the door up, disconnected them, and lower the door.

The next order of business, which took up most of the day, was replacing broken joint bars out about two miles on the main line (WRM has 22 miles of right of way! Lucky ducks!). Joint bars are the plates bolted to the ends of pieces of track to hold them together. The five of us worked a good five hours on this, and managed to get aboout eight bars replaced, which is a healthy rate. The fact that it was foggy in the morning didn't help, because now the track was cold and a little shorter than it should be, making lining the holes up quite a challenge.

Over all, it was a good day. It's always refreshing to get to go out there and work my ass off for a day and be able to come back and say I accomplished something. One of the guys even gave me a CD with pictures of the crew from last year, which included a few shots of my dad and me when we were there in July. 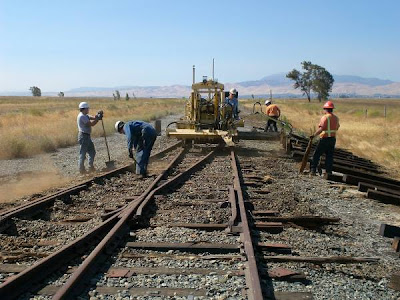 That is Dad and me on the left, and Joel running the tie puller inserting ties on the track. In July, we replaced rotted out ties that had been reduced to little more than tanbark. Of the 20 ties we replaced, we probably got eight big chunks of wood. The rest was removed with shovels. One of the guys found me one of the nails they used to put in the end of the ties to indicate which year they were installed. It was from 1945.