I was bored last week and pulled out the toroid I had wound last year for the ever popular Joule Thief. There is many dead AA batteries in our apartments future thanks to the joyful presence of a Wii and the entertainment that follows it. 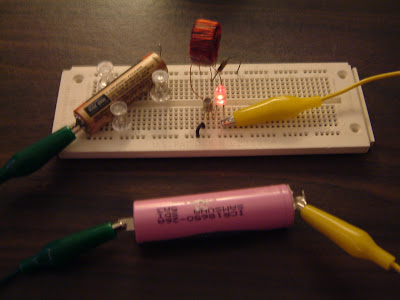 One thing that I am doing with it that is somewhat interesting is that I'm charging a set of Lithium ion batteries I salvaged out of one of the laptops Michael gave me over Winter break. Li-ion batteries are weird; each cell has a charging voltage of 4.2V. Even with only 0.5V from the AA, hooked to a capacitor, the circuit develops about 15V, and at 4V charges the cells at about 8mA, which isn't much, but is also quite safe for the cells. My plans for the Li-ions is to make them into 3 cell bundles as a 12V pack. Not really ideal, but until I get my (cheap) hands on a lead acid battery, they'll be the best I can do in that department.

I'm really only using the LED as a diode, with the added advantage that it gives a relative current indicator (and when the battery has fallen out of my hacked together holder for it). For better performance, one could use a lower bias vanilla diode instead.
The toroid was a random one I salvaged from some piece of junk that crossed my desk. Standard magnet wire at 30 turns for both sides. Rumor has it that having mismatched coils will give it better performance.
The transistor is a 2N2222, just like it should. Buying 100 of those was an outstanding idea.