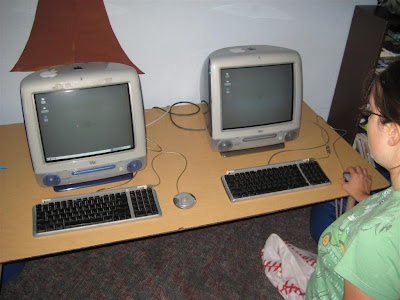 My sister, Kristina, has a summer job teaching at a local daycare. Her classroom had two imacs in it that still ran OS 9, but unfortunately, one of the kids had set passwords on them, then left or forgotten it, so there was no way to use them any more. All Kristina wanted was something with a word processor, and maybe some games. Sounds like a perfect fit for Linux if I've ever heard one.

Hardware:
So hardware wise, what have we got to work with? One graphite and one blue 3G Imac, which had 10 / 13 GB hard drives, and 128 / 192 MB RAM. That is a little tight, but still definitely useful if you're careful about how you set it up. Once running, I was able to browse reddit and check my email on them no problem.

Software:
Of course, the CD drives didn't work, so I got more practice netboot installing PPC Ubuntu. One of them wouldn't get the boot filename from my DHCP server, so I had to pass that to it in openfirmware (boot enet:0,yaboot instead of boot enet:0). I partitioned the systems 5GB XFS for root, and the rest for home, also XFS. I used XFS because, like most PPC hardware, the clock batteries are dead in these systems, so when the power dies and the clocks reset to 1903, I don't want the FS to sit there and fsck because it was last mounted in the future. Considering how lightly these systems are going to be used, it doesn't really matter how fast the file system actually performs, as much as how quickly it boots when the kid sits down. Didn't feel fancy enough to setup NFS between them, though in a more serious installation, that could be an option to have saved files available on both.

128 MB of RAM is too little to run GNOME, so I only installed a command line system and built a GUI from the ground up. For some reason, the Imacs were only displaying 16 colors, so slim looked awful, and auto-login wasn't working anyways, so I switched slim out for xdm, which looks fine (grey FTW). This means that the students have to type in the username and password (both creatively set to student), but that's not a big deal. I created a teacher account during the install process, then adduser'ed the student account so it wouldn't be a sudoer, and now will be even harder to do any real damage with (just being Unix based by itself helps make it damage resistant, they'd have to know what to type in!).

On top of xdm, I installed xfce4. I looked at using some of the ridiculously light window managers, like fluxbox, etc, but felt that they were just a little too foreign for children in a classroom. I've also never liked Xubuntu; it always seems like it tries to do everything Ubuntu can, so it's not *that* much lighter than Ubuntu proper. I figure that if I can run Xubuntu on a system, I may as well just go with Ubuntu, be loads more comfortable with the same wm I use on everything else, and deal with a little more slowness. Xubuntu would also be rather overkill for what I need, so xfce4 proper it is.

At this point, I had an entirely working GUI, with absolutely no programs in it. Beyond some simple utilities like a calculator and a picture viewer, I installed three major programs. Abiword, along with all the plugins (why not?) as a functional, yet light, word processor. For games, I installed gnome-games, which seemed to work surprisingly well on 400MHz systems, and here is the real gold mine, sgt-puzzles. They lack some polish, and it's not always entirely clear what you're meant to do, but it's a huge number of small, quick puzzle games, perfect for a classroom.

The whole setup took about two to three days, and after setting them back up, the students have been using them all week with no problems I've heard about. One boy told my sister he was very happy with the new computers, because they old ones only had one game on them, but now they have a million! I appreciated that.

Here is a final list of everything I installed on top of a cli system.
Anything else you think would be perfect to have on old slow machines sitting in a classroom? Please write in the comments.