Things have been totally crazy as of late, which is why this post is two weeks late, and none of my other projects have progressed, much less been written about.  I just finished finals four days ago (though am not done with all the papers I need to have written for the quarter), and start work as a mechanical engineering intern at Lam Research tomorrow morning developing silicon fab equipment (which I won't be able to talk about at all, sorry).

Memorial day always marks the start of the operating season at the Western Pacific Railroad Museum, so I decided to take a break from school and spend at least the first two days of the three day weekend up at the museum.  Conveniently Davis is between Sunnyvale and Portola, so Friday afternoon Paul took the afternoon off work and picked me up after my Friday lecture.  I loaded all of my equipment (including my cameras) in the truck, and we were off for Portola.

Once we got there Friday afternoon, we met Lew and Don.  The yard wasn't set up for operations yet, so we had to do a little switching before dinner.  Since I brought up my cameras, I decided to try and do some time-lapse of the whole experience.  Framing time-lapse shots in something as dynamic as yard switching is challenging, so I did the best I could.


We needed to move a flat car that was set on the East lead over to the west end of the yard to be out of the way, and set one of the other locomotives into a siding to clear the main.  The ground crew consisted of me in the jeans with the hard hat, and Paul (my dad) in the yellow rain gear.
0-30s: While I set up the camera, the rest of the crew started up the locomotive
30s: Yes, it started hailing on us
49s: We had some trouble getting the brakes to release on the flatcar, due to there still being air in it, which I had to climb over and release.
1m26s: It didn't quite fit where we hoped, so I made a phone call to figure out where to put it.
2m17s: Flat car is finally out of the way.  Camera moved to the locomotive to go handle the 2873, which is still in the way.
3m38s: 2873 is spotted out of the way. Now to just go spot the 1100 (which we're running) back on the East lead and we're done.

Saturday kicked off the operating season, and it was a pretty good day, crowd-wise.  Since there wasn't anything pressing for me to do mechanically, and the operations department was short one qualified man, I spent the day working as the instructor brakeman.  We had four (!) students show up, but Neil and Ted had signed up previously, so they were the ones that got to work for the day (which is why you should always sign up to work).  Luckily, since this was their first day, I was able to take the other two students, Zach and Ken, out with me for the first hour and a half, which was static hands-on instruction on how to safely get on and off moving equipment, what the basic hand signals are, etc.

I spent the rest of the day just working with Neil and Ted, and had a good time working with both of them.  At the end of the day, I got to present both with their first student cards, putting them well on their ways to being a qualified member of the crew. 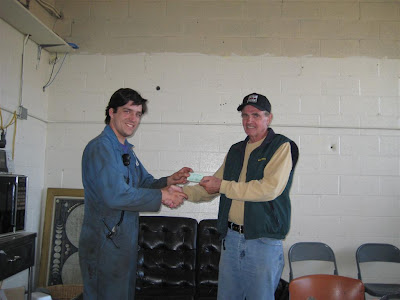 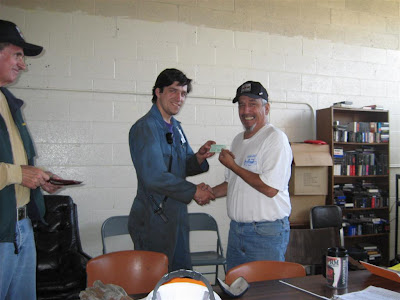 Congrats Ted!
After the safety meeting Saturday evening, we decided to go out and do some yard switching with our new students.  Paul gave me the switch list of switching two of the cabooses in the passenger train (which we later switched back).  I took another time lapse of the whole thing, from on top of one of the other locomotives in the yard.


Ground crew: Myself in the jumpsuit and hardhat, Lew in the heavy jacket, Neil in the light jacket, and Ted in the white T-shirt.  I'm the conductor for the move, which is why I was doing relatively little running around.  Watching this video after the move, we played a fun game called "Count the number of times Kenneth violates the red zone."  It was my first day back, so I was doing some relatively unsafe things while we were switching.  More importantly, we discussed it later and all learned from my mistakes, right?

On Sunday, a few more qualified crew showed up, so I wasn't needed for crew.  I spent the day wandering around doing some little maintenance jobs.  I tried to fix the BBQ, which wouldn't light the day before, but Vickie had beaten me to it.  I then went out during lunch break and adjusted the brake riggings on the 608, which had gotten its brake shoes replaced, which meant the brake pistons weren't traveling as far as they should be.  I meant to take some photos of this, but was having so much fun, I forgot.  I then spent the rest of the afternoon helping Rod sort chains and generally clean up the road boxcar for the season.

After Paul got out of the safety meeting for the operations department, we packed up our stuff and bid farewell to another weekend at the Western Pacific Railroad Museum so I could get home and work on my final projects for school.  Next time I'm planning on being up is on July 11th to celebrate my birthday, which I'm looking forward to.