Build Your Own Cloud Chamber

This last weekend, I had one of my friends down from Davis to experience the awesomeness that is the South Bay.  In addition to the typical Halted, Excess Solutions, and Weird Stuff, we also spent a day each going to the Exploratorium and the USS Hornet, which are both very good museums (Another we wanted to hit was the Computer History Museum, but they're closed for construction).  While at the Exploratorium, we saw an enormous cloud chamber, which is a device which allows you to see charged particles with the naked eye.  Theirs was quite big, being about the size of a desk, but I thought that even making a relatively small one would be pretty cool.  Marissa had to get back to Davis for work, but my best friend Jeff from middle school (Nine freakin years ago!) is back from Chicago for the month, and he's as big a nerd as I am, so we decided that today was a good day to try it. 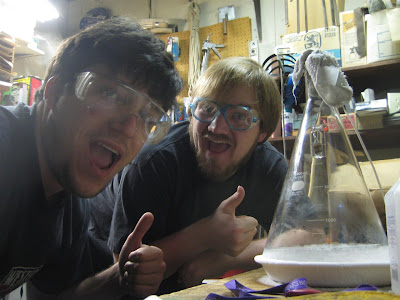 The principle of operation of a cloud chamber is based on triggered condensation of saturated alcohol vapor.  In a closed container, you warm liquid alcohol on the top, then cool the bottom with dry ice.  As the alcohol falls to the bottom of the chamber and cools, it begins to condense, but it needs something to condense on, much like rain.  The typical trigger for this is dust, but once the air in the container becomes relatively clean, other irregularities start to trigger the condensation.  It turns out that alpha and beta particles, and muons, which hit the Earth all the time, slightly ionize the air as they pass through it, which is actually enough to trigger the alcohol to condense along the particle's path as it decelerates.  These alcohol trails are short-lived, but clearly visible with the naked eye (if not my video camera).

It actually worked!  This video was taken at the end when we finally got it working, which means I had spent the last three hours inhaling IPA and CO2 fumes, so pretty much ignore everything I say about which particles you're seeing; I'm wrong.  Just read the Wikipedia article for it.

Starting at the beginning, Jeff and I had no idea what we were doing.  I read a few vague articles on the principle of operation, but we had no real solid plans or expectation for it to work. 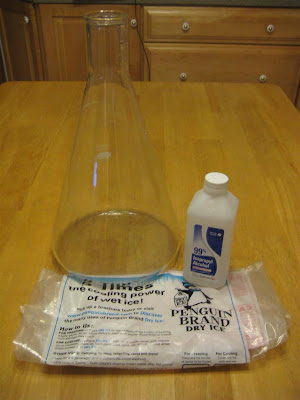 First step was collecting the materials.  Only critical parts are a container, some form of alcohol, dry ice, and some black paper.  For the container, my dad happened to have a 4L Erlenmeyer flask from his chemistry days at Berkeley, which was perfect for this project.  Different articles said different things about which alcohols you can or can't use, but we found a 16oz bottle of 99% Isopropyl alcohol at Safeway, and that worked for us.  We also bought 6lbs of dry ice at Safeway at $1.49/lb, which was pretty easy (just ask for a brick of ice at a register and show ID).
We decided to try and have a heated alcohol reservoir like they had in the Exploratorium instead of just soaked rags or paper, so we went to Halted and picked up some power resistors and a sample vial.  We didn't see much difference between this and just a hand-warmed rag, so I wouldn't recommend bothering with this unless you want to run it for a long time like for a science fair. 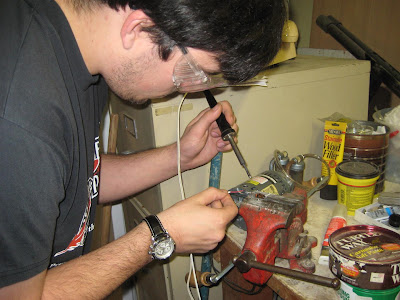 Soldering together a crude immersion heater. 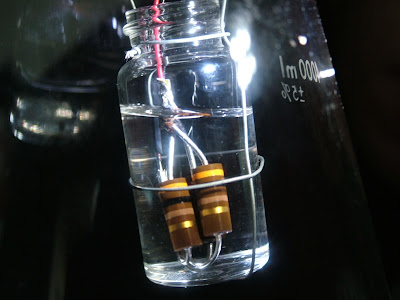 The final heater in the sample vial of alcohol, hanging in the top of the flask by some light baling wire (family go-to tool, even two generations after moving from Montana).

Once the alcohol source was taken care of, the next step is to cool the bottom of the flask to cause it to condense again.  Our first attempt was by adding crushed dry ice into the flask, but this didn't work, causing a ton of turbulence by the subliming ice. 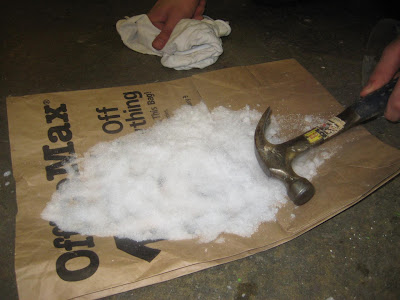 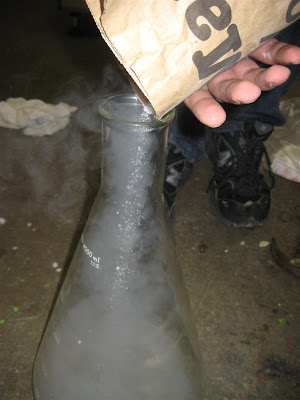 This is wrong; don't put the dry ice in the container. 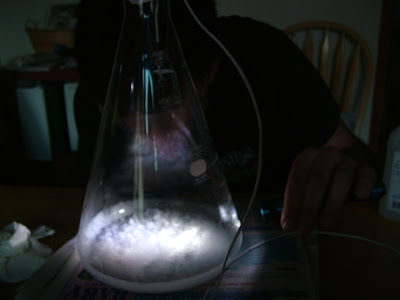 This also didn't allow us to use the black paper on the bottom of the flask, so we tried again instead placing the dry ice in a pie pan around the flask.  This removed the turbulence problem, and we started seeing falling droplets in the flask. 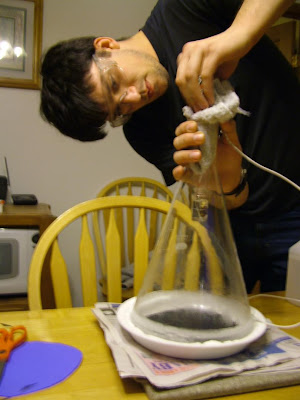 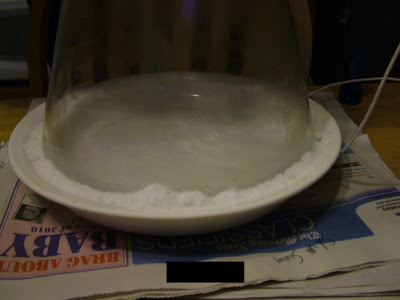 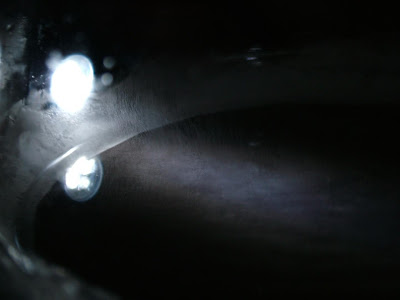 This got us very close to a working cloud chamber.  The final trick was that it is CRITICAL that you have a standing pool of alcohol on the bottom of your container.  Without this pool, it's impossible to generate the saturated layer you need to see the alpha and beta trails.  After each time we opened the flask and adjusted something, it took about ten minutes for the flask to cool down again and form the temperature gradient from top to bottom needed.

So the tricks here are:
Overall, it was a very cool project, and at only $2 for the IPA and $10 for twice the dry ice we needed, it isn't that expensive of an experiment either.


Of course, once we had had enough electron spotting, we had to do something with the rest of the dry ice. 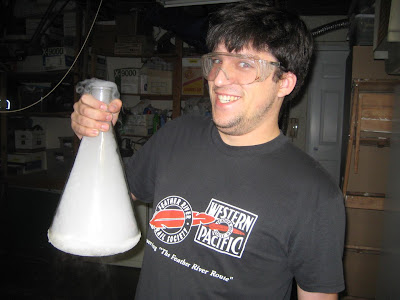 
This may or may not have ended up with me managing to freeze a pie pan to the garage floor for several hours before the rest of the dry ice sublimed away...