Four-Three-Oh has been doing features of people's workspaces, so I figured I would jump on the band wagon and post some quick shots of mine. 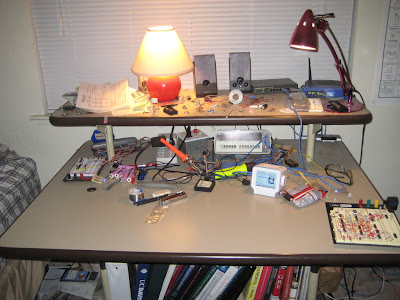 This first shot is my main electronics desk (yeah, cause I've got several desks squeezed into my apartment, like a boss).  The desk itself was custom made at a local machine shop in Sunnyvale.  There are two holes (you can see one to the left of the spool of solder on the main surface), which I can insert a crank handle into to raise and lower the desk from anywhere between very low and standing-desk-for-someone-short, which isn't quite me.

On the desk itself, from left to right, is the control panel for my apartment lights, some random Li-Ion batteries, a power strip and switch box, which I use for my cheapo Weller soldering iron, which is sitting in a Radio Shack third hands, an HP 3435 multimeter, my Chumby One, some chocolate chips (I freakin love chocolate!), and my final project for EEC180A Digital Systems.

The top level has a bunch of random class papers, lots of random pieces of wire and passives, an eight port gigabit switch, and my main WRT54GL (of six) [1] [2].

On the book shelf below the desk is all of the text books for my classes at UC Davis.

Not shown in this picture is the desk to the right of it, which has my main desktop computer on it (running Ubuntu 10.04), and 20 feet of textbooks not for class, but personal use (computer science, electronics, metallurgy, welding, civil engineering, battle tactics, science

, etc).  Also not shown is my walk-in closet, in which I only have three shirts, but a ton of boxes of cables and wires and e-waste, and 5 digikey boxes FULL of components for projects.  My closet just kind of becomes the dumping ground for stuff... 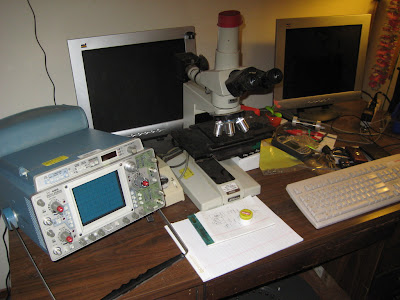 This is my third desk, which has some of the bigger equipment on it.  On the left is a 7MHz Tectronics scope, which was new in mid-1970's, so the fact that it has digital memory is a big deal.  Next to that is a 1000x metallurgical reflective microscope, which I don't use for anything more serious than just looking at stuff (see below for some pictures from it).  Not much else of interest except for another computer (of the eleven I happen to own, most through people giving them to me), and spare monitors.  Right behind the scope is our Femtocell miniature cell phone tower, which gives us much better cell phone reception throughout the house through our internet connection.

I've never tried taking pictures through the microscope before, but these turned out pretty well, so I might try this again some time.  These are both pictures of a penny at 1000x magnification, which is more impressive than it is useful, due to the tight focal depth and almost instant motion sickness when you use it this high.  It has 5 optics, for 100, 200, 400, 600, and 1000x, and I usually just use the 200x one.

It was originally designed for looking at 3" wafers, which have gone out of style, so living in the Silicon Valley means I actually managed to snap this thing for free. 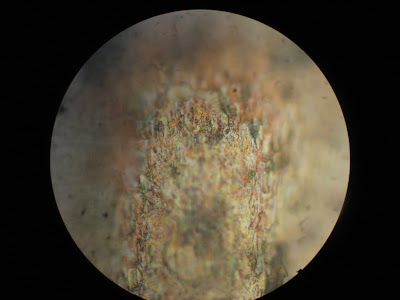 That is old Abe's head on the penny. On the back. In the Lincoln Memorial.  Yeah, the statue in the middle.  His shoulders are just below the frame. 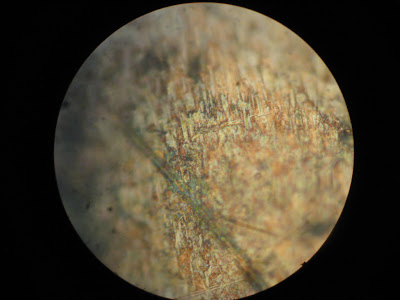 This is just a random close-up of a flatter part of the penny, to show how you can see the crystalline nature of the copper no problem.  Playing with this while growing up really made the whole concept of metallic crystals in Properties of Materials less of a big deal...

I will definitely spend the rest of the month (yay no more school!) working on getting some good shots of stuff on this thing.  I haven't played with it in a while.