The eZ430-Chronos is a development kit released by TI last year that consists of a watch, a programmer, and an RF dongle, allowing the watch to wirelessly communicate with a computer over an ISM band of your model choice.  I bought one when they were first released, and started to do some interesting things with it.  Unfortunately, it was somehow misplaced over the summer, and that was the end of my experiments with it.

Of course, I didn't lose the USB dongles that come with the kit, so I still had those, and no watch to use them with.  The programmer is probably useful as a standard eZ430 FET, but the real value is most likely in the RF dongle.  It's a CC1111-based radio, meaning that it can quite easily be built into any kind of ISM to USB adapter, with the right firmware.  The first trick is, of course, being able to reprogram it.

The first application that comes to mind is talking to IM-MEs, which use the very similar CC1110 SoC radio... 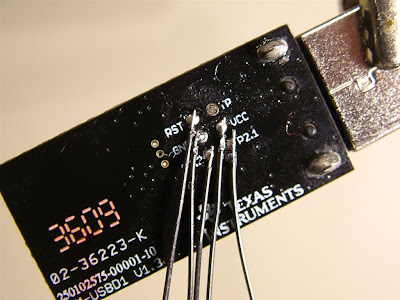 Conveniently enough, the RF dongle exposes all of the programming points on a 2mm 2x3 grid on the bottom of the board.  Solder tacking some 32 gauge wire to the required pads allows them to be plugged into any CC programmer, one of which is the GoodFET, which I happen to be selling assembled boards for.  I wrapped the other end of the 32 gauge wire around pieces of 20 gauge wire and soldered them there to allow them to plug into the female header on my GoodFET. 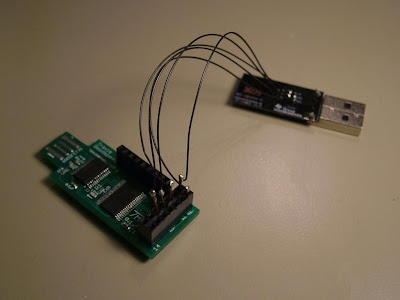 Reprogramming is then just a matter of using the GoodFET client to back up the old program, erase, and flash whatever hex file you want on it.

If you forget to backup the RF dongle code for the watch, and don't want to bother recompiling it, here is the original hex file, which doesn't support the new RF BSL feature, but will get you the standard communications system.