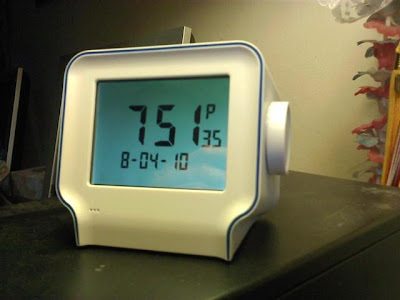 In case anyone else needs a low-performance TFTP server on their Chumby and doesn't want to be bothered to go through all the work to cross-compile it from source, here's the fruits of my labor.  TFTP is a very simple file transfer protocol, usually used for booting hardware over the network.  I use it all the time to install Linux on my computers so that I don't have to bother burning install CDs every 6 months.  I don't leave any of my Linux desktops on ALL the time, so I decided to migrate my TFTP server to my alarm clock so it's available all the time.  This was primarily prompted because I've been spending some time bidding on Polycom IP500 SIP phones on eBay, and they require having a TFTP server on the network to just turn on.

Tarball binary for download.
Having it on a USB drive would have been the simplest, but I'm partial to installing software on the Chumby's microSD card, like I did for my http server.

To install, ssh into the Chumby:

Configure it to start on boot by adding the following line to /psp/rfs1/userhook1 and reboot:

Add any files you want available via TFTP on your network to /mnt/storage/tftp/var.

I compiled this from source for tftp-hpa 0.44.