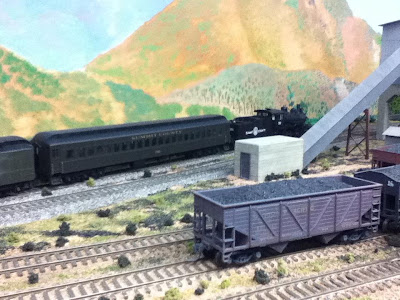 School and life have been pretty crazy as of late, in case anyone hasn't noticed the precipitous drop in post frequency already.  My roommate decided to offer me a break from my school work this weekend and invited me to her dad's ops session on his HO model railroad layout.  Of course, I'm a big train fan (being active in both the WPRM and WRM museums), but modeling hasn't appealed to me in a long time, since it's pretty hard to beat 12 inches to the foot in detail or realism.  I didn't really know what to expect, but boy was I impressed. 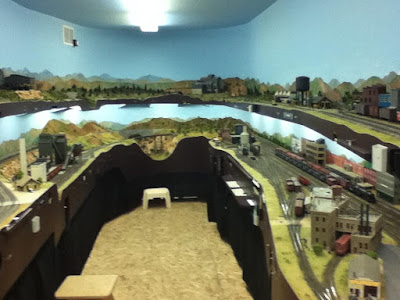 First lets talk about Phil's layout.  The women of his family were kind enough to allow him to go off and build his own man cave, separate from their house; talk about living every man's dream.  This second picture shows about a quarter of the envisioned layout, and something like 90% of what's built so far.  He's targeting 1950' era Union Pacific branch line, which is about ten years early for me (much too many steam engines still running around for my taste, but he did have two token EMD and Fairbanks-Morse diesel switchers in the yards).

The entire layout is DCC controlled, which is an incredibly elegant system which uses modulated AC in the tracks and then individual microcontrollers in each locomotive decoding these command signals.  This means the entire layout can be wired as one electrical block, instead of the traditional system where you electrically isolate every chunk of track that you want to operate on independently using DC.  Each of the operators then have their own throttle keyed to the ID number of their locomotive, so as they issue speed commands, the commands are sent to all the locomotives, but only followed by the one matching the programmed road number.  Add in that the throttles are wireless (915MHz ISM), and it means that you can drive from one end of the layout to the other, while walking around with your train, without having to worry about other operators, beyond them not physically being in your way. 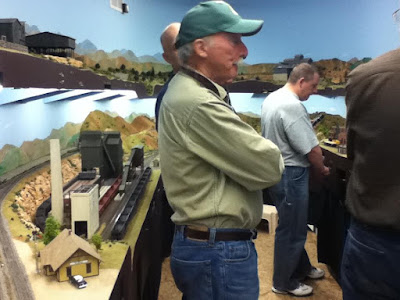 The layout being DCC became important once you put ten guys in the room, because some of the rail yards started getting pretty crazy with two or three operators working them at once.

I have done plenty of hours of actual yard switching, but I had never been to a model ops session before, so what came next I certainly didn't expect.  It turns out there there is a dispatcher in an adjoining room, but in the 1950's wireless radios weren't particularly useful, so Phil actually has hard-line telephone handsets under every station that you can pick up and talk to the dispatcher on (a few of the handsets can be seen in the second picture above). 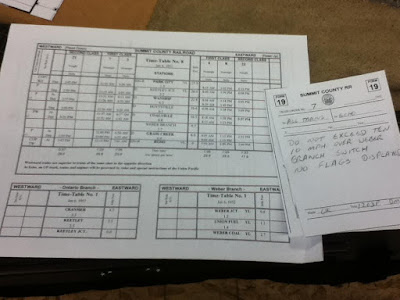 Furthermore, Phil had timetables printed up for the "scheduled" trains on his layout, following wall clocks running at 4x real time speed.

This meant that as an operator, I was handed a throttle and assigned a locomotive, and keyed the locomotive road number into the throttle to take control of it.  I then answered the ringing telephone under the table and spoke with the dispatcher in the other room, who assigned me to train #22, gave me special instructions for the run (a slow order by the Weber Branch), and authorized me to take the main line following the prescribed timetable.  Once I reached Wanship, I knew that I was going to meet the Westward #21 so I went into the hole and waited the 20 minutes (5 minutes real time) before being passed by it.  I then continued onward to my final destination of Park City.  Of course, this was all complicated by the local switching and extra trains scattered throughout the layout by the dispatcher to keep things interesting, but being a scheduled train meant I didn't need to worry about much more than one flagman who had fallen asleep on the track.

Overall, it was a very fun way to spend a Friday night.  It's going to be one impressive layout when it's completely done; I'd say it'll be able to easily accommodate a good 25 operators simultaneously.  If you have any further questions about the layout itself, I'd venture Phil probably wouldn't mind if you contacted him at Gulley [at] pasco [dot] com.