A Cheap Source of LEDs and Solar Cells 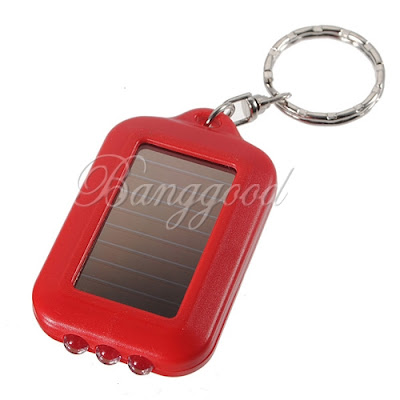 I was recently shopping around on eBay for some li-ion batteries and solar cells for a project. Unfortunately, I was generally pretty dissatisfied with the prices for small coil lithium cells.  I then found an eBay seller selling  solar rechargeable key chain lights for $0.99.  I figured, since it's driving white LEDs, but less than $1, there's no way they have a boost converter in there, and Li-ion is the only common battery chemistry with a high enough voltage to drive white LEDs.  Therefore, there is most lightly a Li-ion cell in there, and three white LEDs and a small 5V solar panel are a nice bonus. 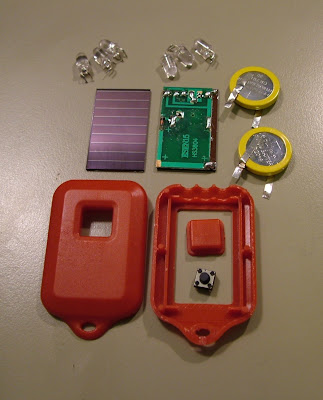 I ordered two as part of a larger order from him, and tore them apart. Tearing it apart, it seems I was mostly right...  The circuit is about as simple as it gets; a 5V 1mA solar cell, trickle charging a lithium coin cell through a diode, and then a push button to three white LEDs. There isn't even any current limiting here; it's depending on the high internal resistance of such a small battery.

Unfortunately, instead of it being a single rechargeable 2032 battery like I theorized, it ended up being two 2016 3V lithium cells heat-shrinked together. Once the initial 6V charge on these (not technically rechargeable) batteries dies, these things are probably pretty pitiful after being recharged by a 5V source...

On the bright side, three white LEDs and a 5V 1mA solar panel is a nice consolation prize for a failed attempt at out-smarting cheap electronics from China.  The solar panel is double-stick taped to the PCB, and you want to leave it stuck there for safety, and desolder everything else instead. Since it is a raw solar cell, the glass and terminals are entirely unprotected, so breaking the cell or lifting a pad is hard to avoid when you're handling it.  Leaving it on the PCB gives you hardier pads to solder to, and the surface mount diode is generally useful for solar projects.