Just in case any of you have been getting worried, I am in fact still alive. School this quarter did nothing short of kick my ass. My amateur radio club duties consumed literally every weekend of this quarter, and teaching (and more so grading) a lab section in the EE department was a stimulating experience that didn't yield much blog post fodder. 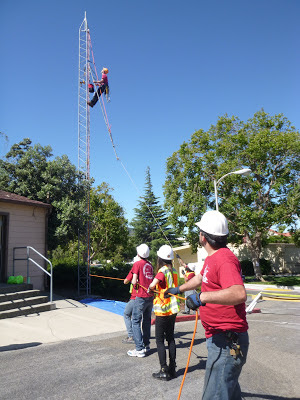 Once finals week wrapped up last Friday, my buddy Marcel showed up and has been crashing on my couch (which is almost always open for any friends or hacker types who need a place in SLO) for the last week while we had another whirlwind work week.  The club turn-out was great, and we made great progress on building the club's infrastructure, maintaining what we already have built, and just generally having a good time playing with radios.

The first major project of the week was tearing down the old University Police Department's radio tower. UPD recently moved to a new facility, and CPARC volunteered to assist in the demolition of the old building.  This doubtless saved the university a few thousand dollars on their quote from the demolition company, and we get a lightly-used 40 foot Rohn 45 tower for club use. 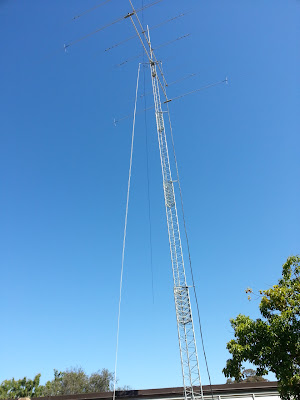 On day two, we turned our focus back to the club shack, and finally hanging the club's 80m dipole on our new tower. Due to the slightly different location of our new tower, and how inconvenient it is to deal with an 80m dipole on a telescoping tower, we spent quite a bit of club member engineering talent designing a clever auto-retraction system to allow us to raise or lower the tower as a one-man job. 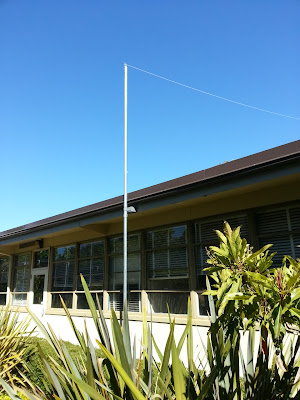 The problem is that when you lower a 72' tower, the ends of the dipole fall on the roof or people below it. This means you normally need two people at the ends to spool up the dipole, and the antenna becomes useless when the tower is down (This is bad since 80m NVIS is an important capability for our shack in storm conditions, since we are an Emergency Communications Center for SLO county). To overcome this issue, we came up with a very clever and clean counter-weight design based on railroad catenary systems, where you have a pulley and weight at the end of a line to keep constant tension under varying lengths.

After working out the trigonometry, we figured the end of the dipole needed to move 15 feet as the tower went from fully retracted to fully extended. We then purchased two 20 foot pieces of 3" conduit, mounted a pulley on the end, and used 3' heavy-duty tent stakes as the weights. The weights are inside the conduit, and move from hanging two feet from the bottom of the conduit up to just below the pulley as the tower is extended. A very clean solution that works great and looks much simpler than it actually is. We were particularly impressed that once it was all built, our math for how long the lines and weights needed to be were off by less than six inches on both sides.

This was the biggest job of the week, so thanks again to everyone who helped out, and a huge thanks to our EE department head, Dr. Derickson, for allowing us to erect even more masts and towers on the EE building. 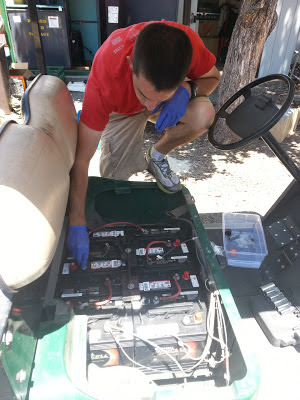 The rest of the week was spent working on countless projects big and small around the shack and EE department. Since the amateur radio club maintains quite a bit of expertise in battery management (due to our ECC battery bank and general mobile battery ops), we are the department's de-facto golf cart care-takers. We are happy to do this, since we are by far the biggest users of the department's cart for moving our equipment between buildings on campus.  The cart's last battery pack had finally given up the ghost this quarter, so we generated for the department an $800 quote for the new pack of batteries we would need to return the cart to service. The department gladly fulfilled this for us, and we enjoyed spending a day on a fun battery project. 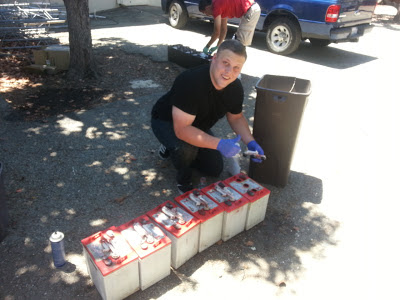 After replacing the pack, we identified the bad battery in the old pack, and cleaned up the rest of them for possible future application replacing the club's currently non-operational battery backup (a very old flooded NiCad pack from a hospital operating room). 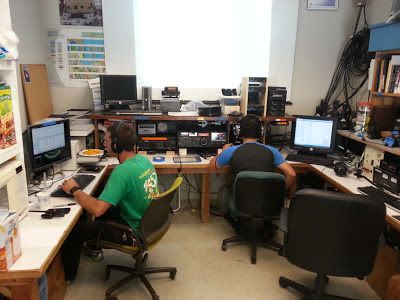 After a long week of being on campus from 8am until well past dinner, we were looking forward to finishing off the week participating in the ARRL Field Day contest. We decided to activate our shack using the club vanity call N6CP as an emergency operations center with two active operating stations (meaning we were class 2F). I sent out a lot of the pre-weekend emails to drum up enough operators to keep us active most of the 24 hours (we were down for only 6.5hrs throughout the weekend), and helped Marcel with much of the final testing before the contest kicked off at 11am Saturday. 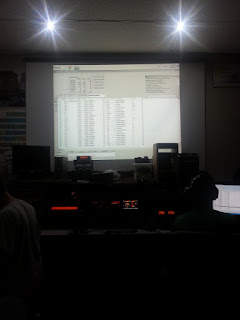 My contribution that I'm most proud of was setting up WriteLog on all the shack computers so that we had tab auto-completion throughout the contest, and live log updates on the shack projector for everyone else to watch without shoulder-surfing the two operators.

Thanks to all the club members and alumni who showed up and helped us have such a good time. Our rough contact count rounded out at 871, which we were really happy with. Here is our soapbox submission for the event:
The Cal Poly Amateur Radio Club W6BHZ/N6CP operated ARRL Field Day from the club shack as a 2F EOC taking advantage of the brand new 72ft antenna tower with a TH-7DX Tribander, XM-240 40m beam, and 80m inverted-V. Almost a dozen students and alumni activated the shack in the most active contest the club has seen in several years. Many brand new hams got to try out HF contesting and everyone did a wonderful job handling the pileups on both voice and digital modes. As a 2F station, we had the Yaesu FTDX-9000D and the FT-920 operating concurrently into the early hours of the morning. With only a four hour break at 5am, the station was on the air for a record 19 hours. Be sure to look for the Cal Poly station in upcoming contests and for Field Day 2014!