My First Adventure in Homebrewing Beer 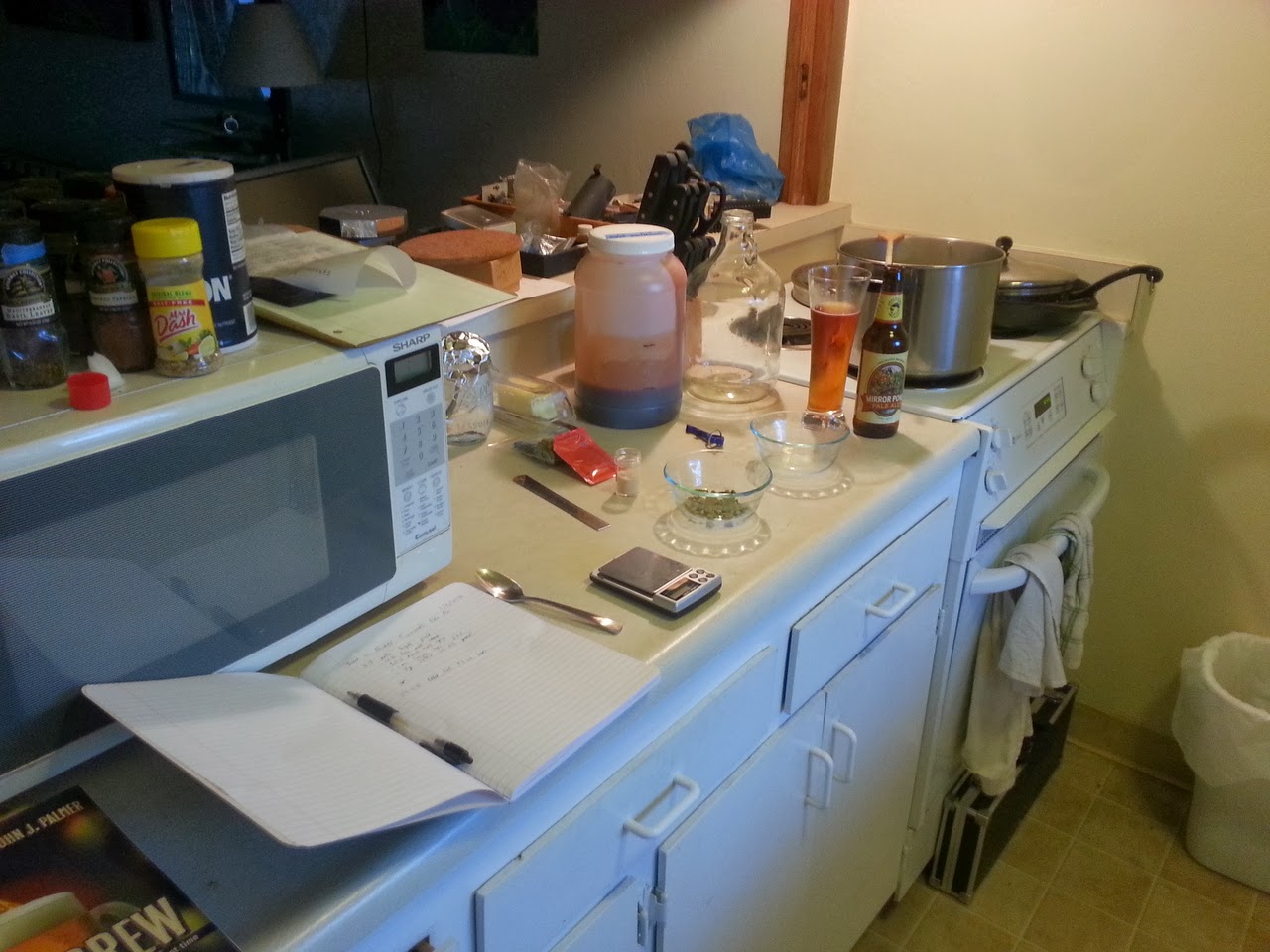 Yes, I am in fact alive. Last quarter ended up being more work than I had expected, and teaching a section of Electronics Lab for Non-Majors sapped away a lot of the instructional energy that I normally blow off on this blog.

Every year, I try and find a new hobby to broaden my life experience with. 2012, it was getting back into Amateur Radio; 2013, it was shooting (mostly trap, though I'm slowly getting into rifle...); 2014, I'm thinking it's going to be homebrewing beer.

I've been toying with fermentation for a while. Most notably, last winter/spring I had a few false starts that ended with me throwing up in my bathroom and my friends laughing their asses off. After that, two experiences really convinced me to go all in and re-approach the hobby more rigorously this year.


So, when Robbie and I manage to brew a better beer with four year old malt and yeast than someone seriously sold us in a liquor store, it's hard not to figure that this is a hobby I can't be too unsuccessful at. Queue a trip to the local homebrew shop here in San Luis Obispo (Doc's Cellar), where I buy a copy of Palmer's How to Brew. It's a very nicely laid out book:
Thanks to my apartment kitchen already doubling as a wet lab for various projects (PCB etching, etc.), I can already cobble together most of what I needed to brew my first batch. What little I still needed (mainly a hydrometer and bottle capper), I put on my Christmas list for my parents, who always appreciate when I ask for more tactile things than a textbook about knots for holidays.

Being the engineer that I am, the first thing to do is run a small batch of the most generic beer recipe I can come up with as a baseline to compare against. This is based on Palmer's Cincinnati Pale Ale recipe, with substitutions based on availability at Doc's Cellar and only doing a half batch at a time (2.5 gallons). 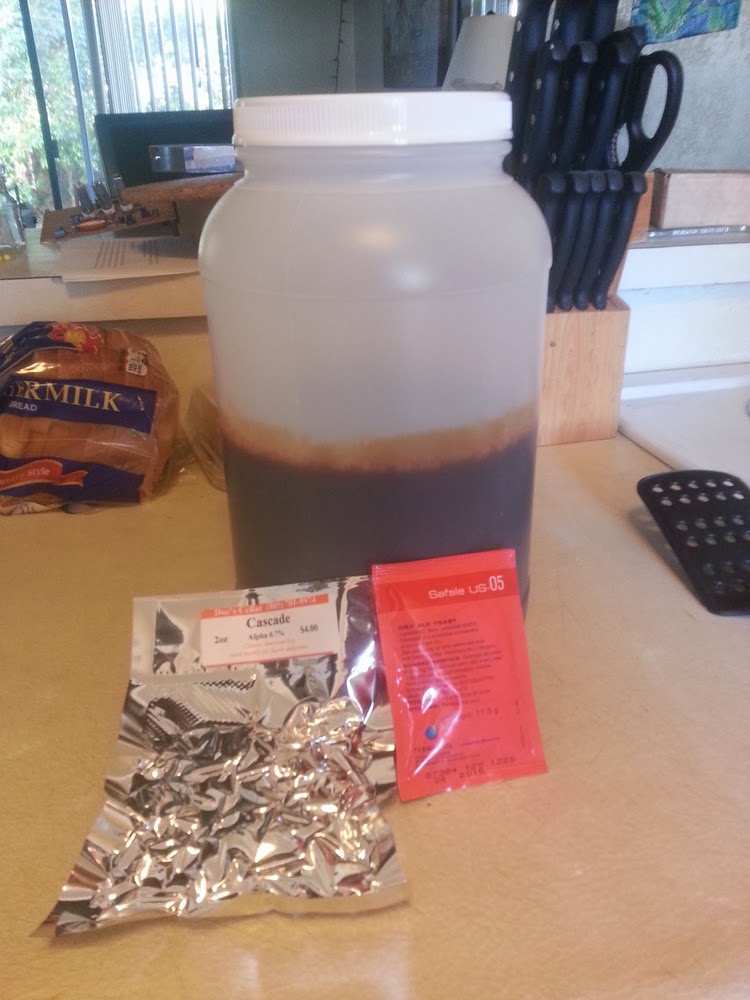 Putting the expense of consumables for the first batch at $10.51, not counting the ~$100 of equipment I've collected/bought/been gifted over the last six months. 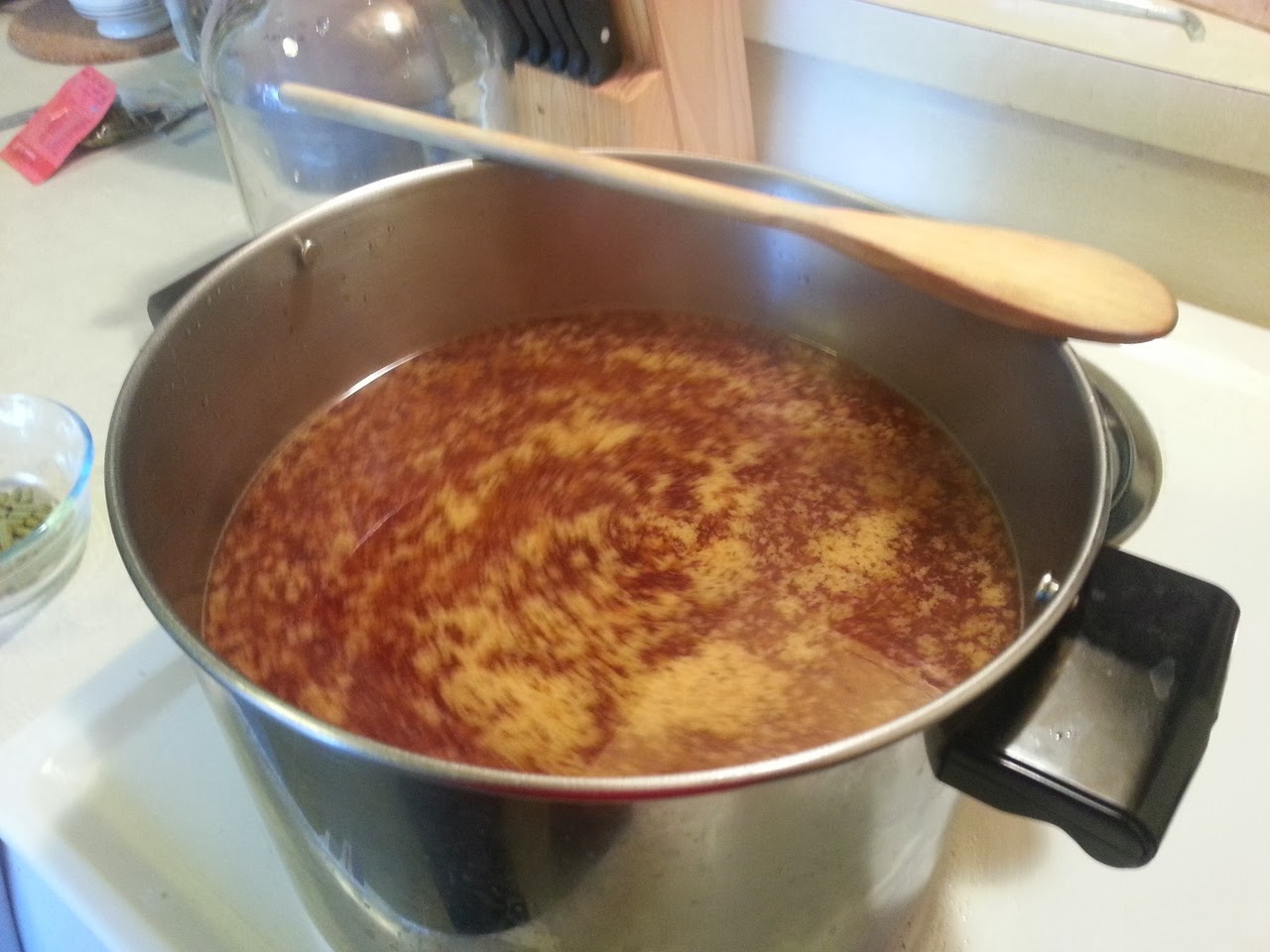 First thing is to boil the malt and hops. This pasteurizes the wort so that the only thing growing in it ends up being the yeast we want, changes the chemical composition of the malt, and steeps the hops. I did a partial boil with 1 gallon of water, which I then diluted to 2.5 gallons in the final fermentation chamber, which isn't ideal for steeping the hops, but the best my largest pot allows. 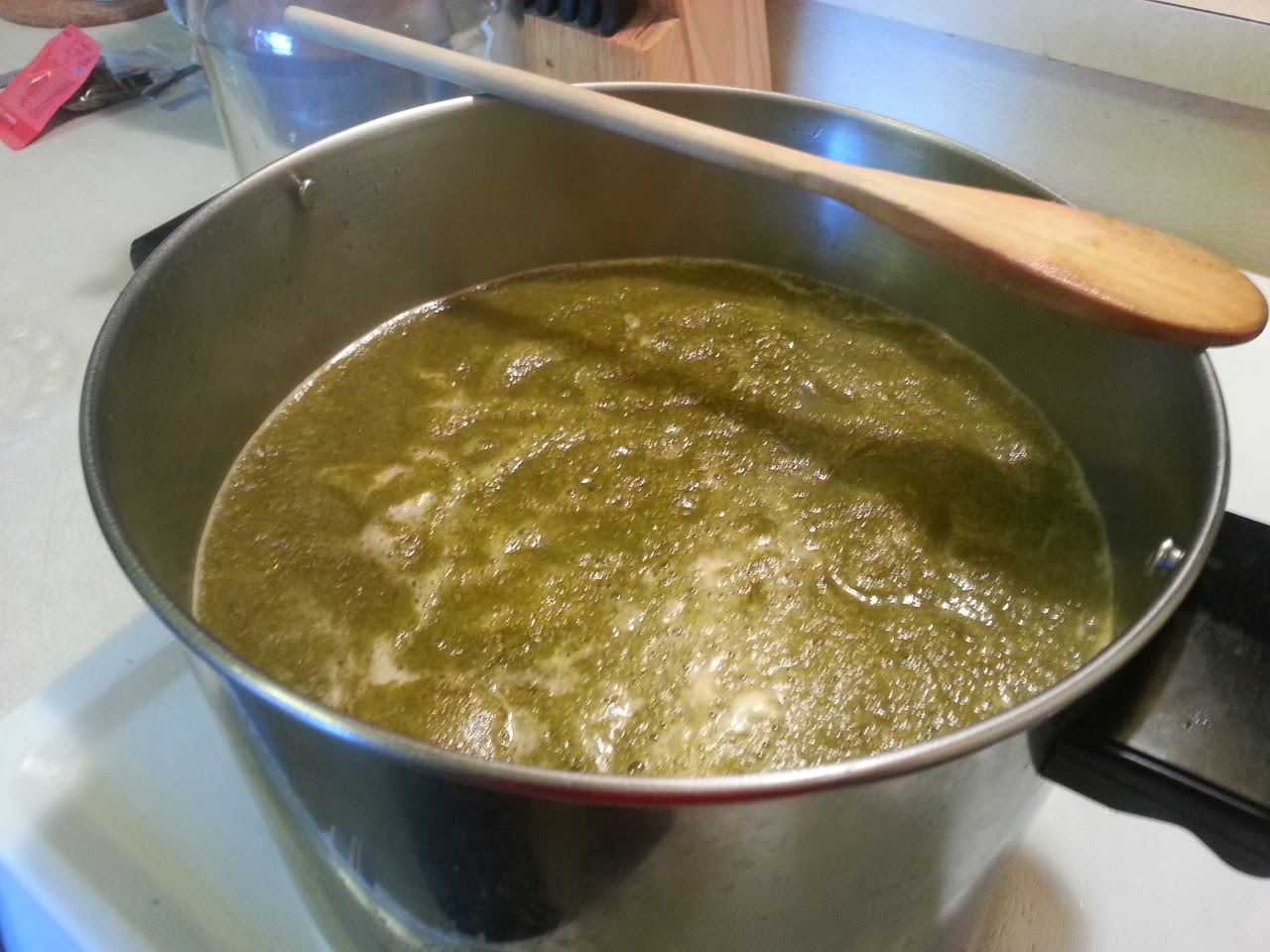 By adding half of the Cascade hops at the beginning of the boil, and holding the second half until the last ten minutes, I get to reduce half of it to just the bittering agents, while still retaining some of the aroma and more volatile flavoring from the second half. 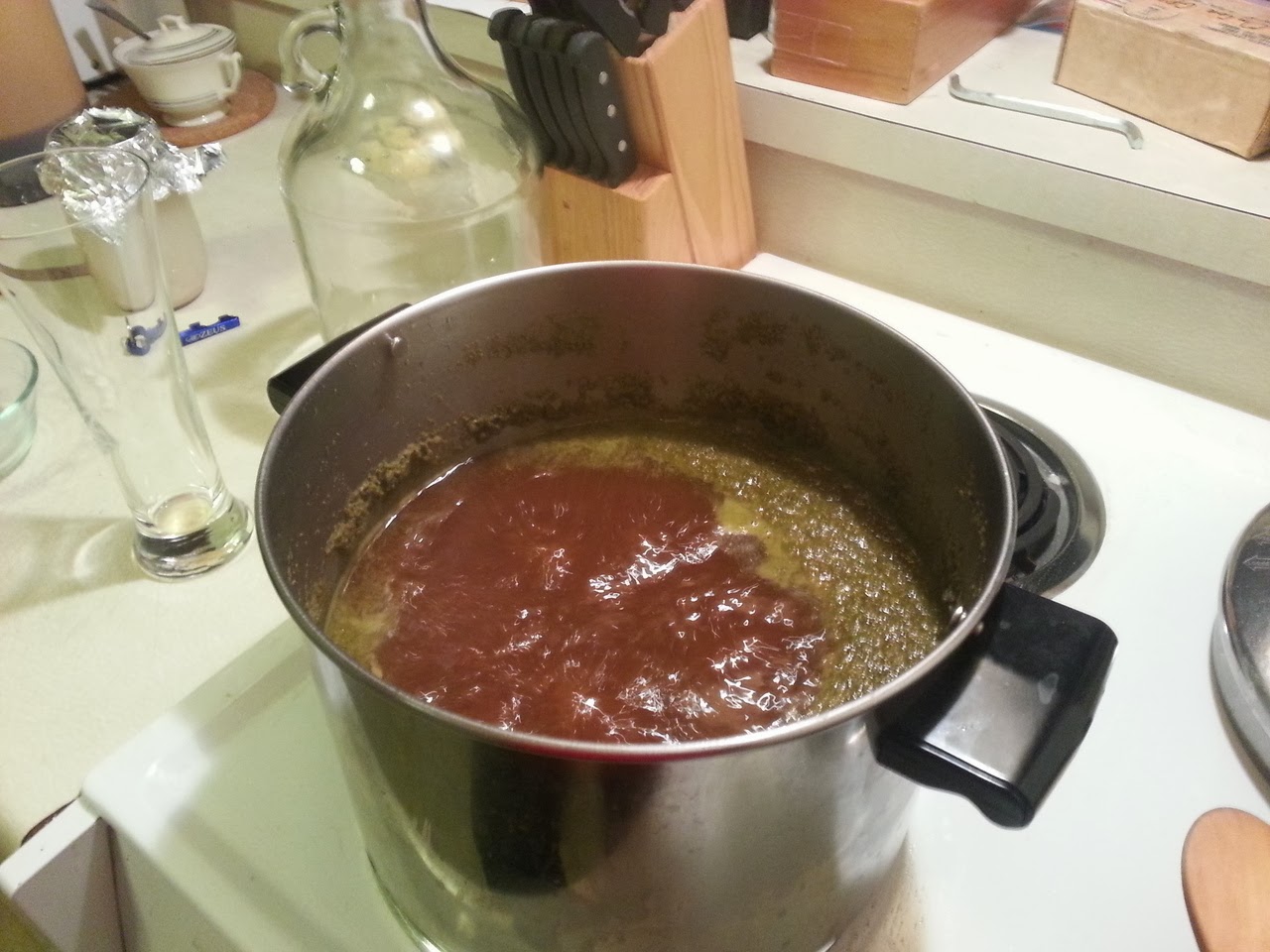 Picture well into the boil. I didn't bother tracking boil-off water loss, so I'm likely going to end up with about 2 gallons of beer in the end, once you factor in water loss here and in the bottom sediment when I bottle in a few weeks. 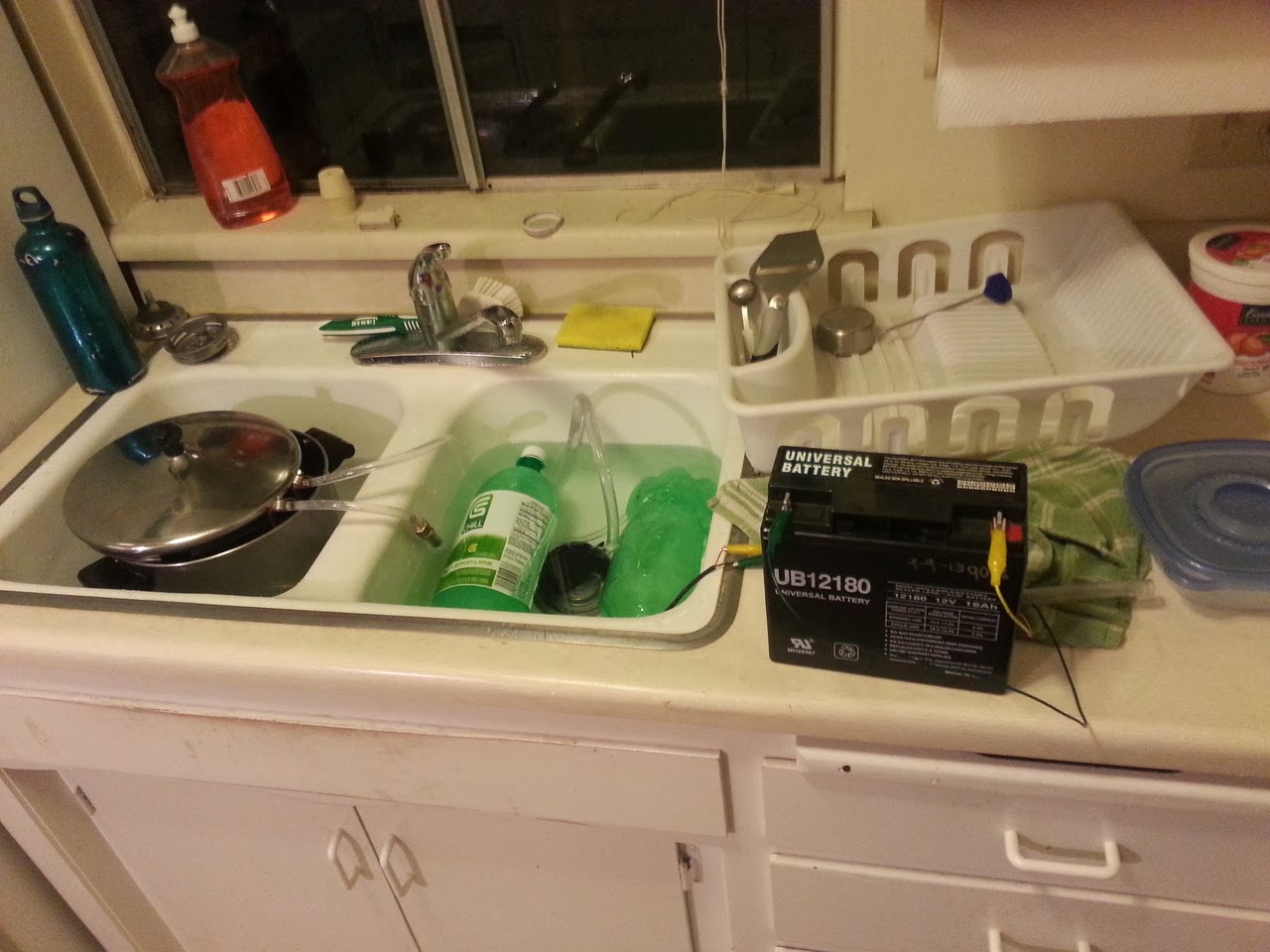 The hour of boiling the wort breaks down lots of complex proteins that you want to settle out of the beer. Once that happens (which makes it look a lot like egg drop soup), you want to cold shock the wort to pull out more proteins, which mainly cause a hazy appearance when you chill the beer, but also do affect the long-term stability of the beer (which is unlikely to be a problem around college students...) 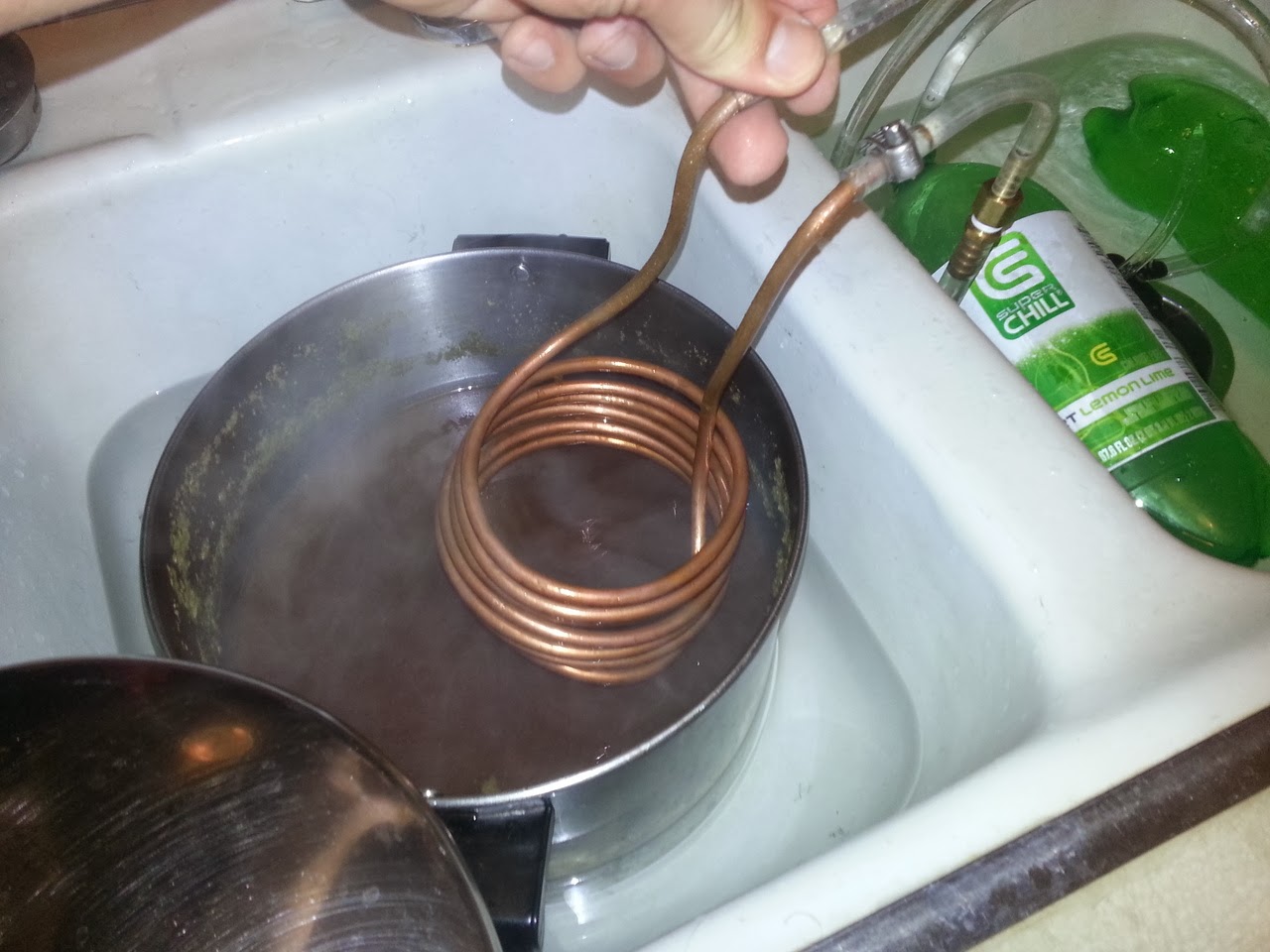 The pot is placed in one sink filled with cold water, while ice water is circulated through the copper tubing coil I fashioned from left-over copper tubing from a boiler experiment I did in the past. 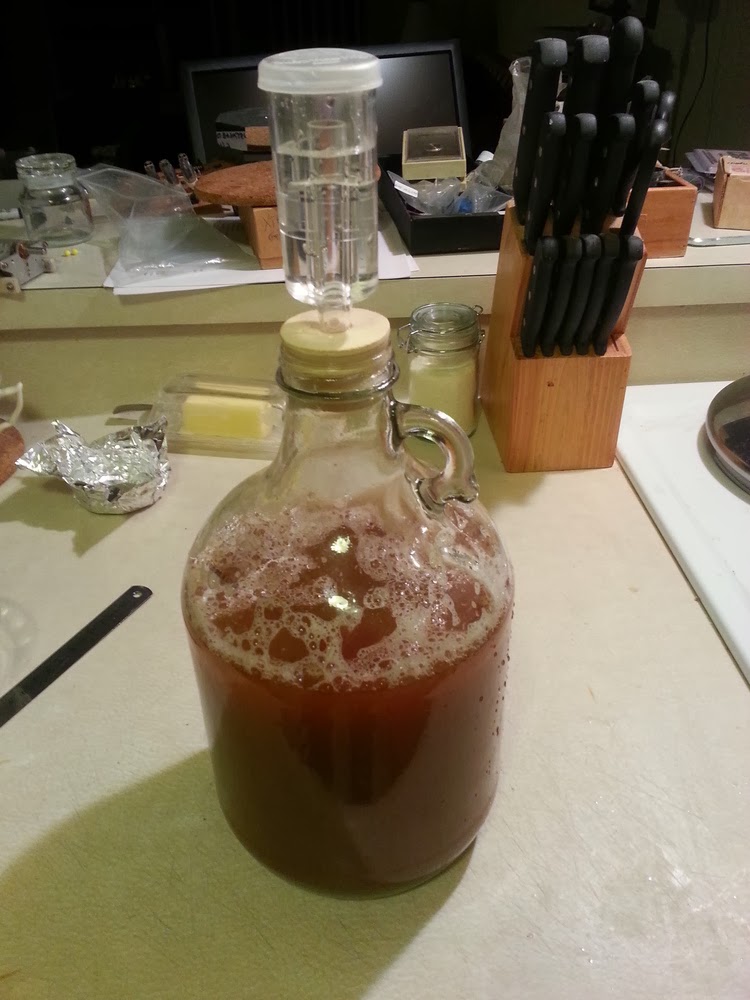 Once the wort is cooled down to below 70°F, I dilute it to 2.5 gallons, pitch 7g of rehydrated yeast, and split the wort between a 3 quart carboy and a 5 gallon bucket so I can visually track a small sample of the batch.

The initial specific gravity of the batch ended up being 1.047, using only the malt syrup and no added sugar. This, minus the final gravity in a few weeks, can tell us how much alcohol my little yeasty buddies here created, which isn't going to be anything to phone home about. Then again, if I were doing this just to try and get drunk, I'd save the trouble and just drink more rum from my liquor closet... 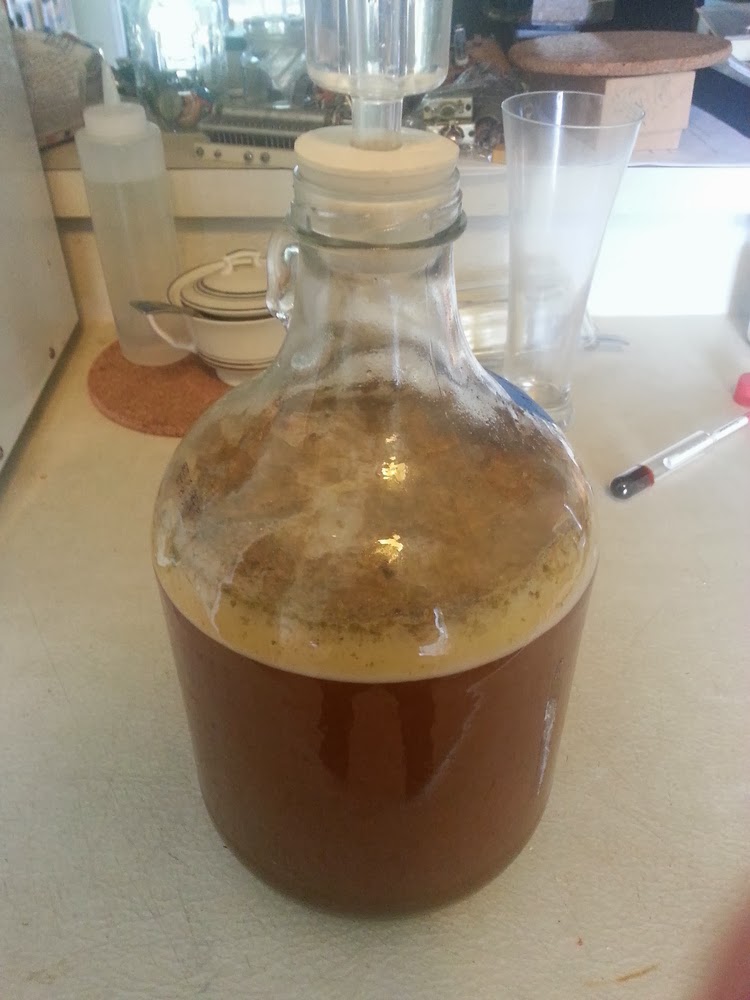 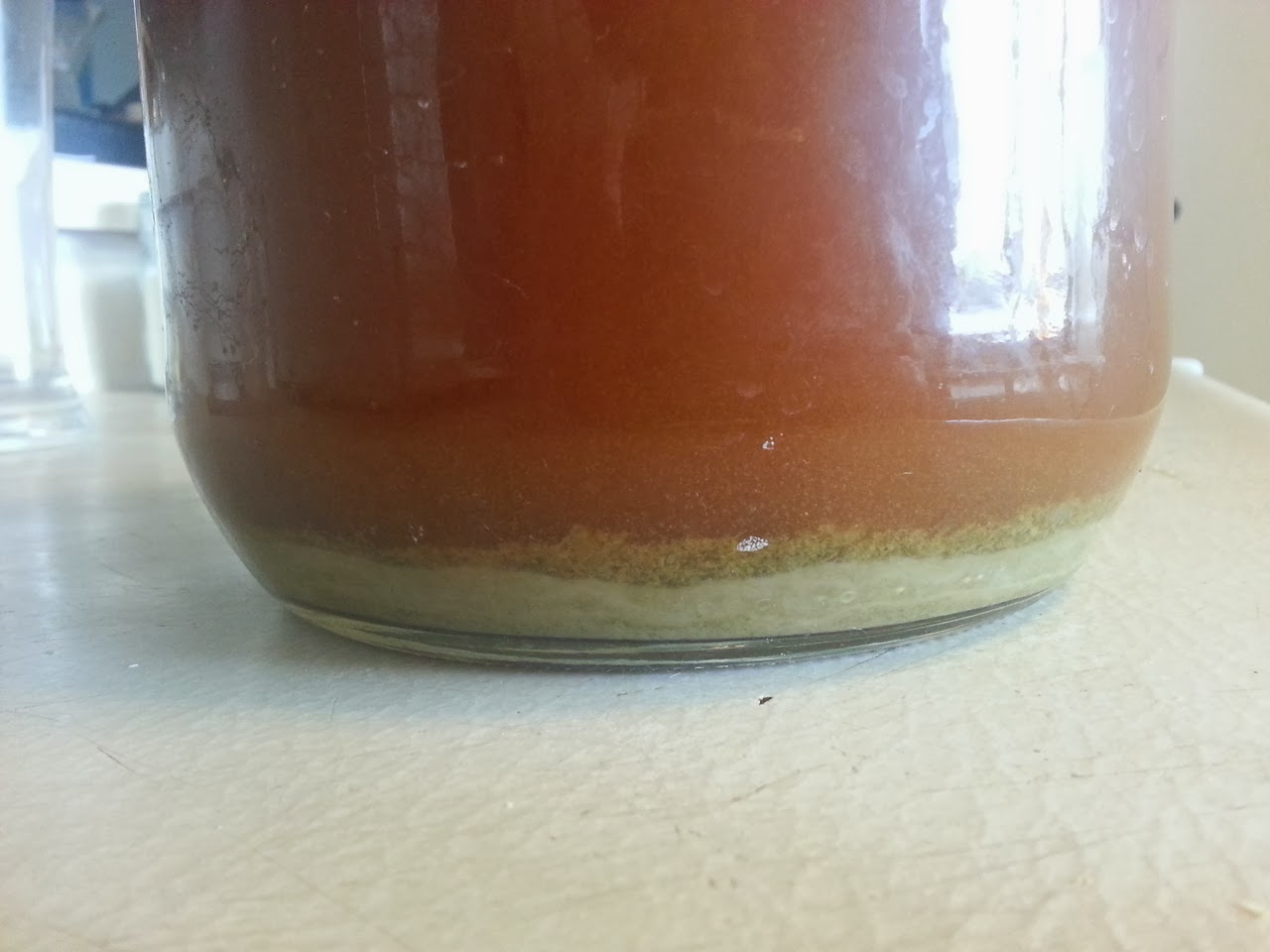 The first definite signs of life took about 16 hours. These last two pictures were taken 41 hours after pitching the yeast. Lots of churning going on in the wort, the airlock is bubbling every ~12 seconds, and all that nasty looking foam on the top is slowly growing (that is totally normal).

Now I need to wait three weeks, bottle this batch with a small addition of sugar for carbonation, and let it bottle condition for another few weeks. Come about mid-February, I'll get to test this first batch. Until then, I just need to leave it alone and figure out how I want to specialize in this hobby.