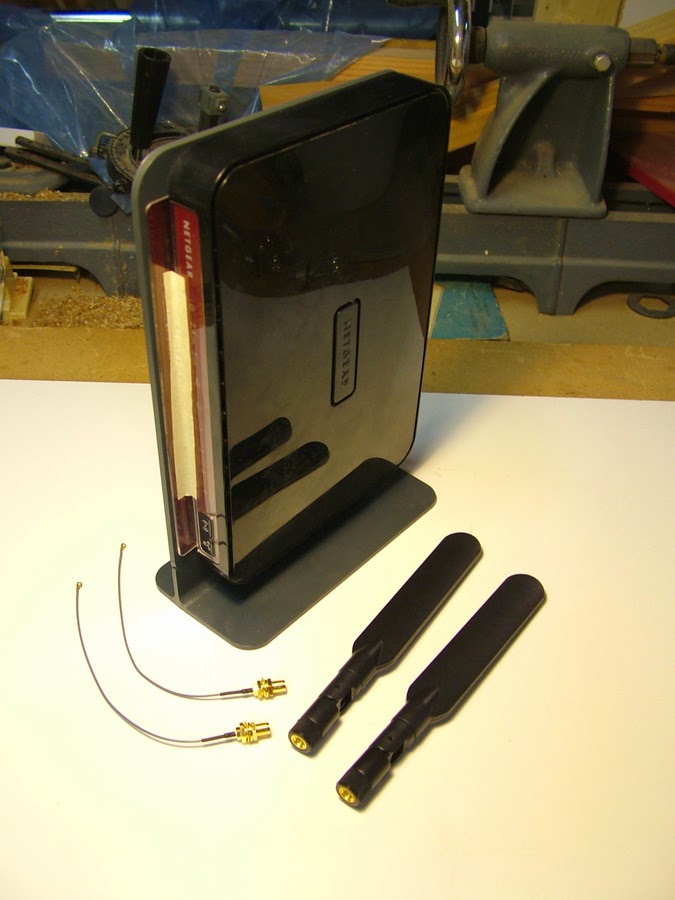 As I mentioned before, my previous primary router was a Netgear WNDR3800. A good piece of WiFi kit that I've simply outgrown as my main router, it now gets to serve as my network's main access point.
Unfortunately, I've always been a little disappointed with it's range as an access point. Throughput inside the apartment is great, but 10' beyond the front door you're toast. Part of this is because of the anemic 50mW it puts out on 5GHz, but I like to blame the fact that it uses tiny internal antennas more than anything else.  I can understand the appeal of the "slick" look from internal antennas, but I've never been one to go for popular aesthetic, so I figured I'd finally fix that.

This is a popular mod for the 3800. All you need is a pair of u.fl to RP-SMA pigtails and two dual-band RP-SMA WiFi antennas, both of which you can get on eBay for a total cost around $10. I've even seen some pre-packaged "WNDR3700/3800 external antenna mod" kits for sale. 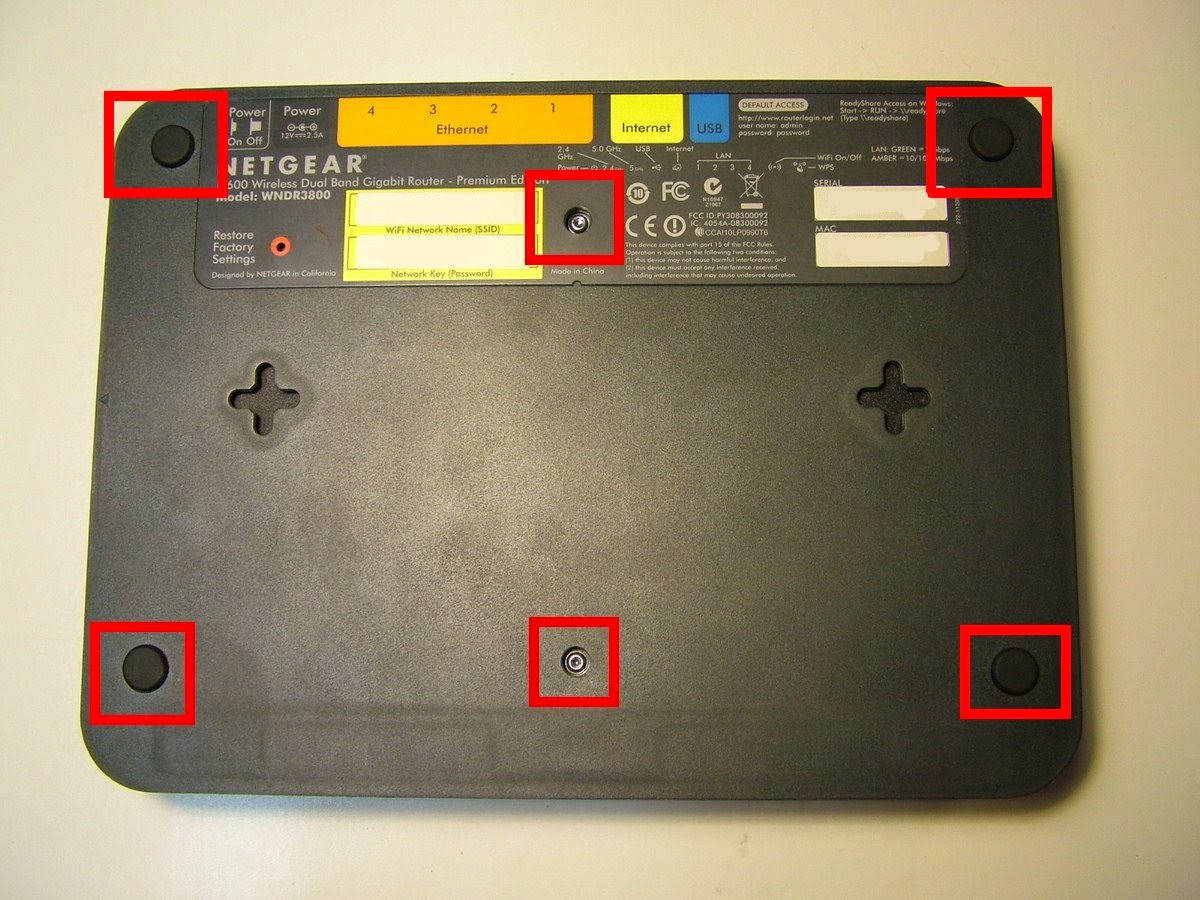 Getting into the 3800 isn't quite as easy as the classic WRT54GL, but all you need is a T9 torx driver for six screws, and the four rubber feet are actually snap-in, not adhesive, so they go back in quite nicely. 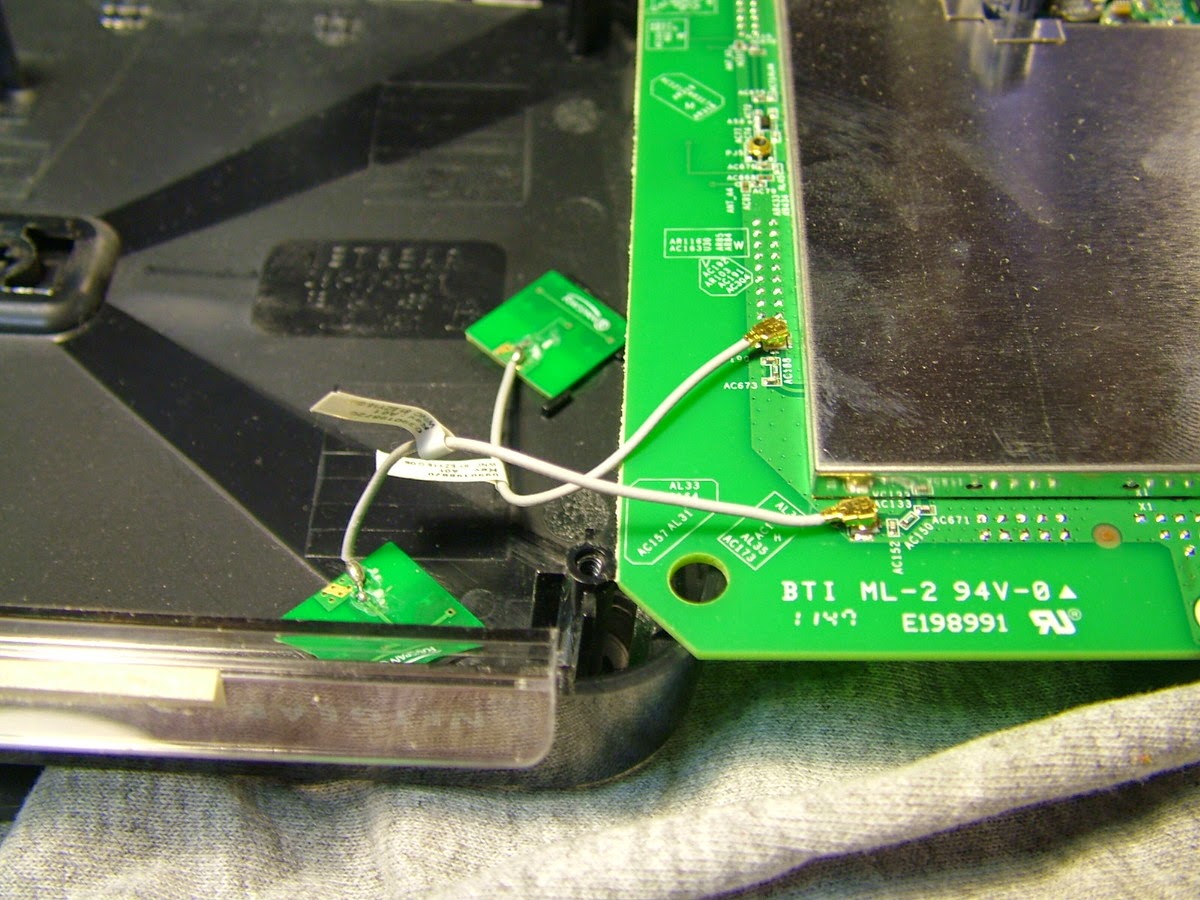 The stock antennas are crazy small. 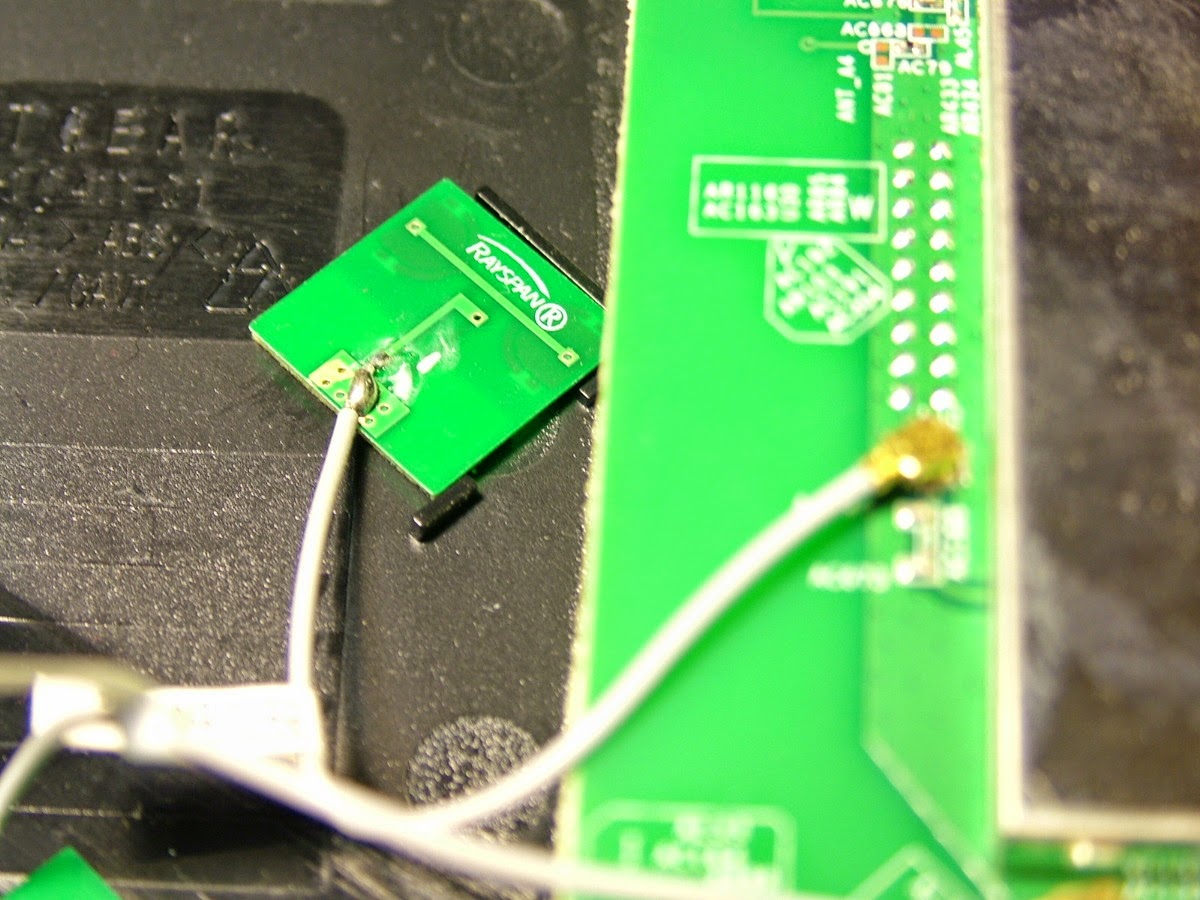 Seriously. They are tiny. They are foam taped to the inside of the case, so they're real easy, if a little destructive, to peel off. 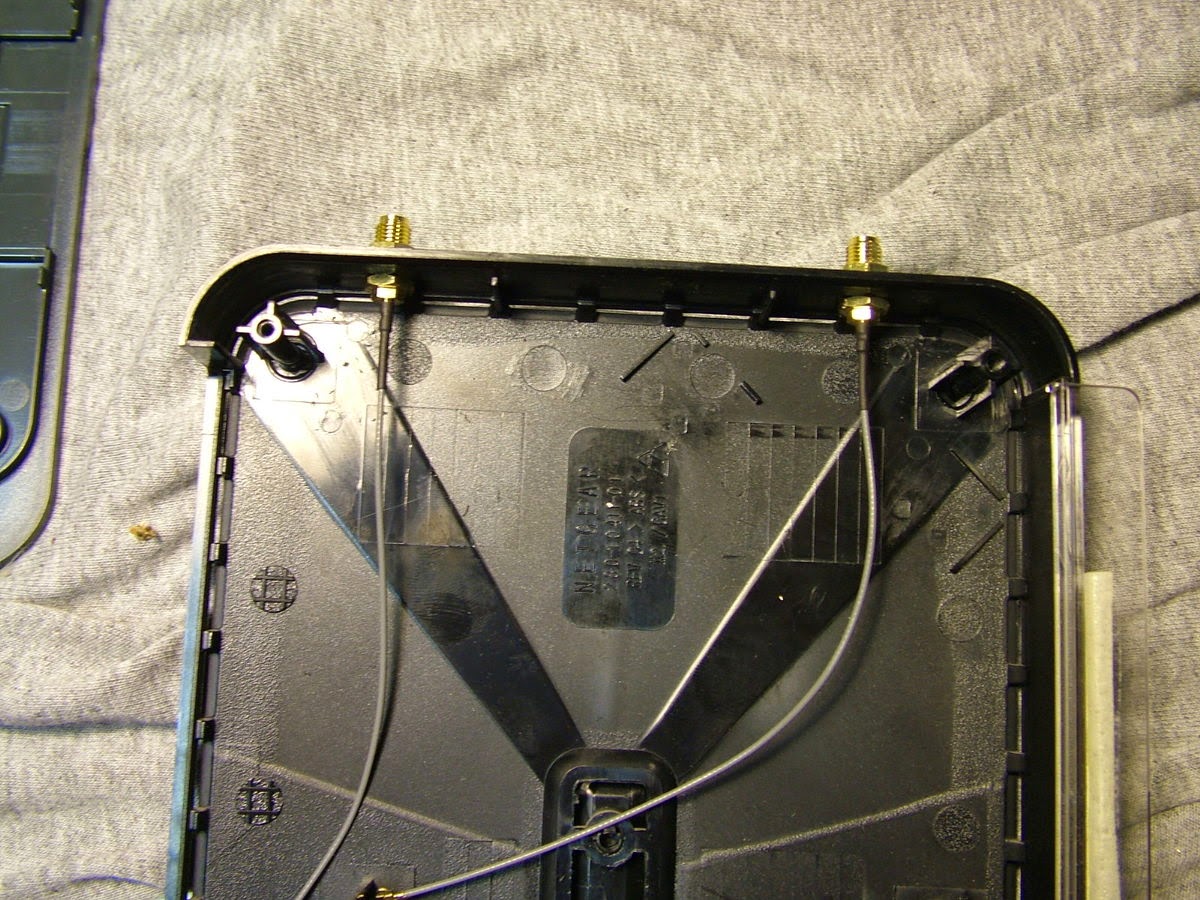 I then drilled two 1/4" holes in the top of the case, centered in the short way and 1.3" from the two sides in the long way. The plastic is surprisingly soft and not brittle, which was a relief since I was afraid of shattering the case while drilling.

If you don't mount the antennas perfectly symmetrically, you'll always suffer from them fundamentally lacking symmetry, which would drive me nuts. 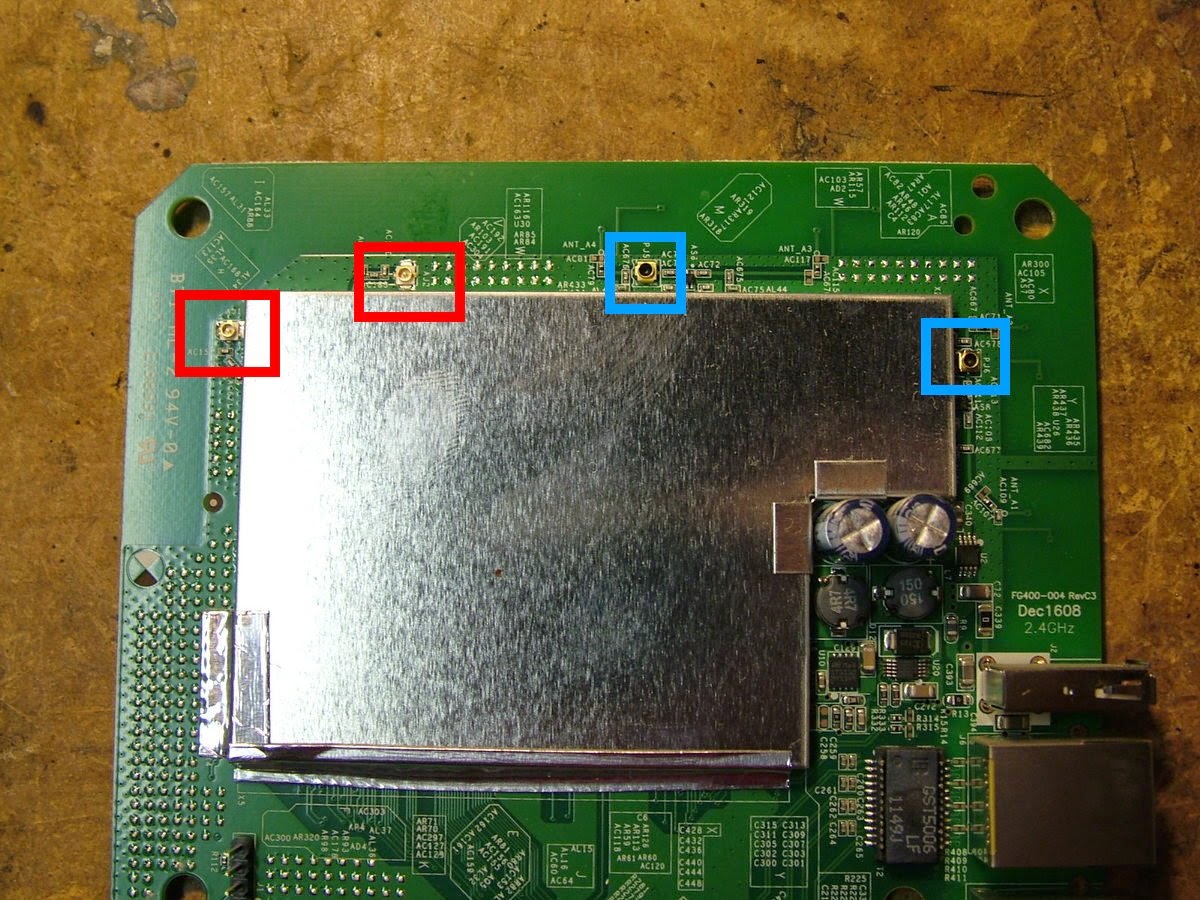 I had been under the impression that the 3800 had four internal antennas, and while there are four connectors on the board, it only uses two of them. The two red boxes are u.fl connectors as I expected, but the blue-boxed connectors left me a little befuddled. 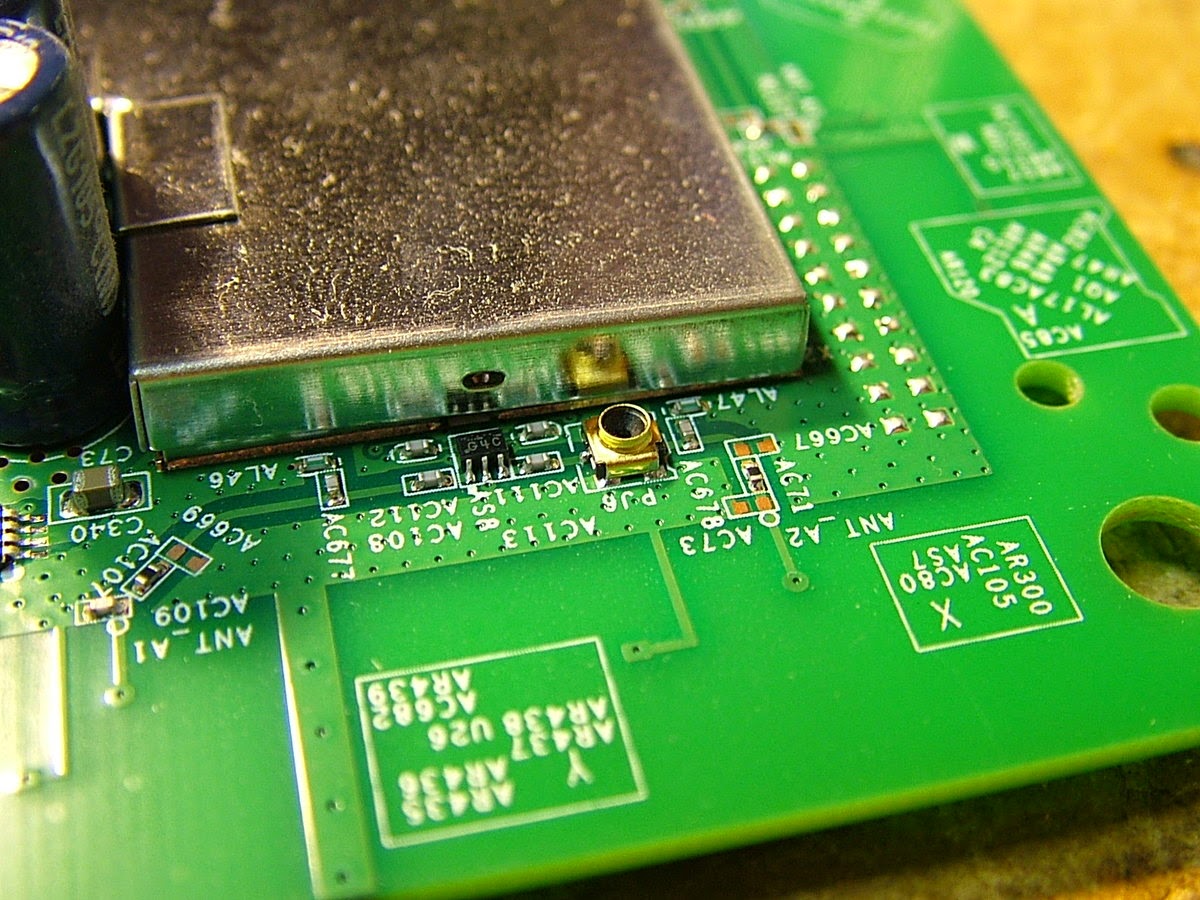 They sort of look like u.fl connectors without their center pin populated?  Anyone know what these are? 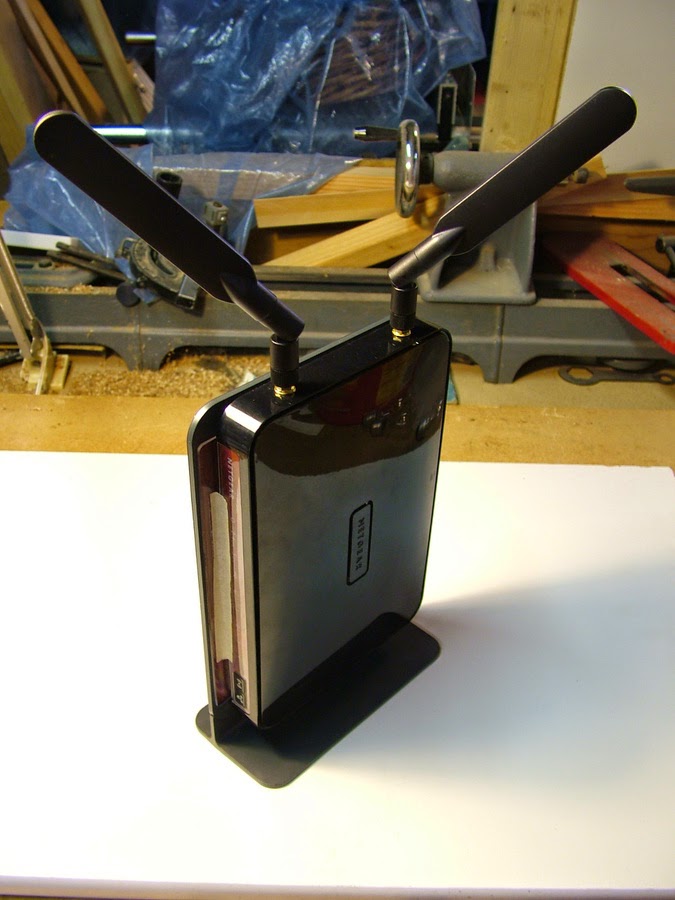 In the end, I've taken a sleek router and given it that solid industrial two-giant-antennas-sticking-out-the-top look. What's not to like?

Quantitative measurements are... underwhelming. At a fixed distance, I saw no measurable change in RSSI from before to after... Qualitatively, it seems to have slightly longer range, but nowhere near what I expected.  The 15cm pigtails I got were a little long, so I might replace them with much shorter ones to reduce loss there, and I never put much faith in either $3 WiFi antennas I get from eBay or RSSI readings from devices. A little disappointing, but not a failure either. Now that I've moved out of San Luis Obispo, I need to figure out how to sweep these antennas now that I've lost access to Cal Poly's microwave lab...

Would I recommend performing this mod? Having failed to disprove the null hypothesis, I can't really say. If you have the parts sitting around, go for it, but it may not be worth going out and buying new parts for. Has anyone seen improvements from this kind of mod before?