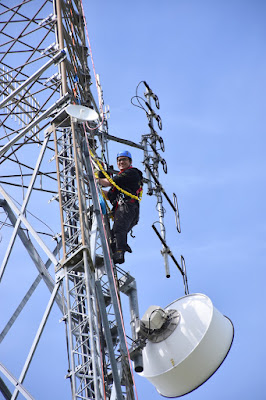 This Saturday was a nice change of pace; I got to climb a 180' radio tower.

Starting several months ago, my buddy Marcel and I decided to get serious about our amateur tower climbing and started putting out feelers for anyone in the bay area/northern California looking for volunteer tower climbers. This got us in touch with the WB6ECE repeater group and the Salinas Valley Repeater Group, which are both extensive repeater networks which inevitably have some tower work in their queues which we can get in on.

I had actually encountered the architect of the WB6ECE network before (Matthew Kaufman), when he gave a talk on simulcast repeaters at Pacificon in 2014. He had a project where he needed to move one and add another antenna to the Mt Toro radio site, which is south of Salinas. 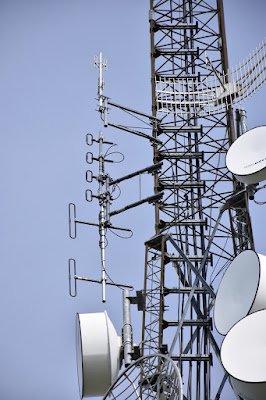 The subjects for the day are the two black folded dipole arrays on the left of this picture. The four bay UHF set was already on the tower, but needed to be moved up to make room for the VHF pair which we added right below it. We also needed to run new 7/8" hardline for both antennas.

The UHF antenna feeds one of the several WB6ECE 441.300+100.0Hz nodes, which are all on a single frequency and use simulcast magic to allow you to wander up and down the whole coverage area while using the same frequency. The new VHF antenna was to bring up the 147.270MHz repeater, which will eventually be linked into the Salinas Valley network (which I often monitor from the bay area via KE6STH). 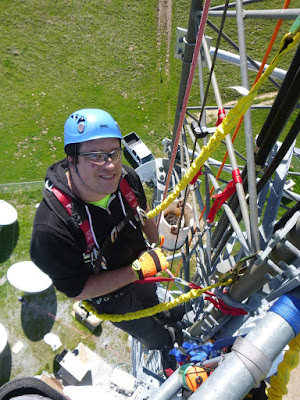 So the site details: The site is shared between MBARI and the department of education (for Santa Cruz county? Monterey county? I don't remember). The Monterey Bay Aquarium Research Institute had some really interesting radio systems on the site; particularly the two tracking microwave dishes (in the big white spheres) which point themselves at the MBARI research vessels out on the water so they can still have high speed Internet and HD video, etc.

The tower is 180 feet tall, and Matthew's mounting bracket was at the 110 foot mark. Moving one antenna, adding another, and hanging some coax may not sound like much, but that really is a full day's work on a tower like this. Marcel and I spent about five hours on the tower, and climbing 110' is tough enough that we opted to have our lunches delivered to us up on the tower. We were both rudely reminded that we don't do this on a regular basis, so hand cramping was a major concern (as was my ability to move at all on Sunday; my back is still complaining). 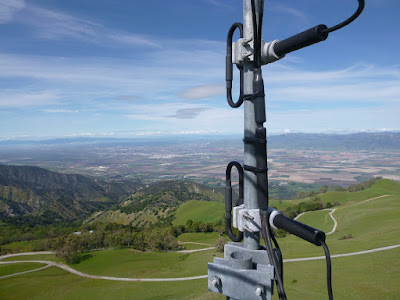 This was our view during lunch. This is why I'm willing to drive 1.5 hours to climb a tower for free. 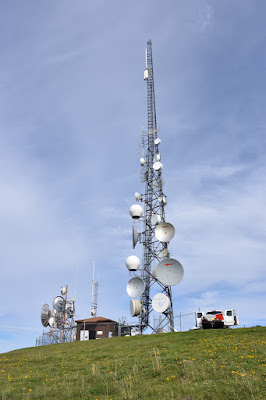 When you're a radio nerd, Saturdays don't get much better than this.

Do you live in the bay area/Northern California and have a tower in need of climbing? Are you interested in tagging along and working on the ground crew for one of these visits? Drop me a line and we can talk.