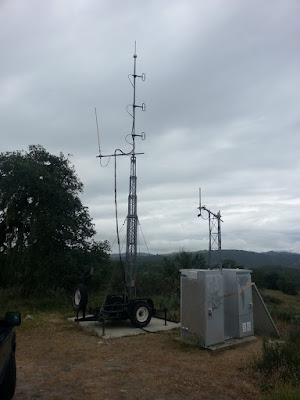 Since it's now April, most of my free time is being dedicated to preparing for the Wildflower Triathlon. Of course, I'm nowhere near crazy enough to actually attempt to run a triathlon; I'm on the communications team, so my triathlon experience involves more radios inside a dispatch center than running or swimming out on the course.

This weekend was the last of several big work weekends before the event, where we worked to get all of the communications systems and plans ready, as well as cleaning up the whole park in general. When we weren't out setting stuff up or cleaning, we were sitting in meetings going over the event timelines or crisis plans for if anything happens (rain, heat, major injuries, etc).

My weekend started a day early; I took Friday off from work so I could beat the rush out of the bay area, and managed to get to Lake San Antonio around 1PM. First thing I did was stop by our radio site and turn on one of our UHF commercial repeaters, which is solar powered before the event and used to coordinate the pre-event logistics. Once that was sorted, I pulled into the committee campground and was immediately put to work unloading food and supplies to keep the committee fed and happy all weekend while working around the park. The majority of committee (~70 people across all the functional groups this weekend) showed up around 6PM, at which point we had dinner, a couple hours of presentations, and a scavenger hunt to familiarize the new volunteers with all the important locations around the course. The day concluded with some well-earned drinking, and it's off to bed at 2:30AM.

My Saturday started at 6:00AM, by which point the hospitality team had already made breakfast available, so a quick bagel and Greek yogurt for breakfast before it's off to work. Rumor had it there was a "tree issue" down at Beach City where all the Cal Poly volunteers camp event weekend, so I drove down there and showed up to this: 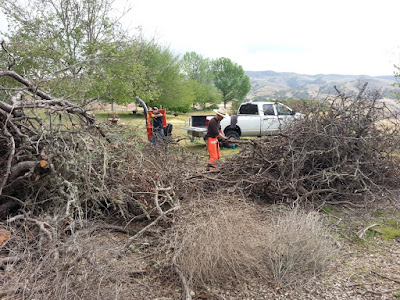 A tree had fallen over, and needed to be cut up into firewood/chipped before the event. Normally, the park rangers take care of issues like this, but since the San Antonio park was shuttered last year that work load has fallen on us to get the park ready for the event. A few hours of cutting wood, and it was time to go work on getting our dispatch center set up with the rest of the communications committee. 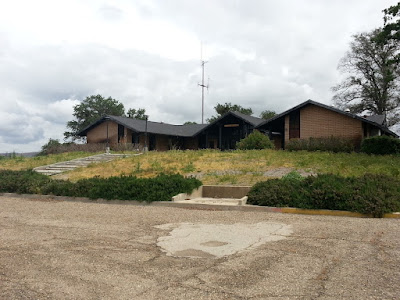 Normally, we run our dispatch center out of the park visitor center, but the building was recently condemned, so we've been getting creative with where we set up all of our radios. 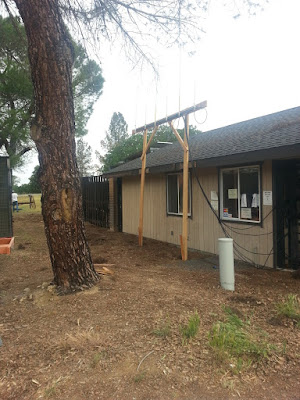 Thankfully, the next building over happened to have an office available, so the rest of the morning was spent setting antennas up on this wooden frame we built last year, running coax, and reorganizing the inside of the office to how we'll need it event weekend. It's hard to see, but the unistrut has three commercial UHF antennas, two VHF commercial antennas, and an amateur X-50 dual band antenna. As you can imagine, needing six antennas means it can sometimes get a little fast and heavy in dispatch. 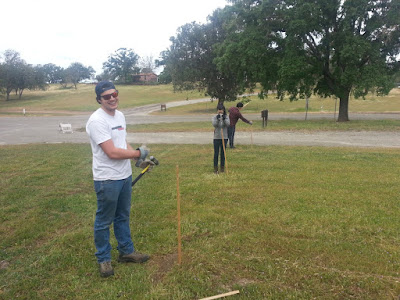 We also needed to set up a few lines of lathes for marking off the communications campground to afford our volunteers some separation from the event when we're off-duty. I left the communications committee with a pile of 50 lathes and a mallet, and later came back to discover their creative solutions on how to all pound lathes at the same time. Sticks and stones may drive our lathes, but something something something...

Having made it to lunch time, it was cold cuts for lunch, and then I reported to Race Command for a 90 minute meeting on planning EMS response event weekend. During the event, we're usually juggling several ambulances, a few fire response trucks, and a med-evac helicopter, so there's a lot of moving parts which we need to make sure all move in concert. 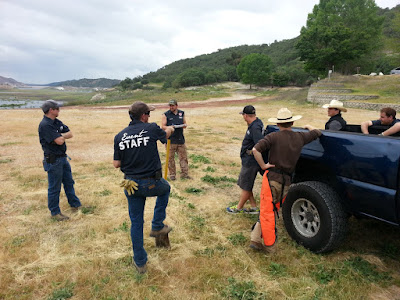 After the EMS meeting, it was back to Beach City to work on that fallen tree more, and have a meeting with the operations committee on how we were doing on the master to-do list. These are the great guys which you never see during the event, but who all make the entire event possible. 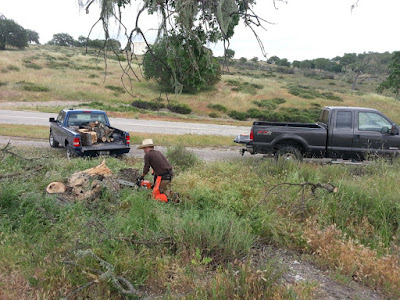 Chris and I caught the action item to go do more wood cleanup around the park. Various branches have fallen off trees, so we went out and Chris cut them up while I loaded them in my pickup to deliver to our firewood piles. My Ford Ranger may be the smallest truck of everyone on committee, but it pulls its weight.

After a few hours of branch cutting, it was time for dinner, and then more well-earned partying for the committee. Thankfully, I managed to get to bed sooner on Saturday: an opulent 1:30AM.

It's remarkable how well trained my body is after a few years of helping with this event; even after a day and a half of hard work and hard partying, Sunday I'm still up at 6:00AM sharp without an alarm.

Just as I'm sitting down to breakfast (again magnificently ready when I got up thanks to our wonderful hospitality volunteers), word comes in that one of the committee members is stranded a few miles outside the park where her car just died. A few of us load up in a truck and head out to see what we can do. We didn't manage to get the car re-started, so we hitched it to the truck and I got to steer the car back into the park while getting towed.

After grabbing a few bites of what was left of breakfast, it was back to dispatch to continue with some fit and finish there. Things were going smoothing, so Chris, Casey, and I loaded up to go attack another branch laying in the middle of one of the camp grounds. 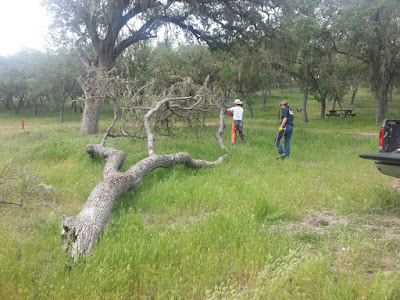 This branch had clearly fallen a few years ago and been simply dragged off the road. We had need for the firewood, so the challenge was to see if we could again fit such a large branch in my pickup. 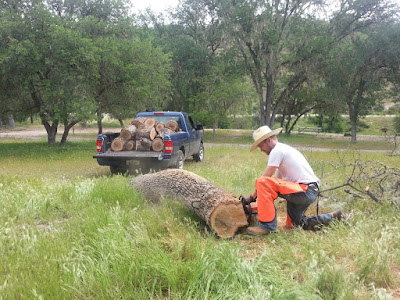 This was about when Chris looked over and saw a very young rattlesnake coming towards him in the grass. One point on the board to Casey for dealing with it. 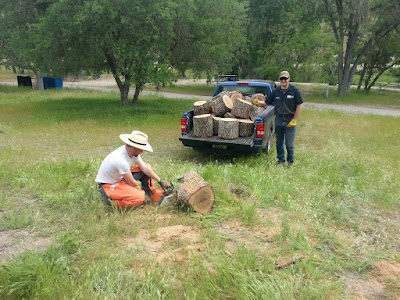 Success! And working on it didn't even run over into lunch. We may have gone a little past my truck's load limit, but thankfully I only needed to limp it back to our volunteer campground. After dropping the wood, it was back to the committee campground for lunch.

After lunch, we started cutting volunteers loose as they finished up their final prep for before event week. Most of my afternoon was spent discussing our policies for using the computer aided dispatch system that I spin up for the event, and lots of cleanup around the committee campground. By 4:00PM, pretty much everything was cleaned up, so I dug deep and braced myself for the three hour drive home and rolled out.

At this point, the next three weeks for me will be spent in the bay area configuring and testing radios to be ready to drop in event weekend, which for me starts the Tuesday night (April 26th). Most of the rest of the volunteers show up Friday (April 29th), and work through Sunday afternoon (May 1st).

If you're interested in volunteering on the communications committee, we're still looking for more signups until this Friday (April 15th). It's best if you have your amateur radio license, but even if you don't we can still put you to good use in places where an amateur license isn't required.