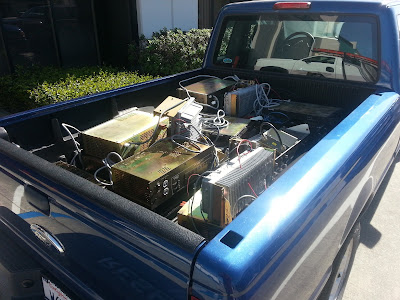 Last year, I got a good deal ($50) on a pallet of Mastr 3 repeaters. They were all T band (490MHz) and more or less clapped out, but I figured it would be a good learning experience (and I got a nice tear-down video out of it).  Being way off the amateur band and wrought with problems, most of the electronics have been of little use to me and has been little more than a learning opportunity, but one piece I see myself being able to use elsewhere is the final low-pass filters from the power amplifiers (Part number 19D902856G9). 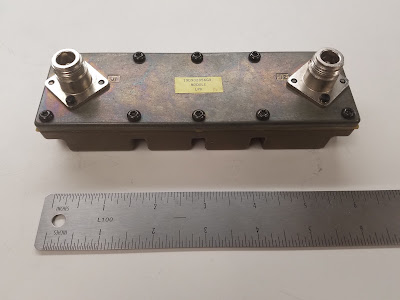 I've built low pass filters before, but wouldn't trust my own constructions to actually being put in use for where you need these filters the most on VHF/UHF, which is on repeater systems. Repeaters tend to be key-down for long periods of time, so power handling in the filters is important, and since they're remote if something goes wrong there's no one there to notice and getting to it to service it is generally inconvenient.  Since these low-pass filters off the Mastr 3s are already designed for high power (90W) continuous duty, they're perfect for my repeater applications (Usually 10W-25W) with the one exception that they're tuned for 470-512MHz, where all the repeaters I tend to build are in the 440-470MHz range.

That being said, 440-470 is lower than 470-512, so it's conceivable that the impedance in the pass-band might still be acceptable, and then the only downside is that I wouldn't enjoy quite as much filtering of the second harmonic than if the filter was really designed for 440-470MHz.

One thing I found interesting about the filter design was that it isn't symmetric! It's a 7th order LC filter, but the capacitors to ground only reduce in value on one side and not the other! My best guess as to why this is the case is that the engineers designing this filter knew that the output of the power amplifier wasn't perfectly 50ohms resistive, so they added a little reactance here to better match the amplifier.

To muddy the waters, the schematic and the physical unit I took apart don't agree on which port has the lower capacitance, and I wasn't careful enough when disassembling the amplifiers to say which port was actually connected where. I also enjoy that this model of the filter has black boxes instead of the inductance values filled in like on the other LPFs in the spec sheet; I'm not the only one fudging the documentation at times!

In any case, I just want to check the pass-band behavior of these in the lower 440-470MHz range, and see if these are something worth keeping or not. To the ungodly expensive vector network analyzer! 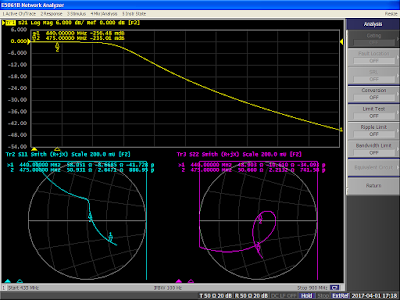 So on the top we've got the S21 plot going through the filter, so you can see the flat, low insertion loss, region on the left for the desired signals, and then the filter starts rolling off as you go higher in frequency, to the point where, on the right side of the plot, 900MHz is attenuated 45dB. The two markers 1 and 2 are at the two limits of my frequencies of interest, so you can see how the filter stays flat for much longer than I need before starting to roll off, so that 900MHz attenuation number could be better.

On the bottom, we see smith charts for the J1 and J2 ports (way zoomed in to see the detail around the center), so there's certainly an asymmetry to the filter, but both ports are decently close to 50 ohms so this isn't a game stopper. In an ideal world these filters would be a dot at the middle of the smith charts, which would be 50Ω + 0jΩ (50 ohms resistance plus zero ohms reactance), but they start wandering off into the wilderness as you go higher in frequency, which makes sense since the whole point of a low pass filter is that the insertion loss goes up with frequency, so the impedance usually does weird things (you can design flat impedance diplex filters if you care, but we really don't here) 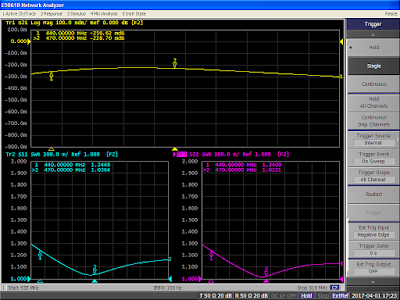 So now lets zoom into the pass band we're interested in and check the SWR to sanity check that this filter is an acceptable match for my transmitters at my lower frequencies. Annnnd they are! This filter actually happens to bottom out its SWR curve right at 470MHz, so this filter is going to be great for my part 90 stuff, and still find for amateur stuff with an SWR of <1 .20="" 90="" a="" amateurs="" for="" gear="" have="" lower="" nbsp="" of="" p="" part="" radio="" standard="" than="" thumb:="" ule="">
Notice that this check was pretty valid, since the SWR starts sliding upwards at lower frequencies. I probably should have done a sweep further down in frequency to demonstrate how bad it can get once you wander outside the band the filter was designed for, but these measurements were being taken on borrowed time on the company VNA.

Great. In any case, now lets take it apart! 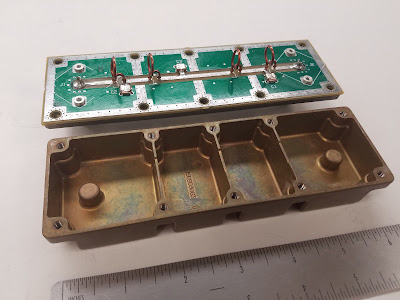 Ten screws reveal about what is expected, four inductors and three capacitors to ground. 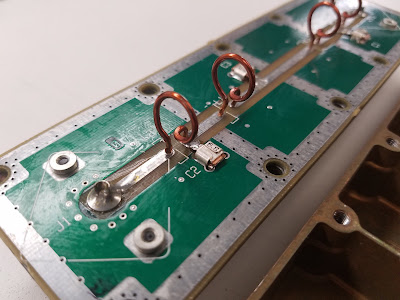 Of course, at UHF the needed inductance is about one turn, so these are pretty minimalist inductors! The capacitors are a little odd; I haven't seen these sorts of clad mica capacitor before, but they're designed to handle the high RF current seen in a filter like this without needing to be huge for the power dissipation from using a normal termination instead of these heavy wrap-around metal bits. The rated working voltage for these capacitors is just 100V, which was a bit surprising to me, but makes sense once you consider that this is a 50Ω 90W system. 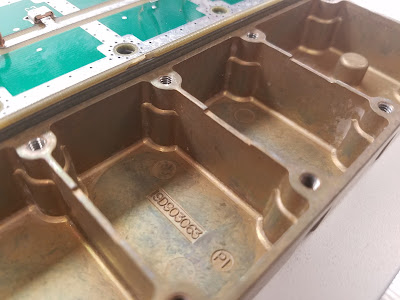 My favorite part of the die-cast shield is the little cutouts in the walls leaving a gap where the strip line passes underneath the dividers between stages. I don't know if those are designed for a critical dimension or just "tiny gaps."

In any case, I've now got a pile of these great LPFs for various repeater projects. They're usable as-is, but I can always go in there and tweak inductor/capacitor values if I want to use the chassis for something else (or actually tweak them down to my frequencies of interest).