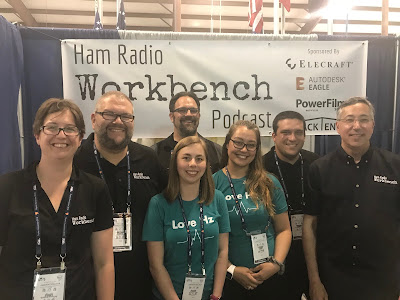 Hamvention is one of the largest amateur radio conferences in the world, and this year I finally decided to give it a try. It always falls on the same weekend as Maker Faire Bay Area, which I had always found more attractive than the idea of the largest ham con, so even I'm a little surprised that my Ham Radio Workbench Podcast buddies managed to convince me to come out and give it a shot.

In order to limit the number of days out on PTO (It's spring, so I've been taking a lot of personal time off for Wildflower Tri related activities), as well as save on travel / hotel expenses, I thought it would be a good idea to take a red-eye out to Dayton Wednesday evening to land there Thursday morning to help with set up Thursday.

1. The 10:30PM to 9AM red-eye leaves you in a very odd mental state, so maybe not the best flight plan for me.
2. I had been expecting a Maker Faire-like set up day, where everyone is setting up their booths and hanging out and having a good time, which really wasn't the case.

Most, but not even all of the vendors, were there setting up their booths, but as soon as each one finished set up, they generally just threw a tarp over their stuff and rolled out. Not quite the "the event without all the crowds" experience I was hoping to get being there a day early. 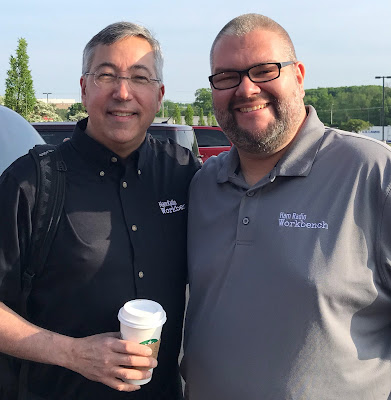 What was exciting was that this was the first time I got to actually meet Jeremy, KF7IJZ, in person. We've been friends for a long time, since I'm a "friend of the podcast" for the Ham Radio Workbench Podcast, but since he's out in Ohio we had not met yet. George happens to be local to me in the Silicon Valley, so we've met a few times.

The meet-up went just as well as I could have hoped. We were using DMR for the weekend, so when Jeremy heard me call him on the radio, he was at first a little confused since they hadn't gotten the Internet-connected hotspot gateway running in the booth yet, until a moment later when he finally realized that he was able to hear me because I was in actual simplex range. I, of course, forgot to take a selfie with the two of us capturing this historic moment in HRWB history, but we all survive. 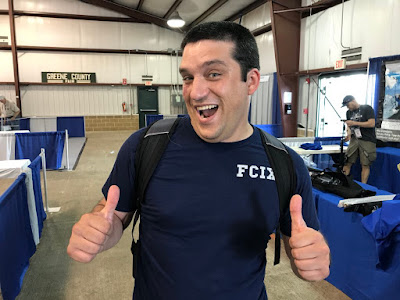 Set-up went as should be expected. Lots of people running around, lots of missing power drops, lots of not quite working Internet service, etc etc.

I started the day with Smitty, KR6ZY, checking out the flea market and generally walking around seeing the other vendors until the rain picked up, at which point we took shelter in our expo hall and I spent pretty much the rest of the day working in the Ham Radio Workbench booth talking to people about our podcast and what we're all about, as well as selling our bare PCB "kits", which I really like as a kit model: We sell you the board, and you're free to source all the other components yourself or click on the Digikey shopping cart link in our documentation to have them sell you all the parts, because Digikey is obviously much better at counting out resistors and LEDs into tiny bags than we are.

One of the exciting things for HRWB this year is that we've partnered with Digilent (including putting together an Analog Discovery 2 + accessories bundle specifically for HRWB listeners) and managed to convince them to come have a booth at Hamvention! We had a "visit both booths to get entered in a drawing" deal going with them, and it was all around great to have another group of people passionate about electronics education near-by. HRWB had Kaitlyn from Digilent on earlier this year on episode 41 to talk about the Analog Discovery 2.

After a full day of almost solid wall-to-wall people talking to us at the booth, we all went out to dinner with Digilent, and then headed back to the hotel to record the 50th (!) episode of this crazy Ham Radio Workbench podcast that was originally going to maybe run for six episodes if they were able to find enough to talk about. We are no longer concerned we'll find enough to talk about.

We all promptly went to our hotel rooms and passed out for the next day.

Saturday was about the same, but with what felt like fewer people and less chaos. I had already seen much of the convention, so I generally stayed in the booth for most of the day and continued to spread the good word of making and building your own projects. It was great. 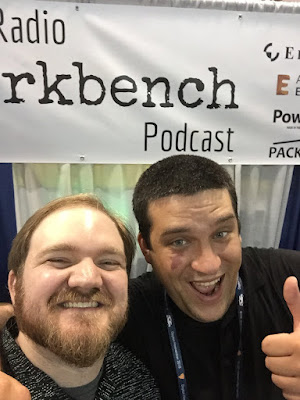 One part of Saturday that was awesome was that my very good friend Jeff Glass, KK9JEF, drove down from Chicago and I got to hang out with him during the day. He had actually been my original exposure to amateur radio waaay back in middle school when he already had his license, so it was great fun to hang out at Hamvention with him 15 years later with us both as active hams.

A quiet evening doing some local shopping and dinner, passing out in our hotels once again, and then it was Sunday. 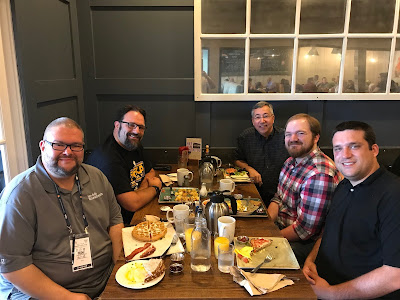 Sunday was laid back; breakfast with the HRWB entourage, a few of us dropped by the fairgrounds to kill another few hours, and I was off to catch my flight.

I was a little limited by having flown to Dayton, but if anything that was a very positive restriction on what I could buy at the flea market; no buying a boat anchor or 19" rack cabinet for me. Continues to avoid eye contact with Smitty who drove from California and had space in his car. 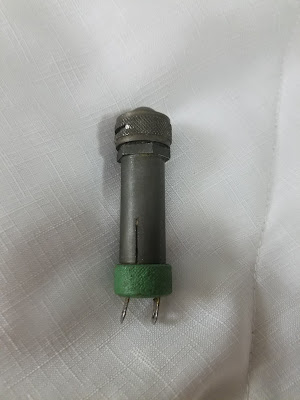 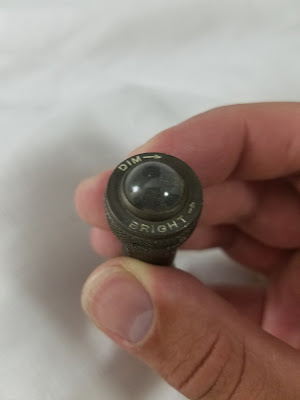 One of the first things I found was a neat little bayonet lamp holder, which includes a turnable ring to make it dimmer! I spent the rest of the weekend looking for the right bulb to put it in, but never did manage to find a booth selling the right lamp I was willing to spend money at. (The surplus dealer in the constructed tent had them, but their prices were so comically high I wasn't willing to buy anything from them) 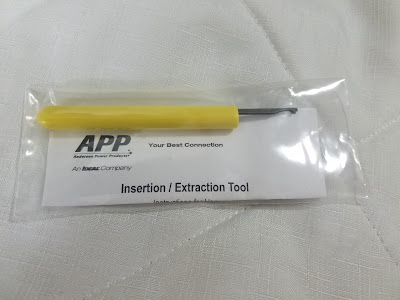 The Anderson PowerPole is the standard 12V DC power connector used by hams, myself included, so I've built hundreds of them, and have been meaning to get a real contact insertion/extraction tool for PowerPoles for a long time. For $15, I figured this was that moment when I'd finally own the right tool for the job. Life is too short to not have the right tools for the job. 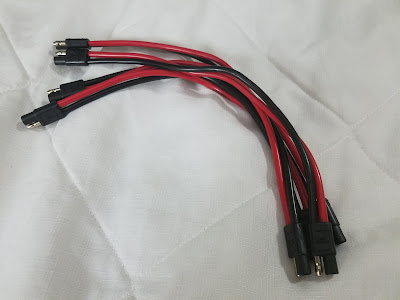 Of course, my favorite radios from Motorola don't use PowerPole, but the "bullet" or "RV" power connector, so I found some really nice 10AWG cables which I can cut in half and terminate with PowerPoles to be adapter cables from all of my 12VDC gear to Motorola. 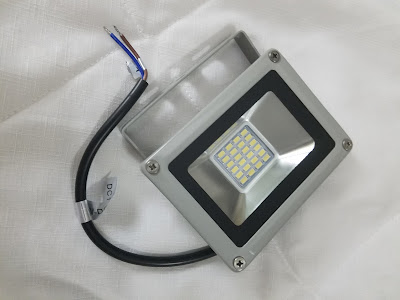 Little 20W 12VDC flood lamps are great for little work lamps when you've already got lots of 12VDC around. I'll be putting PowerPoles on this and throwing it in my DC power box. 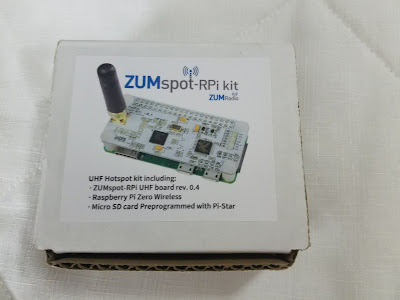 I finally broke down and got a DMR radio last week, so to make it generally more useful, I decided to get the ZumSpot kit, which has been a very slick hotspot experience. Take it out, put it all together (including a pre-imaged SD card), connect to the wifi AP coming from the Raspberry Pi, configure everything specific to how I want to use it through the web interface, reboot, and done. Now I can hang out on DMR talkgroup 31075 from my apartment or anywhere that I bring the hotspot tethered to my phone. 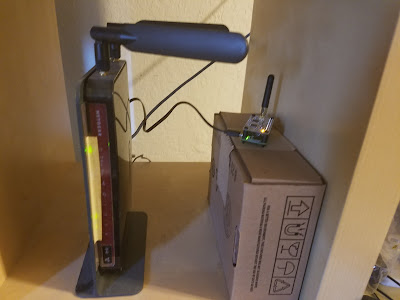 The hotspot now hangs out in my living room, pulling power off the USB port on one of my WiFi APs. HRO had a few cases for the ZumSpot, but those sold out early so shame on me for not buying it right away but waiting until the end of the day. 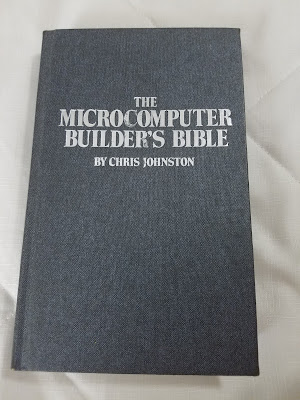 This was one of those things at the flea market where I got super interested when I saw it on a table, and the vendor was happy enough to see someone interested in it to just give it to me. I'm a total sucker for vintage engineering textbooks. :) 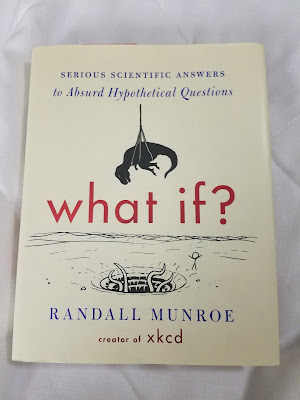 My second book for the weekend wasn't actually bought at Hamvention, but Saturday evening when I went to check out the local bookstores as a nice quiet way to spend the evening. 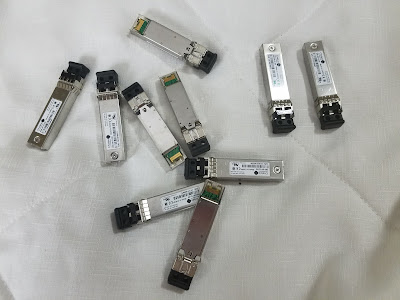 Probably my best deal for the weekend was talking one of the vendors down to $40 for a bag of ten SFP+ SR optics, which I can use to run 10Gbps Ethernet between my servers in my Hurricane Electric rack. 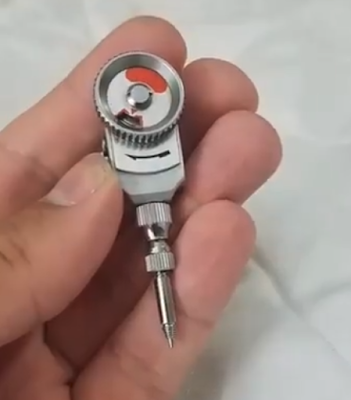 My favorite find was actually a mechanical camera shutter release timer, not because it's at all useful, but because it became a fun puzzle to hand to people all weekend and have them try and figure out what the hell it even was. I do technically have a digital camera with a threaded shutter release, and I did come home and prove that it works, but using the internal timer is much easier... Still $2 well spent.

Processing all of Hamvention hasn't been easy, and it's taken me a few days to really decide how I felt about it. Granted, my thoughts in one or two years will likely be different from here, but this is what I've got now: 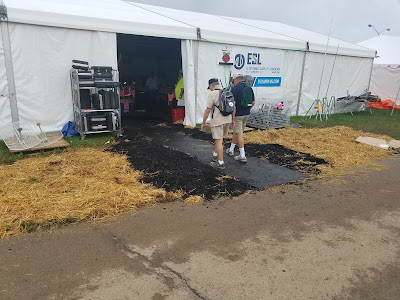 So, would I come back to Hamvention? Right now, given that it's always the same weekend as Maker Faire Bay Area?

Pfth. Not a chance.

It was absolutely fantastic to get to meet the rest of the HRWB podcast crew, and all our great listeners and fellow makers, but the small subset of people at Hamvention who were on the same wavelength as me with regards to why they were there just doesn't compete with the vast majority of the people at Maker Faire who are there for the exact same reasons as me. I consider myself a maker first and an amateur second, so I think it's reasonable that I should spend the third weekend of May at a conference that is all makers first and amateurs get a part of one aisle instead of a conference that is all hams and makers get a small fraction of the booths.

Now, if Hamvention weren't the same weekend as the largest annual gathering of my maker friends (which also happens to be much cheaper to attend since it's local to me) I could seriously see myself attending Hamvention on a regular if not annual basis. It's a perfectly fine event, and it should be on me to pony up and help form it into the event I wanted it to be, but it just can't compete with Maker Faire. I feel bad saying this since I do have several amateur radio friends who I got to see this weekend, but my priorities for this one weekend point to Maker Faire (which they should all come and experience themselves).

My original plan had been to alternate between Maker Faire and Hamvention, and I can still see that being a great plan for a tremendous number of hams more serious about amateur radio as a whole than me, but my interests in amateur radio are all just too niche and my interests in Maker Faire and the crafting and artwork and electronics that comes from that are all just too broad. I think every amateur should come experience Hamvention at least once to see if it's their thing, so I don't regret the experience, but every maker should also come experience Maker Faire.