Running NAT64 in a BGP Environment

IPv6 is one of those great networking technologies, like multicast, which makes your life as a network operator much easier, but is generally pretty useless outside of your own network if you try to expect it to work across the Internet.

People like to focus on how the percentage of traffic going over IPv6 has slowly been creeping up, but unfortunately until that number reaches practically 100%, an Internet connection without IPv4 connectivity is effectively broken. Ideally, everyone runs dual-stack, but the whole shortage of IPv4 addresses was the original motivator for IPv6, so increasingly networks will need to run native IPv6 plus some form of translation layer for IPv4, be it carrier grade NAT on 100.64.0.0/10, 464XLAT, or as I'll cover today, NAT64.

NAT64 is a pretty clever way to add IPv4 connectivity to an IPv6-only network, since it takes advantage of the fact that the entire IPv4 address space can actually be encoded in half of a single subnet of IPv6. Unfortunately, I also found it somewhat confusing since there are actually quite a few moving parts in a functional NAT64-enabled network, so I figured I'd write up my experience adding NAT64 to my own network.

There are really two parts to NAT64, and to make it a little more confusing, I decided to add BGP to the mix because it's a Sunday and I'm bored.

So to do this, I'm using a software package called Tayga, along with these numbers (to make my specific example clearer): 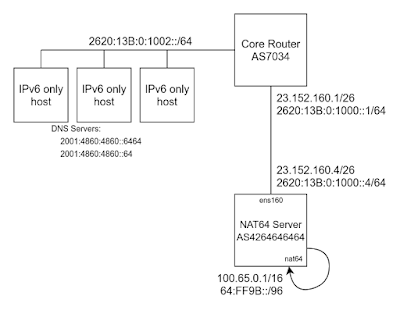 The source IPv6-only host makes a DNS query against a DNS64 server, which encodes IPv4 A records into the bottom 32 bits of the 64:FF9B::/96 subnet as a AAAA record, which gets routed to the NAT64 server:
[SOURCE IPv6 ADDRESS] > 64:FF9B:0:0:0:0:[DESTINATION IPv4 ADDRESS]
Tayga allocates an address out of its 100.65.0.0/16 NAT pool for the IPv6 source address, and translates the packet on the nat64 loopback interface to:
100.65.X.Y > [DESTINATION IPv4 ADDRESS]
The iptables nat MANGLE rule set up by Tayga then NATs the local 100.65.0.0/16 subnet to the one public address and sends the packet on its way:
23.152.160.4 > [DESTINATION IPv4 ADDRESS]
And dramatically, the IPv6 packet has been translated into an IPv4 packet, with the NAT64 server holding two pieces of NAT state; one in Tayga for the IPv6 to IPv4 translation, then one in iptables for the CGNAT address to public address translation.


Starting from a stock Ubuntu 18.04 system, sudo apt install tayga gets us the needed NAT64 package, and edit the /etc/netplan/01-netcfg.yaml file to match your network.

The Tayga config (/etc/tayga.conf) is relatively short, ignoring all the comments. The main parameters to update are the "ipv4-addr" so it's inside your local use IPv4 block, "dynamic-pool" to match the ipv4-addr, "ipv6-addr" to your public IPv6 address on the server, and turn on the "prefix 64:ff9b::/96" option.


The second file you need to edit to enable Tayga is the /etc/default/tayga file, which feeds parameters into the /etc/init.d/tayga RC file (which you don't need to touch).

Key parameters to note in the defaults file is to change RUN to yes, and make sure both CONFIGURE_IFACE and CONFIGURE_NAT44 are turned on so the RC file will do all the iptables setup for us.


At this point, you should be able to sudo service tayga start and do a sanity check by looking at your IPv4 and IPv6 routing tables and seeing the prefixes referenced in the Tayga config added to a new nat64 tun network interface. Listing:


Unfortunately, while the Tayga RC file does a good job of setting up the tun interface and NAT iptable rules, the one thing it doesn't do is turn on IPv4 and IPv6 forwarding in general, which is needed to forward packets back and forth between the public interface and the nat64 tun device. Uncomment the two relevant lines in sysctl.conf and restart. Listing:


Setting up BGP to advertise the NAT64 prefix


For exporting the /96 of NAT64 prefix back into my networks core, I decided to use the Quagga BGP daemon. This is a pretty standard configuration for Quagga, exporting a directly attached prefix, but for completeness...

I then interactively configured BGP to peer with my core and issued the write mem command to save my work. There's plenty of Quagga BGP tutorials out there, and the exact details of this part is a little out of scope for getting NAT64 working.


At this point, my network has NAT64 support, so any IPv6-only hosts which are configured with a DNS64 name server can successfully access IPv4 hosts. I wouldn't depend on this one VM to serve a whole ISP's worth of IPv6-only hosts, but for a single rack of VMs which just need to be able to reach GitHub (which is still amazingly IPv4 only) to clone my config scripts, this setup has been working great for me.