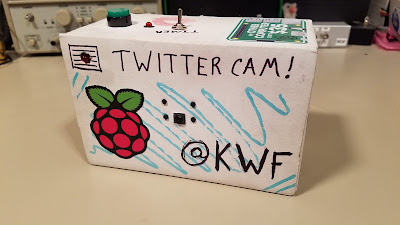 This last weekend was Maker Faire Bay Area, which is easily one of my favorite events of the year. Part county fair, part show and tell, and a big part getting to see all my Internet friends in one place for a weekend.

This year, I got struck with inspiration a few weeks before the event to build a camera that could immediately post every picture taken with it to Twitter. I don't like trying to live tweet events like that since I find it too distracting taking the photo, opening it in Twitter, adding text and hashtags, and then posting it. This camera would instead upload every picture with a configurable canned message, so every picture will be hashtagged, but I have a good excuse for not putting any effort into a caption for each picture: "this thing doesn't even have a keyboard"

I went into this project with the following requirements:


The most interesting challenge for me was coming up with a robust way for the camera to be able to take one or multiple photos without Internet connectivity, and then when it regains Internet ensure that all of the pictures got delivered to Twitter. It would be possible to code some kind of job queue to add new photos to a list of pending tweets and retry until the tweet is successfully posted, but I only had a few weeks to build this whole thing, so chasing all the edge cases of coding a message queue that could even tolerate the camera getting power cycled sounded like a lot of work.

I eventually realized that guaranteed message delivery for a few MBs of files while experiencing intermittent Internet is already actually a very well solved problem; email! This inspiration got me to where the camera will be running a local Python script to watch the shutter button and capture the photo, but instead of trying to get the picture to Twitter, instead attach it to an email and send it to a local mail server (i.e. Postfix) running on the Raspberry Pi. The mail server can then grapple with spotty Internet and getting restarted while trying to deliver the emails to some API gateway service to get the photos on Twitter, while the original Python script is immediately ready to take another photo and add it to the queue regardless of being online. 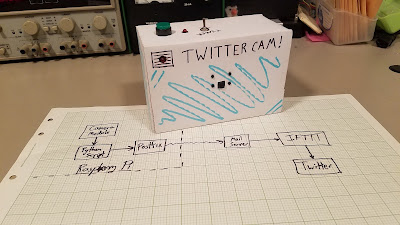 
The Python script running on the Raspberry Pi is available on GitHub.

The camera was really successful at Maker Faire! I enjoyed being able to snap photos of everything without needing to pull out my phone, and really loved the looks of amusement when people finally figured out what I was doing with a colorful box covered in stickers with a blinking LED on the front.

I ended up taking several HUNDRED photos this weekend (the good ones are available to browse here). Unfortunately, this means I very quickly found out that IFTTT has a 100 tweet per day API limit, which they don't tell you about until you hit it. Talking to others, this is apparently a common complaint about IFTTT where it's great to prototype with, but as soon as you try and actually demo it, you hit some surprise limit and they cut you off. If I had known they were going to cut me off, I would have sat down and written my own email to Twitter API gateway, but by the time I realized this problem Friday of Maker Faire, sitting down to try and write an email parser and using Twitter's API directly wasn't an option anymore. GRRR. Two out of Five stars, would not recommend IFTTT.

When I opened a ticket with IFTTT support, they said I was out of luck on the 100 tweet/day limit, and suggested I went and got a Buffer account, which is a paid social media queue management service, so my per day tweet limit would be higher, but we've now got one more moving part in that the photos are going Raspberry Pi - my mail server - IFTTT - Buffer - Twitter. UNFORTUNATELY, Something wasn't happy between IFTTT and Buffer, so only about 20% of the API calls to add my photos to my Buffer queue were successful. Buffer also sucked for what I was trying to do because it's more meant for uploading a weeks worth of content as a CSV to post three times a day on social media. To get Buffer to post all of my photos, I had to manually go in and schedule it to post the next photo in my queue every five minutes... all day... so I was sitting there on my phone selecting the next five minute increment and clicking "add to schedule" for quite a while. 1/5 stars, will definitely never use again.

So the irony here is that the photo delivery from the Raspberry Pi in the field back to my mail server was rock solid all weekend, but getting it from my mail server to Twitter fell on its face pretty hard.

The other notable problem that I ran into while stress testing the camera the week prior to Maker Faire was the fact that Postfix was getting its DNS settings when it started, and seemed to not expect the server to be roaming between various WiFi networks, so I needed to edit the /etc/dhcpcd.conf file to force the Raspberry Pi (and thus also Postfix) to just use some public DNS resolvers like 8.8.8.8 and 1.1.1.1 instead of trying to use my Phone's DNS resolver, which obviously wasn't available when my camera roamed to other WiFi networks like the one at Supply Frame's office. 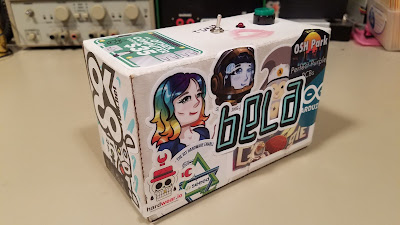 I also spent all weekend adding stickers to the camera's box, so by the end of the weekend the cardboard box was beautifully decorated.


Material used for this build:

Starting from a clean Raspbian Lite image, run raspi-config and

Starting with Postfix, we need it to be able to relay email out via a remote smarthost, since pretty much no consumer Internet connection allows outgoing connections on port 25 to send email. It's possible to use Gmail as your smarthost, so feel free to search for guides on how to specifically do that, but I just used a mail relay I have running for another project.

To do this, I first created a new file /etc/postfix/relay_passwd and added one line to it:
smtp.example.com USERNAME:PASSWORD

This file gets compiled into a database (relay_passwd.db) that postfix uses to look up your username and password when it needs to log into your relay. Conceivably you could have multiple sets of credentials for different hosts in here, but I've only ever needed one for my relay.

I then changed the permissions on it so only root can read it, and generated the database file postfix actually uses to perform lookups against this host to username/password mapping.

At this point, you should be able to use a program like mutt or sendmail on the Raspberry Pi to send an email, and watch the respective /var/log/mail.log files to see the email flow out to the Internet or get stuck somewhere.

Tweaking Postfix defer queue behavior - Since using Postfix as a message queue on a portable Raspberry Pi is a bit unusual compared to the typical Postfix application, which probably involves a datacenter, we expect the Internet connection to be quite a bit more flaky, so retries on messages should happen a lot more often than on typical mail delivery. I changed it to start retrying emails at 100 seconds and then Postfix doubles that up to the maximum of 15 minutes, which seems like a reasonable upper limit for the time my phone would go offline and then find signal again.

The actual camera script is available on GitHub, including the modified dhcpcd config file, a systemd service to start the Python script on boot, and an example copy of the configuration file that the tweetcam script looks for at /etc/tweetcam.conf which includes where to send the picture emails and what to put in the subject and body of the emails. 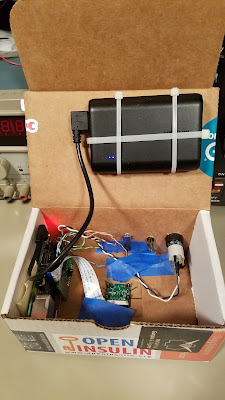 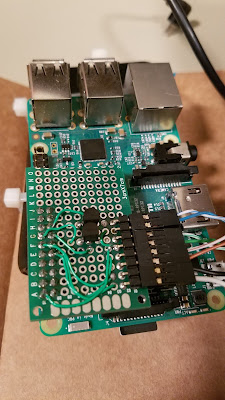 The hardware was a small square of perf board to act as an interface between the Raspberry Pi 40 pin header and the buttons / LEDs mounted in the box. For the inputs, the Pi's internal pull-up resistors were used so the button just needed to pull the GPIO pin to ground. A 0.1uF capacitor was included for debounce, which ended up not really mattering since it took a little more than a second for the python script to capture the photo and send the email. 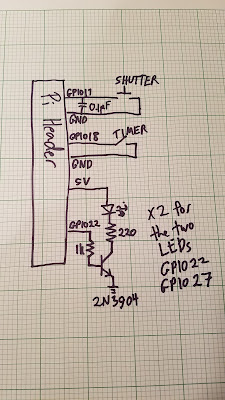 I put an NPN transistor buffer on both of the LEDs using a 2N3904 transistor, which I probably could have done without, but I hadn't decided how big, bright, or how many LEDs I wanted to drive when I soldered the perf board.

The camera module was plugged into the camera CSI port on the Pi.

In the end, this project was a huge hit and I particularly appreciated the nice tweets I was getting from people who couldn't make it to Maker Faire and were enjoying getting to see ~500 photos of it tweeted live from me walking around. I suspect I'll end up continuing work on this project and try and fix some of the issues I encountered like the IFTTT Twitter API limits and how really underwhelming the image quality is coming out of the OEM Raspberry Pi Foundation camera module...