Here's a circuit I put together Sunday night. It's real simple and is designed to drain the last remains of power out of dead batteries.

It's impressive because you can run a 3V LED off of a battery giving something more along the lines of 1V. (I'm measuring 0.91V right now) 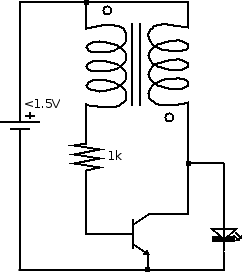 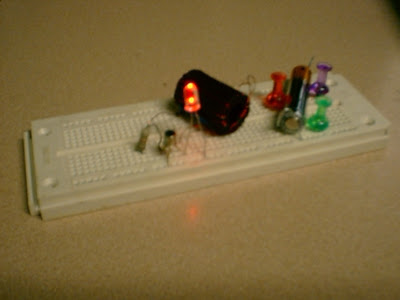 I've been trying to get some readings from the circuit, but my volt-ohm meter can only give me so much. I really need to figure out who to be friends with to get access to an oscilloscope.
So now that I've failed to make any meaningful measurements, other than that V(output)*DutyCycle(output) = V(input) * 100%, I'm going to venture a guess as to what is going on.

DISCLAIMER: I'm a freshmen level Mechanical Engineer. I've spent some time studying electrical circuits, but not enough to really make any kind of analysis of this. Everything from here on is total guesswork.

So I think the battery charges the inductor from the positive terminal, generating a magnetic field around the windings. Once the charge travels through the left winding and the 1k resistor, it will open the transistor and ground the right winding. This will cause the right field to collapse, which will in turn pull the left field down with it, creating the higher voltage (V(out) = V(right) + V(left)). As the collapsing right field pulls down the left field, this closes the transistor and shunts this energy into the LED instead, so it lights. As the right winding drains, the battery charges the left winding again and the cycle repeats.