In some situations, having a car alarm with a remote panic button can make a lot of sense.  The traditional somebody-is-mugging-you one comes to mind, but even for much more mundane uses such as trying to find your grey colored Toyota Camry in pretty much any parking lot.

Fortunately there is a relatively easy fix, that I've actually done a few times on various remotes already. Usually what I do is just cut the actual button rubber down so it becomes more difficult to press, and less likely to be pressed accidentally in your pocket, but sometimes the actual button in the remote will fail, which means either buying an entirely new remote, or just disabling the remote panic feature and to live without it. 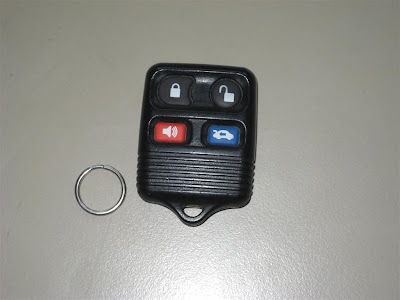 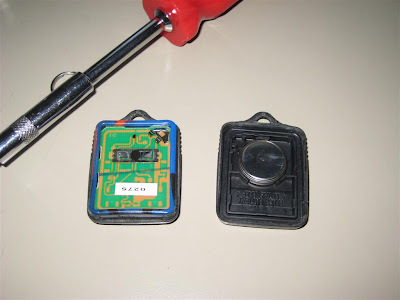 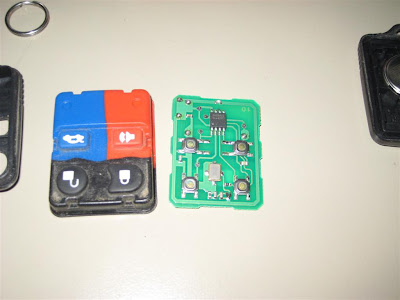 The button covers were all a single sheet of multicolored rubber, molded so it would look like four buttons. Thank you wonderful modern technology: you make our lives so much easier, when you work. Cutting that off just didn't seem like a good idea, breaking the seal on the electronics, etc.

That worked out just as well, anyways, since a little poking around with a volt-ohm meter made it pretty clear that this wasn't a case of fat fingers. The panic button (top right in the picture) was really defective, naturally shorted out, just waiting for some good reason to cry wolf. This meant I needed to actually disconnect the button entirely.

I first tried using my soldering iron to heat and lift off the entire button, but I've never really had much success with surface mount components like these, so I gave up on that fairly quickly. I instead opted to simply cut the trace. A little scratchy scratchy with an exacto knife, and the button is officially out of service. 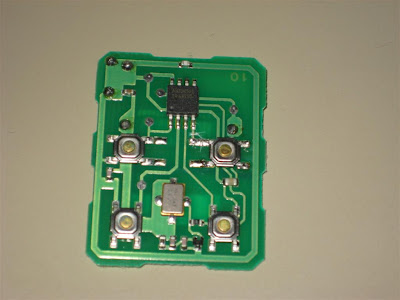 You can see the scratch between the button and the 4th pin on the IC on the vertical trace. Tested it with my ohm meter to make sure it was really open, put everything back together, and we have a much calmer remote (get it? no panic - calmer. Man, I kill). Another day saved by not being afraid to open something and figure out what's up. Carpe diem, people.