The fun continues with my new temperature logger. After leaving it running for a week in my room, I decided to give it a shot at my refrigerator. 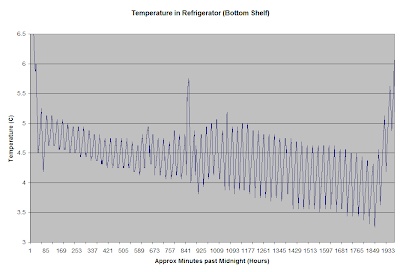 Click to enlarge.
To say the least, I was awfully surprised by the data once I graphed it. First of all, I expected it to be much more temperature stable than it really is. With a slope that high, it's clear that you really don't want to open the door when the power is out, because it is already rapidly approaching room temperature.
I'm really quite interested in seeing what the difference is between the bottom and top of the fridge, and getting more than a day and a half of data. Luckily, I just happened to have ordered TWO temperature sensors, so the only things preventing me from logging two simultaneous temperatures is the lack of spare hookup wire (left my big spool in Sunnyvale -_-), a dozen lines of C, and a fierce competition between roommates about whether we should be keeping temperature sensors or food in the refrigerator.