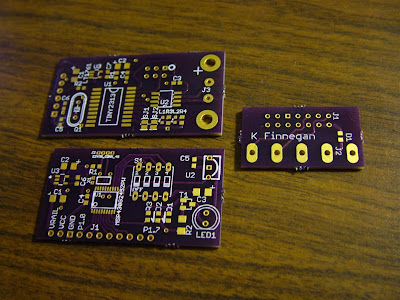 I submitted another order with the wonderful Dorkbot PCB prototyping service a few weeks ago, and promptly got it back the usual 14 days after ordering it.  From top to bottom: 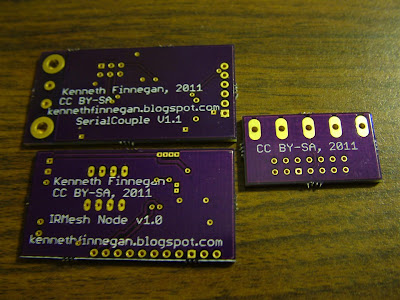 And would you look at all that beautiful silk screen on the back; with my name and everything!
My summer internship has been keeping me as busy as ever, and I see no foreseeable chance to get back to my electronics workbench in Davis before school starts, so I'm afraid I'm going to be spending most of the summer doing little more than pining over these unpopulated boards.  The next Electronics Flea Market is in two weeks, so anyone in the area should come out and say hi, either in the parking lot at De Anza or at the breakfast at Bobbi's afterwards (around 9:30am).