How to Correctly Advertise in Social Media 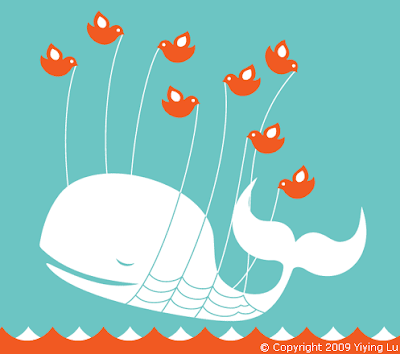 It's hard to deny that the buzz-word for marketing for the last few years has been social media and networking.  If a company or organization doesn't have a Facebook, Twitter, et al., you'd get the feeling people think they just aren't trying hard enough and may as well not exist.  The problem is that once a company gets a Twitter account, what the heck do you do with it? This is a pet-peeve that's been bothering me, as I have been barraged by friend requests and tweets from companies that just don't understand how to use 21st century communication channels and how to not be annoying about it.  (I've also apparently managed to pick a company name for my twitter handle, which they weren't so happy about)

There are countless examples of what NOT to do with social media; companies that literally treat their twitter stream as a place to regularly dump advertising copy.  Commercials work because they jump out at you in the small spaces between scenes of a TV show or between songs on the radio.  I am not going to start following a company on Twitter just so I can mix their tweetvertisements between my friend's, actually interesting, tweets.


Social media advertising doesn't come for free.
The rest of us get to have Facebooks and Twitter accounts for free because we are (to some fraction of the rest of humanity) interesting and engaging human beings.  Just because you're a corporation doesn't mean you get a free pass on that requirement.  I give people a reason to follow me on twitter by using it to give sneak peaks on future projects, post one-off pictures of projects that don't warrant full blog posts, and by generally being a person teetering somewhere between interesting and amusing.

As a company, you're inherently neither interesting nor a person.  Some companies do enjoy some success working around this by recruiting internal personnel to become very visible on social media, or they may just keep employee moral so high that they willingly create strongly-branded personal accounts supporting the company; an example being Tektronix's @JoelAtTek.  I couldn't tell you whether Joel's account was specifically prompted for by "the company" or if Joel just decided that he likes working at Tektronix so much that he'd put it in his user name, but in either case, 800+ people follow him on Twitter and see "Tektronix" in their twitter steam every day.

Of course, presenting a specific personality as the face of the company can have risks.  For every Steve Jobs, there's a dozen scandals where employees post strong opinions or inappropriate statements which hurts the company.  If Joel were to stop working for Tek, at best their social media presence disappears, and at worst becomes disingenuous, which can hurt even more when it comes to light that some intern has been running the @HappyEmployeeAtCompany twitter account for the last six months.


Give us a reason to follow you.
So what if you aren't comfortable presenting individual people, and instead want to keep your corporate image, well, corporate?  Simply, it all comes down to incentives.  You need to give your customers a reason to follow you, and despite what you want to think about social media, it usually isn't free.

The obvious first incentive is giveaways.  People online love free stuff, and will flock to it like Methodists to coffee and donuts.  This works best when you're able to target the desired demographic by selecting giveaways that your customers would find of value.  This is unbelievably easy in electronics; there are countless books, development boards, equipment, consumables, etc, that you can give away, and which quite possibly can prompt the recipients to post reviews or messages of gratitude online once they get it, which helps to multiply your message.

But even giveaways can be seen as too shallow of an interact with your customers.  The true key to success in the social media sphere comes down to putting serious time and effort into producing content and make following you informative and worth while.  The internet has leveled the publishing playing field, and content is king.  The traditional press release worked when your were sending dittos of it to journalists who desperately needed to fill X number of column-inches by tomorrow, but the contemporary content consumer has no problem will filling their front page with pictures of cats, so you need to make your press releases accessible, engaging, and interesting.  If your company has exciting news, make it sound exciting.  If it doesn't, make it at least sound exciting, or get your employees to start making better news.


Social media advertising still has a cost.
If you are now thinking to yourself "gosh, all of these giveaways and all of these pictures and videos are going to cost a lot of money and employee time," then you've probably gotten my point.  Social advertising is not free; anyone who tells you that is either lying or doesn't know what they're talking about.

It's not only going to cost money, but requires a creatively and charisma that throwing advertising dollars at ad agencies doesn't.  If your company already happens to have some kind of "Application Engineering Department" which already works with customers to help them use your product, make sure that they have a good video camera and managerial support to start building and documenting these novel and interesting applications, not just for current customers, but as part of your company's press releases.  If you don't have a department like this, start looking for individual employees that can come up with ideas for what to do with your product, and give them the time and resources to execute on them.  Social advertising can't start from a company's marketing department.  The marketing department will absolutely still be involved with social advertising, but they need to start getting to know your technicians and engineers much better, and are going to be spending more time polishing content produced by other departments than writing optimistic sales copy based on technical specs.


Marketing departments can only sell content.
They don't create novel or interesting content relevant to your product, they can only sell it.
And remember, on the internet...

@Digikey is one of my favorite case studies in exactly how to utilize social media to get your company name and message out, and how to use Twitter to leave customers with a warm personally-served feeling, even when you're a mail-order company on the other side of the country or world.

First, they have several regular weekly giveaways. Most of them are trivial swag like branded water bottles, pocket knifes, and sweatshirts, but then again, I love my Digikey sweatshirt and wear it all the time.  They also have much more targeted giveaways where they give away Kindles or Beagleboards, or even let you pick any part out of their catalog to win.  Sure, giving away a Kindle may seem like a lot for social advertising, but you have to realize that Digikey bought a genuine company shout-out from the guy they sent it to.  The playing field has been leveled, and you will be surprised how loud someone can thank you when they happen to write for a website with several hundred or thousand subscribers.  Sure, most of your giveaways will quietly disappear, but so does most of your traditional ad impressions.  On the other hand, you get to roll for that 0.1% chance that someone will write about how great a company you are, and you just got a couple thousand organic ad impressions without even knowing about it.


You can do better than just throwing money at the problem.
What puts Digikey in a class of their own isn't that they have regular giveaways.  Even I have giveaways, and it's not like this site is particularly sales-focused.  What Digikey does that is so phenomenal is that they clearly invest not only money, but engineering manpower, in their social media presence.  Take for example, the following typical exchange between myself and Digikey on Twitter: 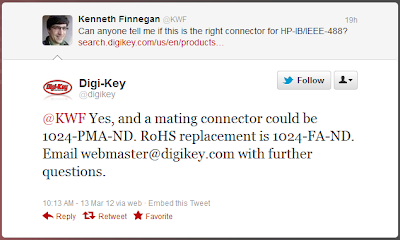 I'm working on a project and drilling down through Digikey's online parametric search engine to try and find a connector so I can build an IEEE-488 adapter.  Of course, IEEE has all the detailed documentation on the standard online behind their paywall, but I'm not particularly in the mood to leave my apartment to get on campus or log into the UC Davis VPN to try and get at it, so I'm trying to find the right connector based on a crude outline on Wikipedia and some sketchy references to IEEE-488 on websites like AllDatasheet.

I didn't even direct the question directly to Digikey's account.  I found something I thought looked right, and figured I'd throw it out to my Twitter friends, most of whom stand a chance of knowing this, and see what I get back.  The fact that Digikey responded and not only answering my question, but also provided the non-EOLed part and a mating connector, is... awesome.

Sure, it probably isn't a big deal that they managed to sell me a $4 part, and if you look at it like that, you'll never justify the man power needed to maintain this.  Then again, it may be a big deal that they put a $4 part in some engineer's parts box with a Digikey part number printed on the bag.  What happens when your customer finishes the prototype and needs to buy another 100k of their whole BOM?

This was a rant I've had kicking around for some time now.  I'm pretty much done with school right now, so I know that at the very least I am looking forward to many more blog posts in the coming months, unless some company comes in and ruins the party by offering me a job...