My Tower is Famous 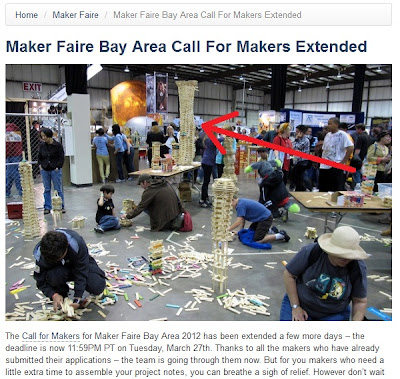 It's not even April yet, and I'm already getting excited about Maker Faire Bay Area in May.  Maker Faire is an amazing event where everyone I regularly interact with online all make the annual pilgrimage to the Silicon Valley and spend a weekend checking out the best of the best of the maker community.

Last year was the first year I was able to make it, and I was just blown away.  Really, I was pretty much overwhelmed. I'm not a huge fan of dealing with large crowds, and this thing was packed to the fair grounds limits from the moment the gates opened at 10am.  After fighting crowds for two hours, I needed to take a break, so I managed to find a booth that was empty except for a bunch of Jenga-sized building blocks and lots of small children.  I'm bigger than small children, so I could deal with that for an hour or so.

Turns out, the tower I built at 1pm never got knocked down on Saturday. Ever.  It just stood there for six hours as a testament to the utter respect maker's have for each other's creations.  Make Magazine's blog just posted a picture from last year's faire with my tower in the background.  This was well past when I was still there working on it, but it's kind of neat to at least see my tower make the big time.

If you happen to be at all remotely close to NorCal, or even just have the ability to make it to the Bay Area, I can't urge you enough to come out for Maker Faire Bay Area on May 19/20.