I missed the first half of ESC on Monday and Tuesday, but I managed to get up to San Jose today to walk around and talk to vendors and see who I would run into.  It was an exhausting day, but I had a lot of fun and met a lot of interesting people. 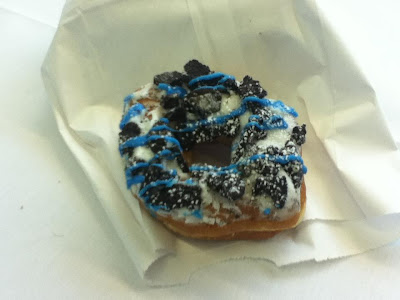 In good conference tradition, I opened the event with donuts.  Last year I offered one to the engineer sitting next to me waiting for the keynote, who turned out to be Chris Gammell; a pretty cool guy. Just to make sure Chris feels bad for not coming back this year, I upgraded to the wonderfully over-the-top Psycho Donuts. 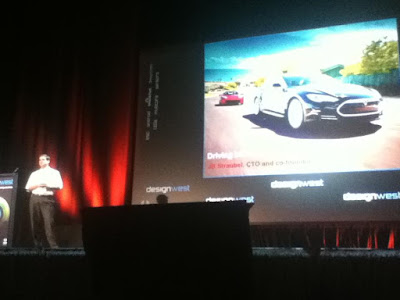 Today's keynote was JB Straubel from Tesla Motors. It was an interesting keynote.  I can't say it was as good as last year's keynote, but comparing any keynote to Woz is probably not fair.

The one thing that was kind of odd was that they had the keynote across the street in the Civic Auditorium. No WiFi made it entertaining watching everyone trying to get cell phone reception, and even though I was only the third person in line, the auditorium was warm when they let us in, so an hour with a couple dozen kW of people did get mildly uncomfortable. Like every year, they made a futile attempt to get everyone to stay for the Industry Address by giving away an oscilloscope, but the whole crowd got up and left after the keynote (with the added excitement of getting to play IRL Frogger on the way back to the conference hall). 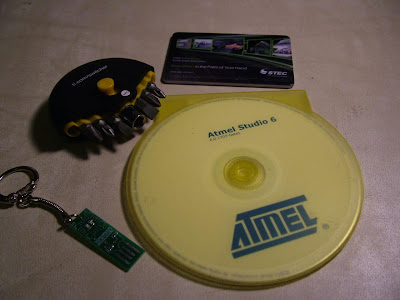 First thing after the keynote was picking up the free TechTote.  It didn't have anything as good as an ST dev kit like last year, but a few interesting trinkets. Always in good form, TI gave away a reasonably useful combination screwdriver set. STEC gave away a 2GB credit-card profile USB flash drive with SSD marketing literature on it.

Softeq had a rather clever giveaway where they gave you a key chain with LEDs on it; show up at their booth and if your key chain lights up green you get a free set of Buckyballs. Of course, I know a USB connector when I see one, so I saved myself the trouble of fighting the crowd and pulled out my Kindle wall charger.  Blue. Rats... The one time I don't bring my 0603 green LEDs and a rework station to ESC...

Atmel gave me... a CD-R with Studio 6 on it. It's probably good AVRs are supported by GCC, because it's really hard to beat vim in my book. 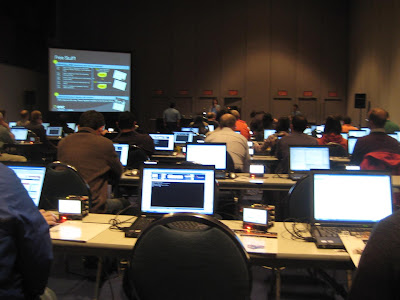 The engineer from Intel sitting next to me at the keynote was planning on spending all day in the Freescale Tower hands-on development track, so I figured I'd check it out.  The dev platform was a neat "tower" with the controller and IO boards all plugging into a PCIe backplane.  I was most interested to see what a one hour introduction to real time operating systems would consist of. 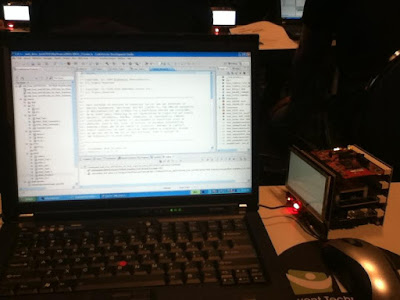 It was about what I expected.  They did a very good job of setting up mostly-done code so we could spend the hour just writing the 12 lines of code it took to grok the concept of IPC on an embedded RTOS, but it was still a mad rush for the instructor and most students to try and finish the 15 page packet in 50 minutes. I managed to finish with about 10 minutes left, so I started playing around with the demo HVAC program and managed to add simulated weather to the imaginary room this "thermostat" was controlling, just to make sure my thermostat towered (hahaaa) over the rest. 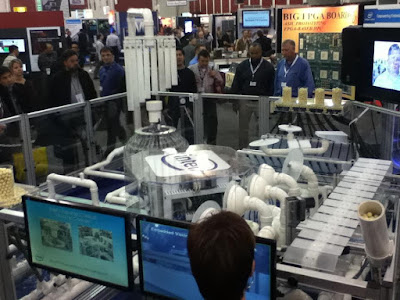 Having decided that conference classes are about as good of a use of my time as I expected, I cut out for the expo floor to pound the pavement for the rest of the day.  Any mechanical engineer growing up in 2001 will recognize Intel's real life realization of Animusic's Pipe Dream.  A rather impressive demo of their (or really any) industrial control system.  I don't know why I was so surprised or disappointed that the audio turned out to all be MIDI synthesized... Probably prudent, because some of the ball launchers were firing a nice 30 degree spread. 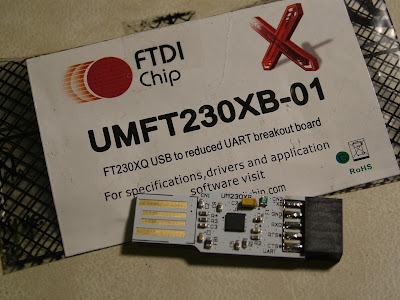 FTDI was there, and they gave me the demo board for their new FT-X series FT230X basic UART. I'm super excited about using this part in my future projects, because they managed to fit just the useful parts of the FT232R USB-to-serial adapter in the much smaller 4x4 QFP and got the price down to the much more attractive $2.30 for singles. 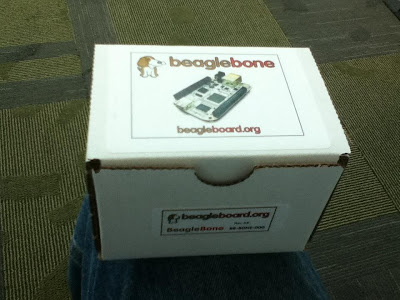 Texas Instruments continues to impress me with how well they handle their university and developer relations.  One of the engineers started joking with me about how he wouldn't talk to me because I had a media badge, so I jokingly retorted with "well then I'll just take this BeagleBone and be off." 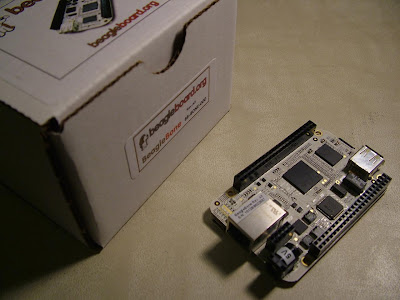 His "Sure, you want one?" response and pulling one out from under the counter was not what I was expecting at all.  The BeagleBone is a 720MHz ARM computer with 256MB of RAM, a microSD slot, host and slave USB, Ethernet, and 64+ GPIOs.  The fact that it runs any ARM-distro Linux you want puts it squarely closer to the PC/104 embedded computer controllers than the 8-bit Arduino you'd expect from the form factor.  Look forward to some projects built on this in the coming weeks, sponsored by Texas Instruments.

I tried to pull the same trick with one of AMD's PC/104s, but they just had security escort me from the building... (kidding)  Seriously though, AMD was talking about launching a comparable dev kit to the BeagleBone in the coming months. I missed the exact name, and can't find anything about it online.  AMD was clearly spending  most of their energy pushing the new Xi3 platform, which are impressively small cube computers for computer labs or high-density server rooms.  A neat little device, but quite possibly the most obnoxious sales person I've ever had to interact with at ESC.