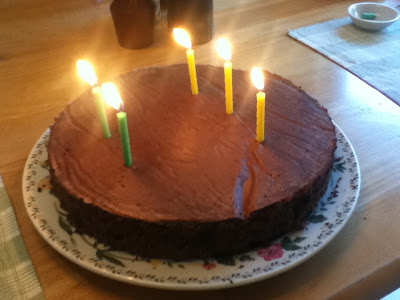 I'd like to just say thank you to everyone who sent me birthday wishes and presents this week.  It was 23 years ago on July 7th that my wonderful mother brought me into this world, and in what would turn out to be befitting of my personality, I saw little motivation to breathe for myself when someone else had been doing it so well for me for the last nine months.  Luckily, that little road-bump was overcome and I've managed to make a respectably good ado of my first 23 years hanging out around here.

Due to my trip to Dallas and getting back 10AM PDT on my birthday, my family was kind enough to give me a mulligan and we celebrated my birthday on Sunday instead. 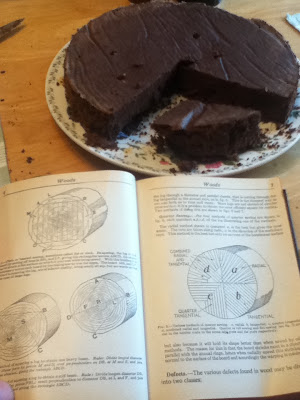 The highlight of the day was my favorite - a flourless chocolate cake.  If you get the feeling that it looks like a giant block of dense fudge, don't panic - that is because it really does turn out like a dense block of fudge, and that is awesome.  Of course, it never quite slices well, so I figured I'd apply one of my birthday presents (A manual on lumber woodworking) and cut my cake like a lumber mill, because that's just how I roll. 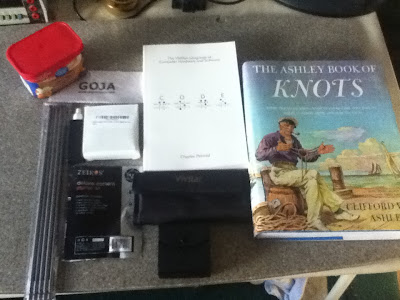 The birthday gifts were numerous, and I would have inevitably missed some, so I'll only talk about those from my sit-down-to-presents proper.
Again, thank you to everyone who sent me birthday wishes and presents; they were all very much enjoyed and appreciated.

* - I say a mother, because using my mother as an example wouldn't be particularly fair; she majored in computer science and worked for HP writing compilers before coming to the realization that dealing with my antics as  a child full-time would be so much more fun than working.