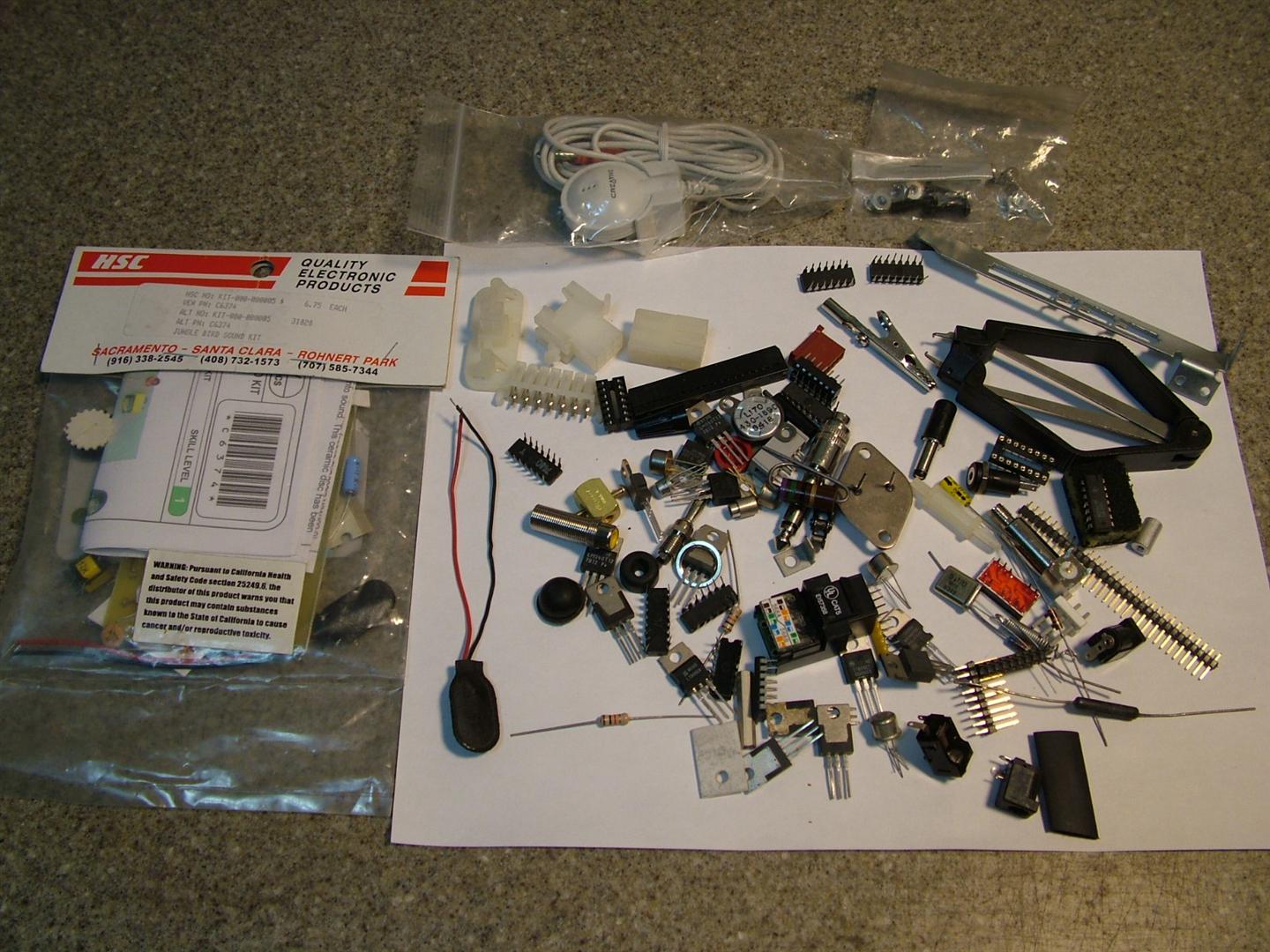 I was at my favorite surplus electronics store today picking up some fuses, when I found a big box of stapled-shut ziplock grab bags for $3.95.  As always, it's the luck of the draw, but this one certainly paid for itself.  I picked it out because it appeared to have some sort of kit in it (a jungle bird sounds circuit?!). 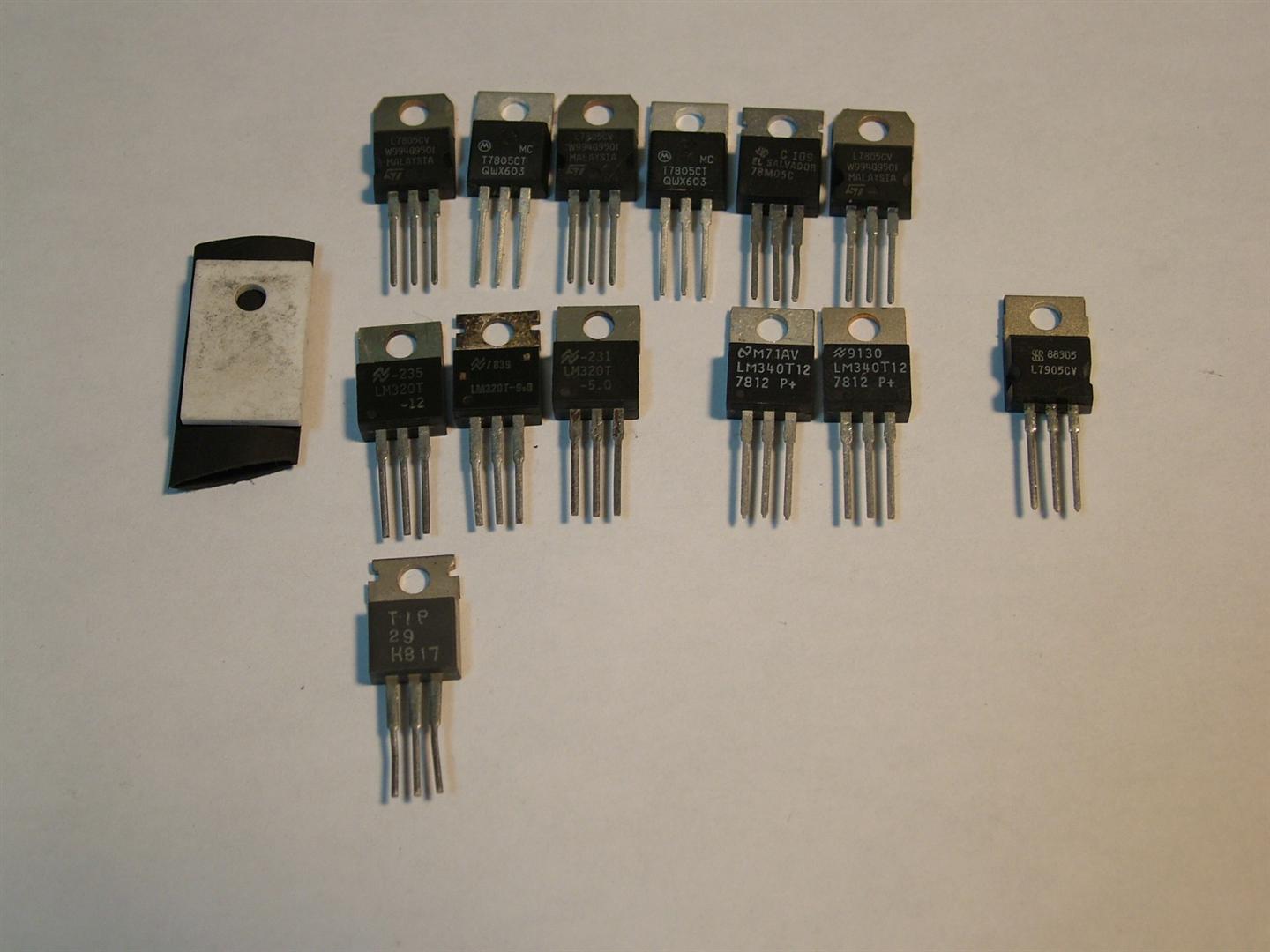 The linear voltage regulator selection out of this bag is flawless; 6x 7805, 2x 7812, 7912, 7909, and 2x 7905.  Also shown is a high power TIP 29 bipolar transistor and a ceramic insulating plate.  The plate is useful when you need to attach a heat sink to a TO-220 package like these, since the metal tab is usually electrically connected to the center pin.  For linear voltage regulators, this isn't problematic because the center pin is ground and heat sinks are usually grounded (or even just the physical chassis of a piece of equipment).  Unfortunately, pretty much everything except voltage regulators can't have their middle pin grounded, so you use a ceramic plate like this and non-electrically-conductive bushings or bolts to attach the TO-220 to the heat sink thermally, while keeping it electrically isolated. 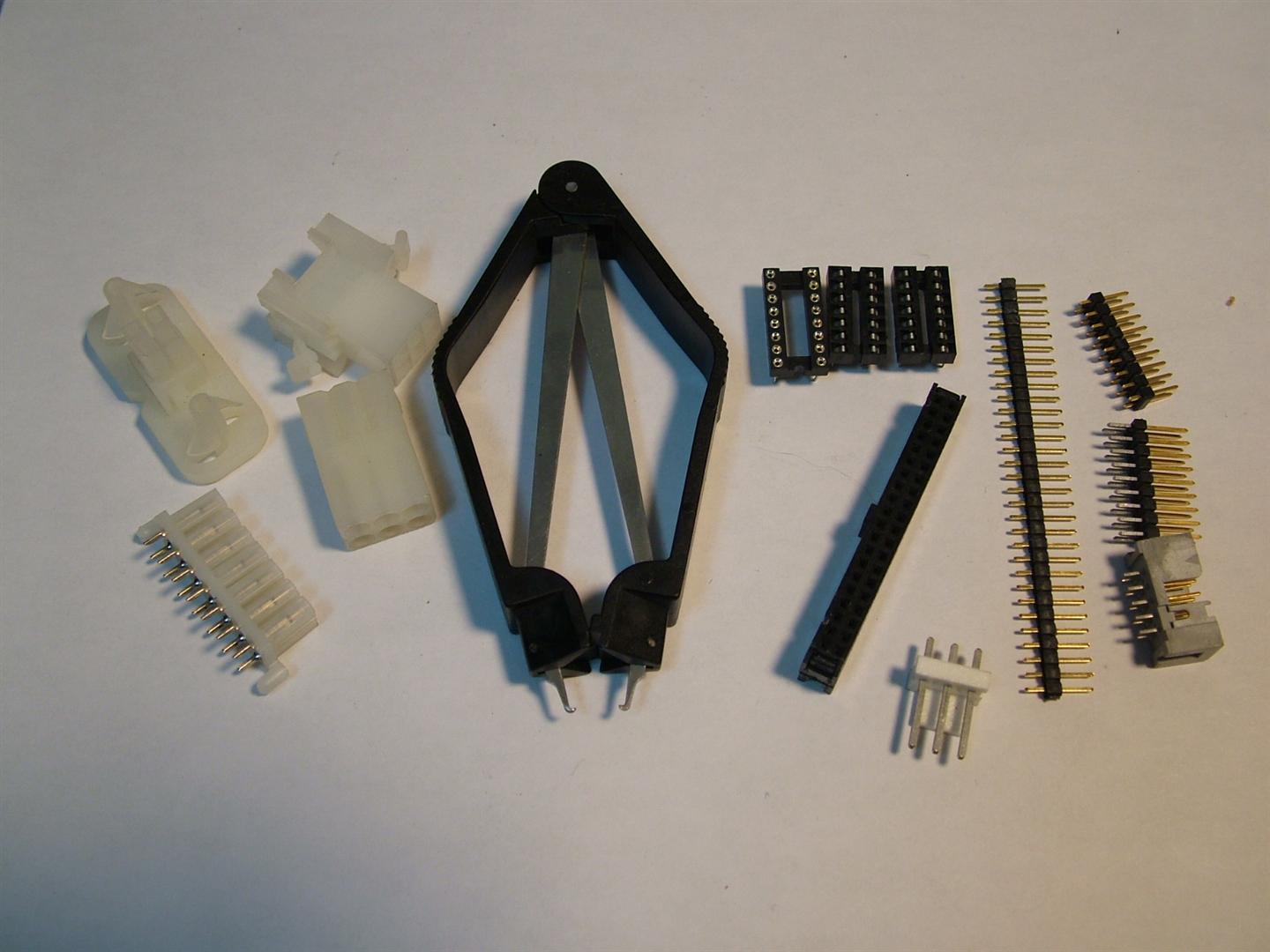 .
Edit: Thanks Randy for making me take a second look at it; he's probably right that this is a PLCC extractor.  Not nearly as useful as a DIP extractor...

Assorted Molex connectors, 0.1" header, DIP sockets, and an IDE ribbon connector.  The ribbon connector operates by that each position has a small blade on it, and the back of the shell snaps the ribbon in place, so that the blades pierce the insulation. 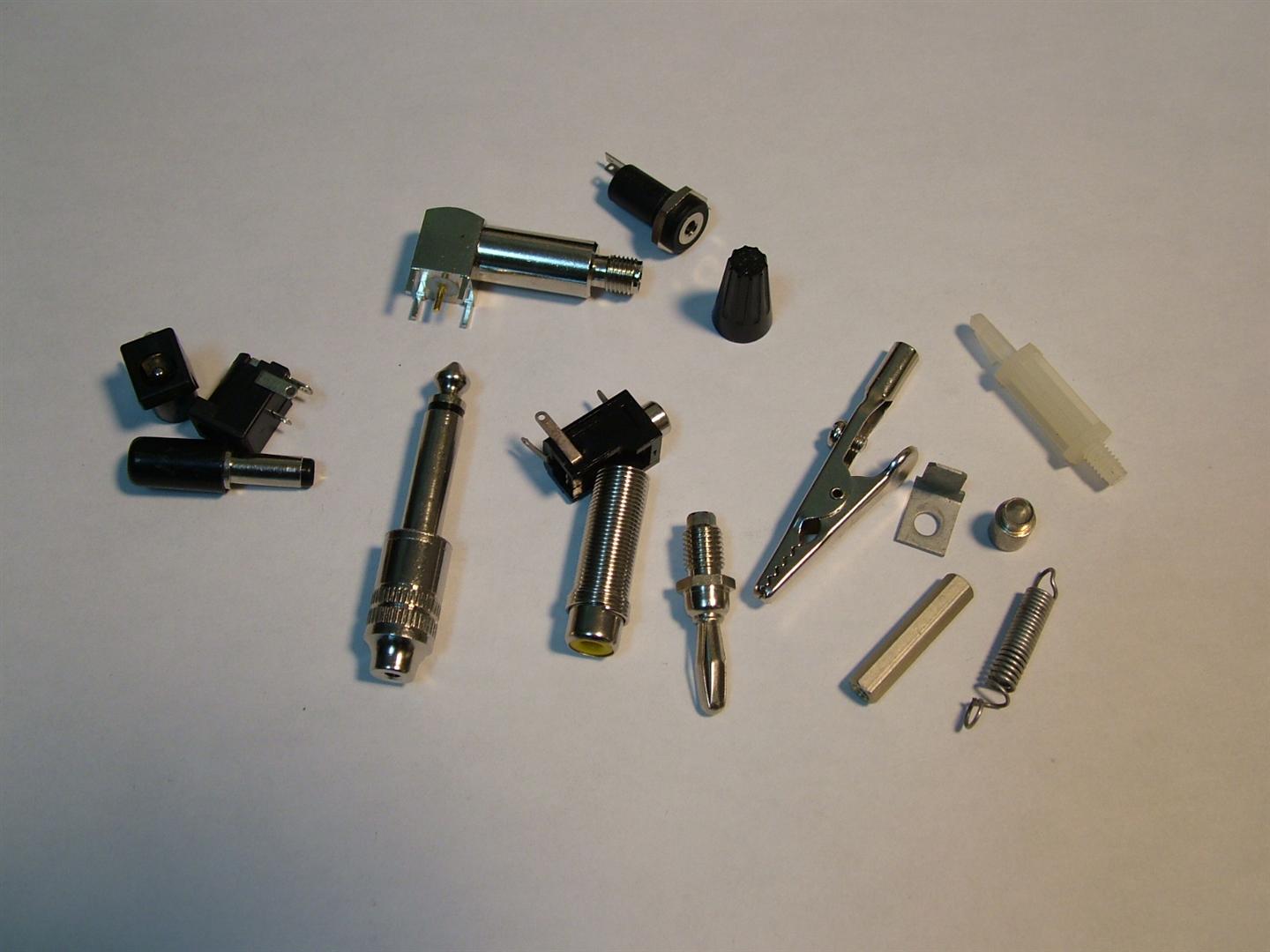 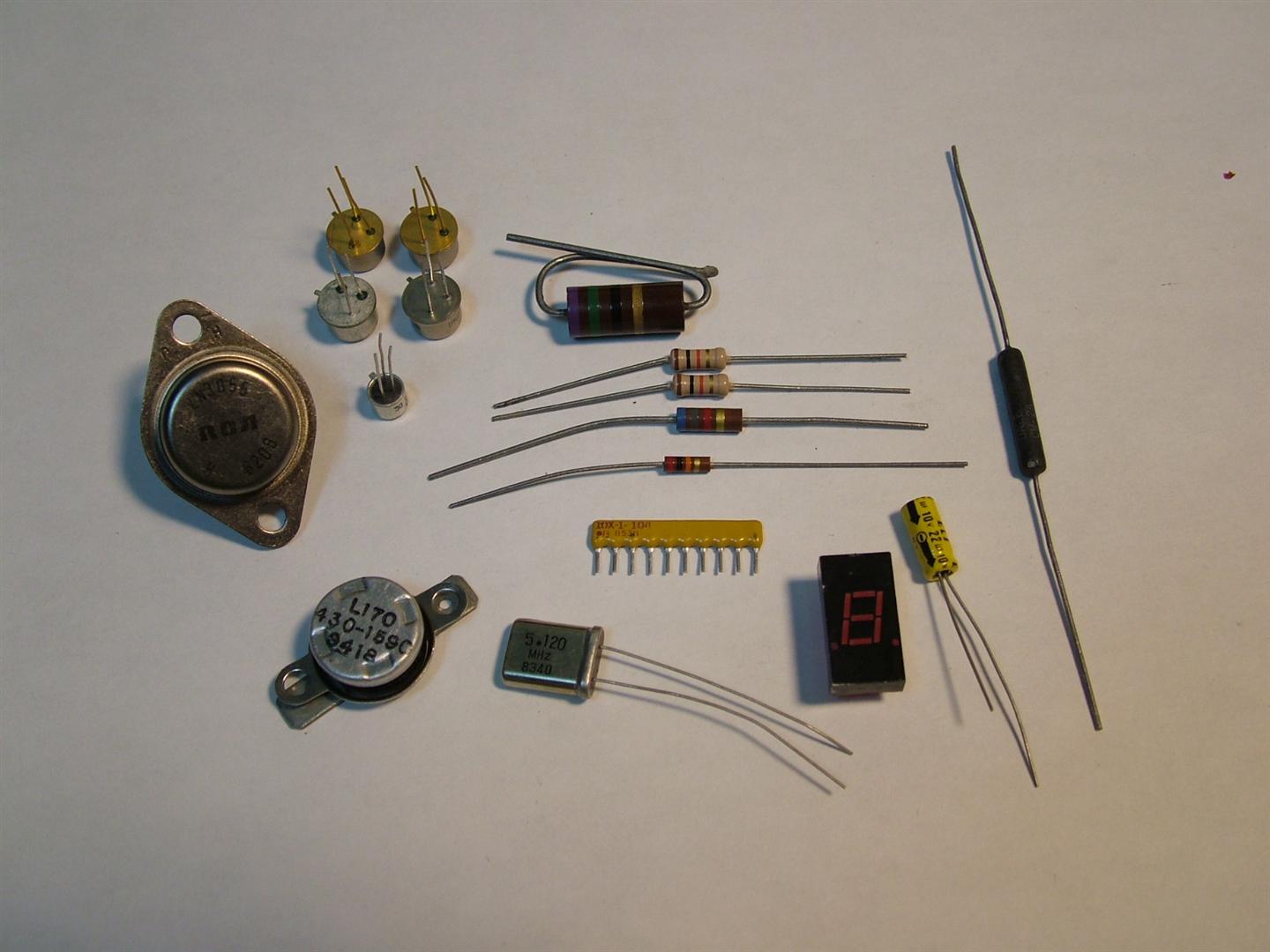 A decent selection of discrete components.  The four cans on the top left were kind of interesting; the traditional PNP compliment to the 2N2222 transistor is the 2N2907, which used to come in TO-18 packages (like the smaller transistor right below them) and now come in the plastic TO-92 package.  These are 2N2905 transistors, which are also PNP transistors, with exactly the same specs as the 2N2907, but come in this larger TO-39 package.  I had never seen them before, and will thoroughly enjoy using them in some project needing moderate-power PNP transistors. 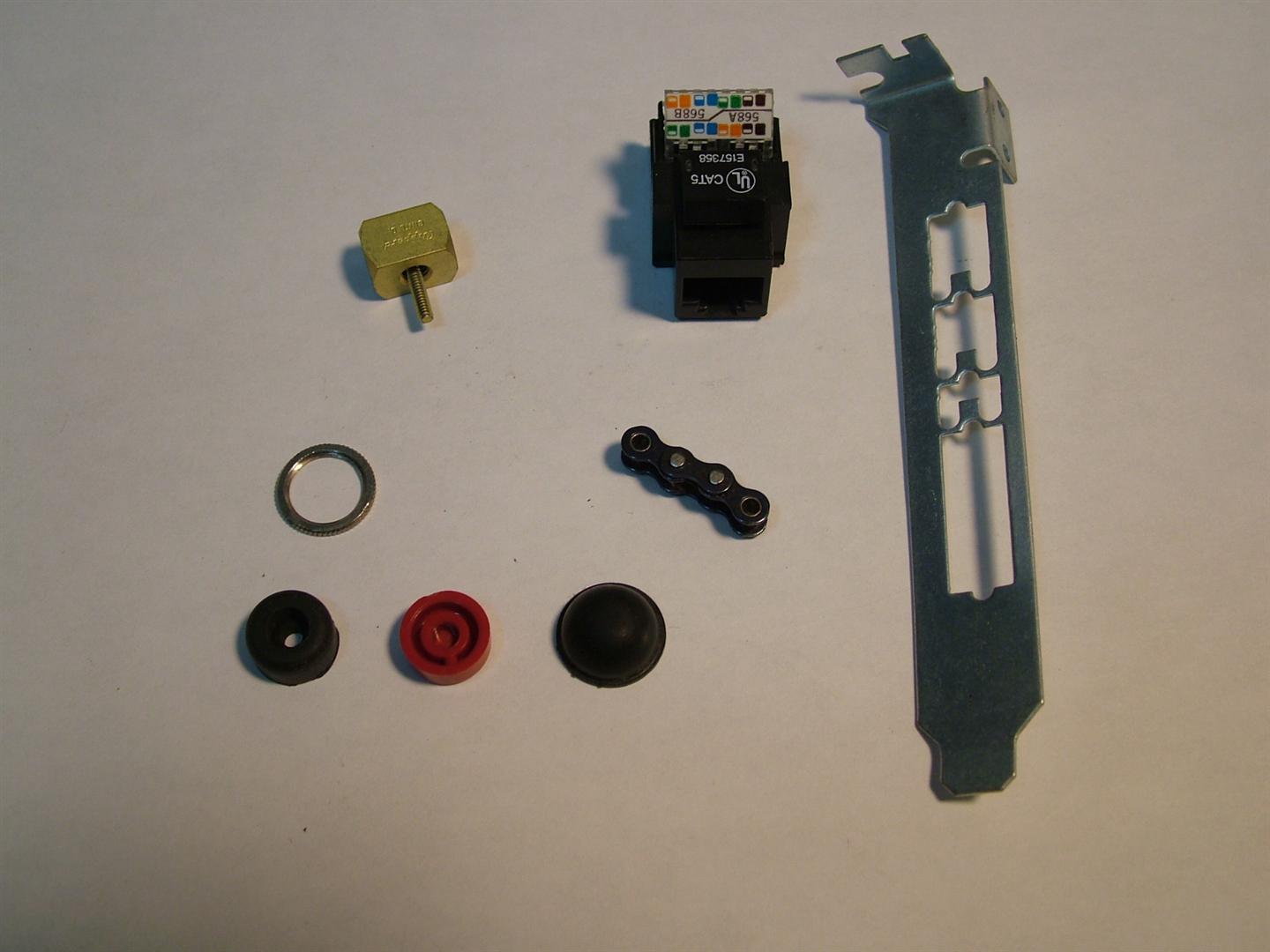 Yay totally random hardware! The CAT5 punch-down block is certainly worth something. What the heck is that expansion card bracket? The best theory I can come up with is that you can snap out as many of the bars as you need to fit whatever size DB connector your card has? Not sure... 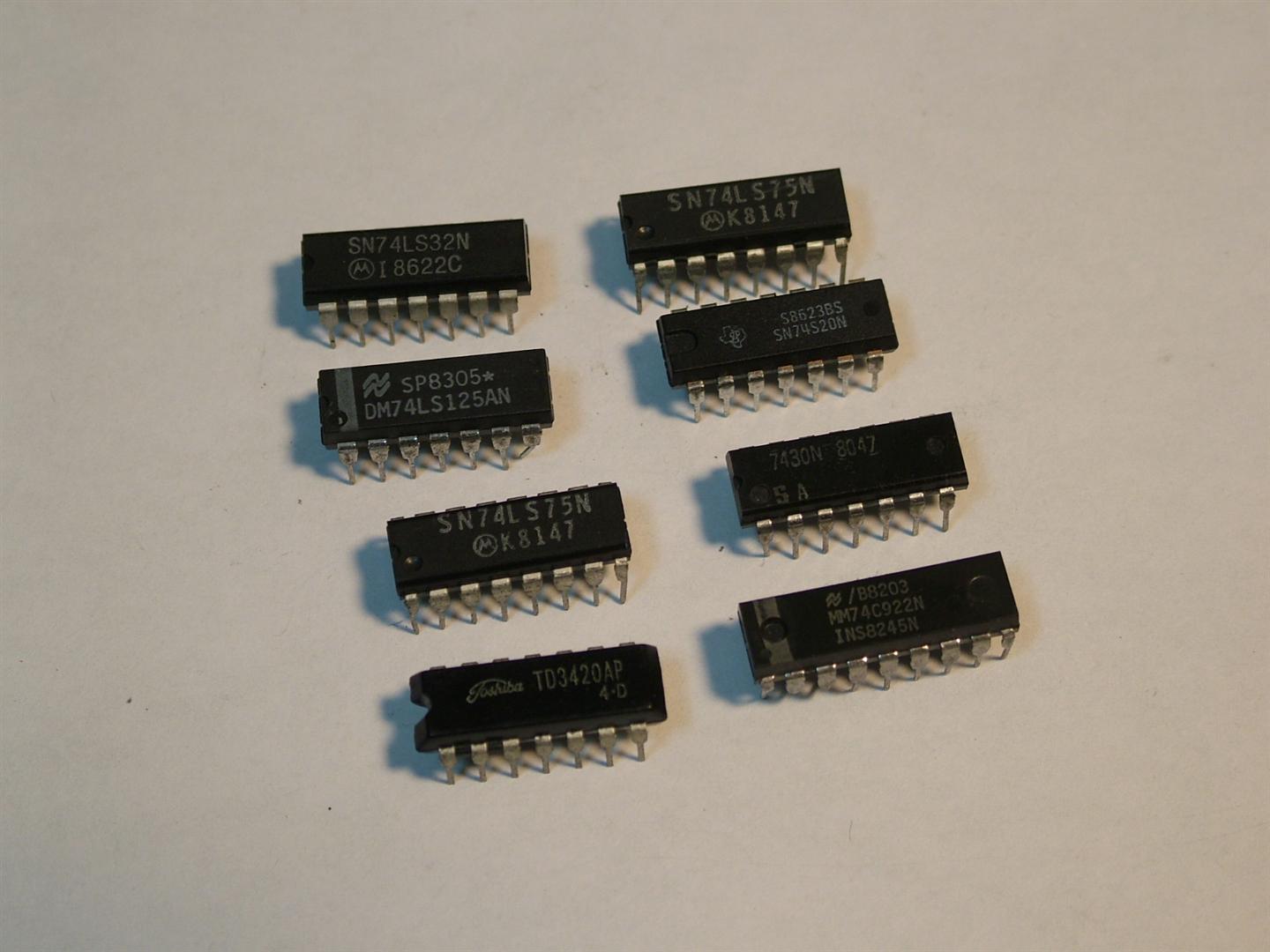 And a handful of unexciting DIP logic... 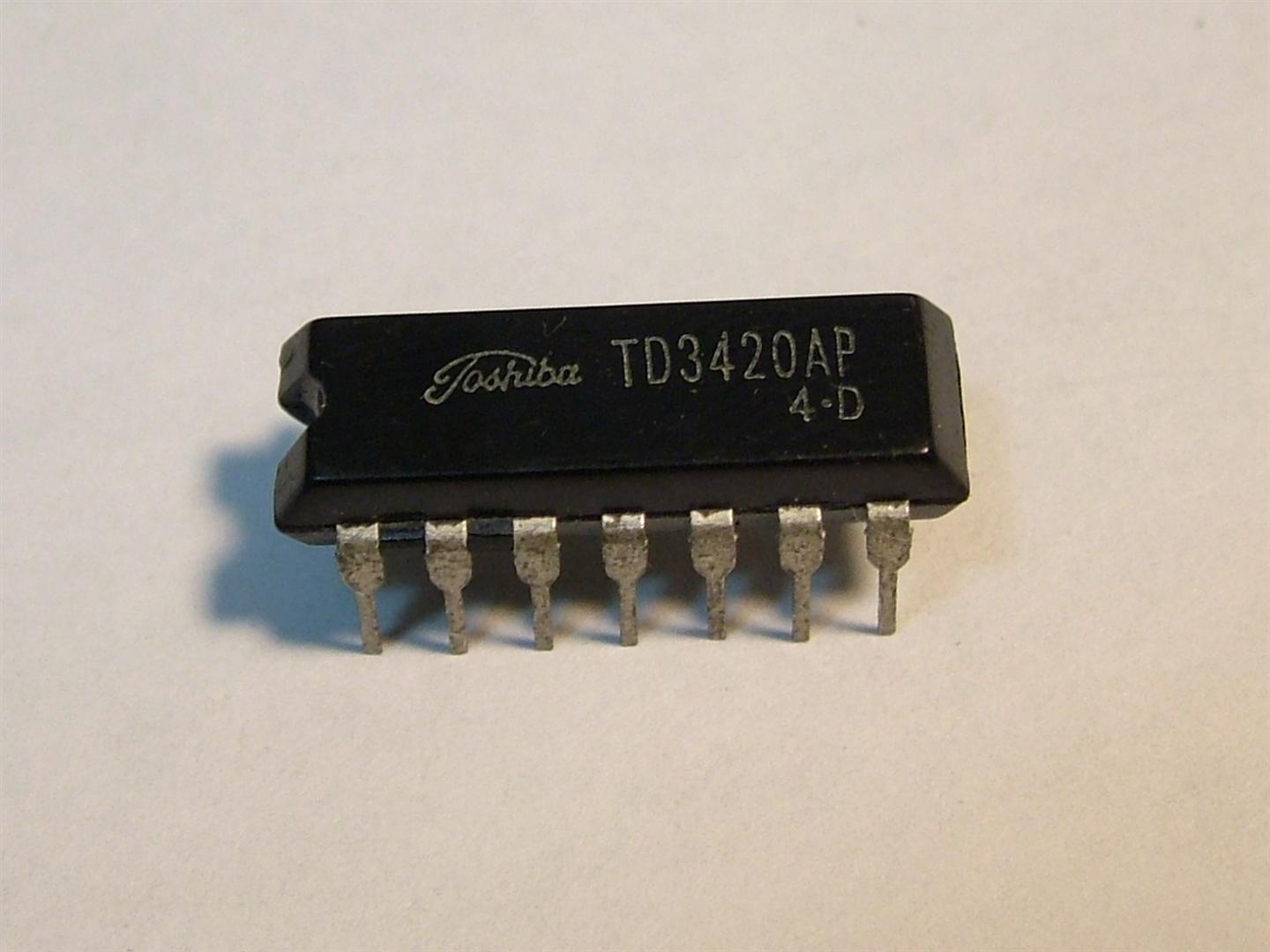 Except for this Toshiba TD3420AP chip...


Edit: Thanks Robin and Jose O for both figuring out that this is a dual quad-input NAND gate.  This makes this chip really interesting, because any manufacturers deviating from the de-facto 74YXX naming scheme for TTL logic was a long time ago and usually short lived.  The contemporary part number for this IC would be 7420. I think this very well may be the second piece of non-Schottky bipolar logic I own (I have about 10' of 74LS logic; I've been meaning to return all the logic I used for my TTL clock to the lab I borrowed it from...)

So, overall, for $4 this grab-bag easily paid for itself.  Grab bags are a great way to spend an evening sorting parts to build the diversity of both your knowledge and your junk box.  When you work out how much time I spent sorting and researching these parts, maybe it wasn't such a great deal, but it was certainly educational and enjoyable, which is what's important about any hobby.

If you don't happen to be in the south bay area, many online retailers also sell grab bags, such as SparkFun or The Electronic Goldmine.