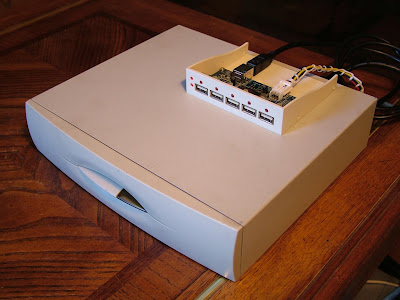 After recently getting Debian running on my National Semi Geode box, I quickly found the two USB ports on it a little limiting. Like any normal human being, I could just plug in a powered or unpowered USB hub, have my extra ports, and be done with it.  I instead opted to go through the effort of getting a spare USB hub I picked up for $2 at Weird Stuff running on it, which is fitting, since they're both USB 1.1.  It's an interesting USB hub - it was originally designed to be installed in a tower's floppy drive, exposing 5 USB ports on the front panel, and was powered by the standard floppy drive power connector.  It also originally used a custom cable for the USB uplink (which was of course long gone), but the PCB has the pads for a USB B connector, so I soldered that on. 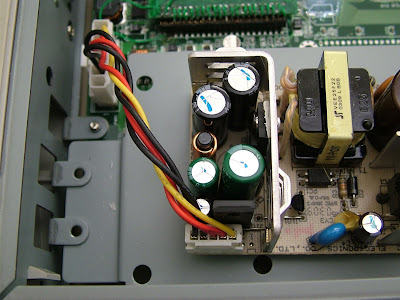 The power supply inside this Geode box is about what you'd expect from a thin client; a modular power supply for 5V and 12V, with a single cable feeding that to the motherboard.  Since this box wasn't designed to ever have any sort of accessories powered by it, it had no need to suffer the added expense of following the ATX standard of a 24 pin motherboard connector and a multitude of extra power connectors for possible accessories.  However, this power supply was at least kind enough to follow the standard color code for computer power supplies:


This is all you need for the floppy power connector, so we're in luck. 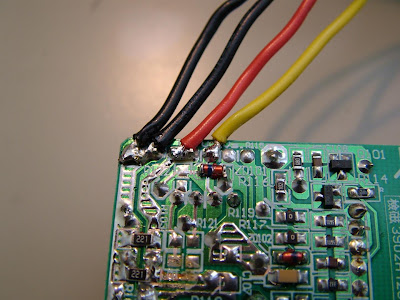 Solder some wires to the underside of the power supply PCB. 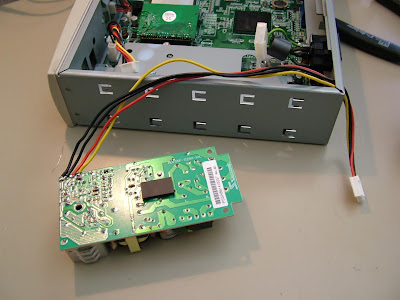 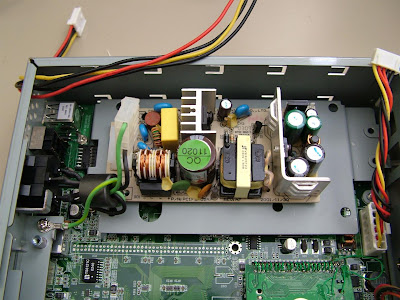 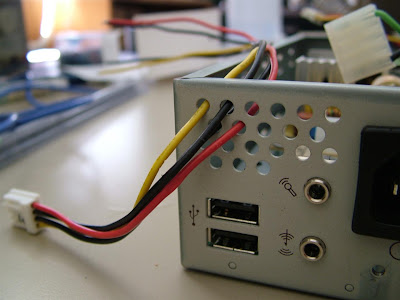 And feed it out through some vents in the box. I salvaged the floppy power connector from a spare ATX power supply I had laying around my (currently very chaotic, post-move) apartment. 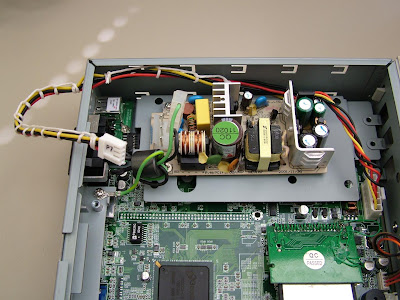 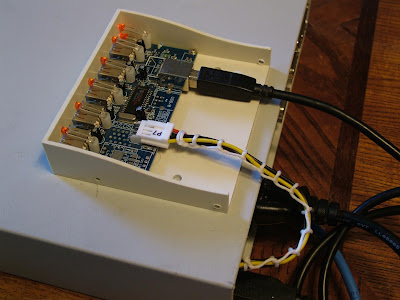 The choice application of some telco lacing cord, and some mounting foam tape to affix the hub to the side of case, and I've got a decently patched up solution. Since it's all USB 1.1, it's slow, but this is going to be my apartment's http server (where the bottleneck is my upload bandwidth), and my print server (so pages will print out slightly slower), so the cost of USB 1.1 isn't too prohibitive.