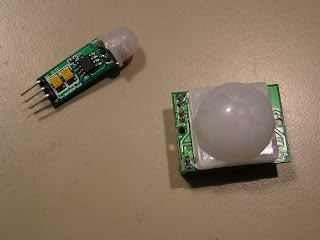 I was recently shopping for some bulk components on eBay, when I discovered one of my regular sellers was carrying PIR motion sensors for $3. I expected them to be junk, like most things on eBay that are just too good of a deal to be true, but for less than $6 I figured it wouldn't hurt to play with them for an afternoon. 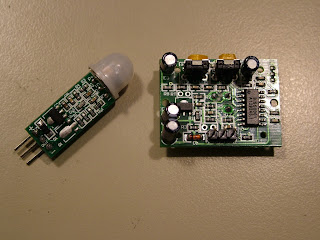 I was pleasantly surprised with how sensitive these are. As demonstrated in the video below, these sensors can detect normal human motion in a room fairly reliably.  This was not at all expected.  Now I've got a couple project ideas, which I might eventually get to.


As I tried to explain in the video, PIR (Passive InfraRed) motion sensors operate on the principle that humans are a very different temperature than the room around them.  By taking an average of the IR temperature of a room, the motion sensor is able to detect when a human enters the room, or moves in the room, by the change in the average temperature.  On the other hand, the sensor does have to allow for very gradual changes in ambient temperature, since over the course of a day, a room will naturally change several degrees. Move slow enough, and you can hide yourself in this ambient thermal noise. Depending on how good the motion sensor is, this may be inhumanly slow.

The modules were very easy to wire up. 5V between the two labeled power pins, and the middle pin sends out a positive 3.3V pulse on detected motion. The smaller module has a fixed sensitivity, where the larger module has two adjustment pots, but the out-of-the-box settings on it were perfectly functional.  Both sensors seem to have a field of view fairly close to 180 degrees; I didn't bother trying to measure it, since you would typically install this in the corner of a room.

Simply searching eBay for "PIR motion sensor" yields dozens of eBay sellers selling these exact modules.  So who else is now thinking about adding motion sensing to all the projects?