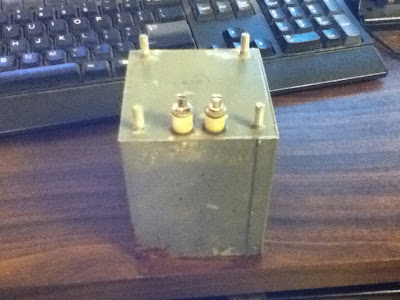 I recently came into possession of two "boat anchors," which is slang for vacuum tube powered radio receivers (since they weigh a LOT). Both of them were pulled out of an e-waste pile, and were both well beyond saving.  I pulled them to strip them for parts before returning the carcass.  This has yielded several interesting components (a CRT tube, tube transformers, an assortment of vacuum tubes and matching sockets, etc), but one of particular interest is the two chokes from one of the power supplies.

After rectifying 60Hz wall power to be DC, it still has large amounts of ripple in it which needs to be filtered out.  This is usually done with a capacitor, but when you're working with several hundred volts, getting enough capacitance to filter out all the ripple can get unreasonable, so in addition to the capacitors, inductors are used.  The interesting part is when you spend enough time cleaning dirt and grease off the labels to figure out that these are EIGHT HENRY inductors.

Eight Henrys is huge. Typical coils of wire are measured in μH, or some of the large power inductors in mH, but these monsters are 8H. 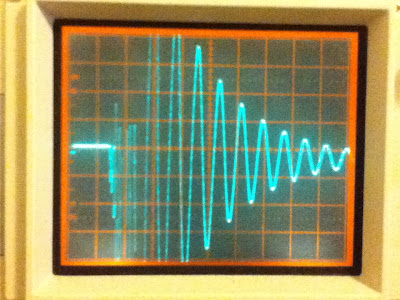 In response to me posting a picture of these on Twitter, Tony Long pondered what the self-resonant frequency of an 8H choke is. I was curious as well, so I hooked one of these inductors up to my oscilloscope and gave it a 15V pulse.  Every inductor has a frequency at which it by itself will tend to ring, but while most inductors have this frequency in the MHz, this one rang at 5kHz.  The scope capture above is at 200μs and 50V per division. 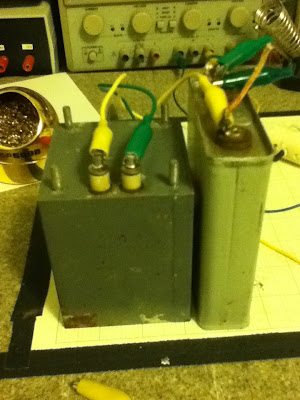 This of course then begs the question: how low can you go? I wired one of the 8H inductors in parallel with a 10μF 600V oil-filled capacitor pulled from the same rig.  In parallel, these form a resonant LC tank, with a resonant frequency that's a function of the square root of the product of the two. 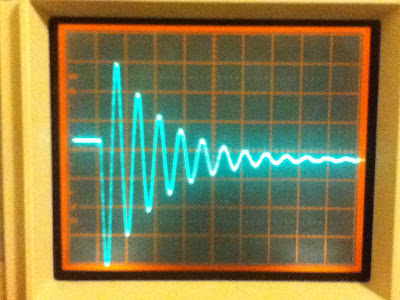 This LC pair resonates at 12Hz, which is crazy. Usually, getting an LC circuit to even resonate as low as audio frequencies is challenging, but here we've got one which resonates at infrasonic frequencies, and with plenty of arcie-sparkie to go with it.

Moral: Always dig through e-waste piles, and make sure you always have a friend with a pickup truck.