My regular readers might have picked up on my pattern of ramping up the number of posts during finals weeks and school holidays, thanks to the additional free time afforded. You might wonder then why I have dropped off the face of the Earth again for a few weeks...

The answer would be W6BHZ, the Cal Poly Amateur Radio Club.  After we finished finals, my buddy Marcel, AI6MS, organized an epic nine day long work week where we finish up the new tower he got donated to the club and converted the old tower to a VHF/UHF/Microwave array with full azimuth/elevation capability.  This will be useful because several members of CPARC are interested in trying to work some of the amateur satellites in orbit.


The first matter of business on the old tower was to remove the old HF antennas, which we were then able to sell to a local ham. Marcel ran a trolley line out to a tree on the other side of the EE building, then we had two people on the ground slowly let out line to lower the antenna along the first line.


Unfortunately, things tended to always take longer than we had hoped, and there was a storm rolling into SLO, so putting the new array up on the tower before everyone went home for break ran well into the night. We used our portable tower as an anchor point to lift the new mast into place.

Once the rain rolled in, we retreated into the shack for some badly needed sorting and organizing.  By the end of the week, we had the shack in probably the best order it's been in decades. 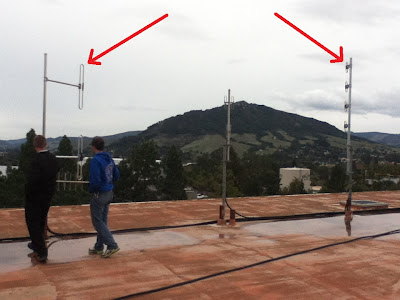 After the rain rolled out, so had most of our work crew.  For the last few days, Marcel, myself, and Nolan were about all there was.  At one point Marcel and I took a break to give the EE department chair a tour of our repeater site on the top of the admin building. 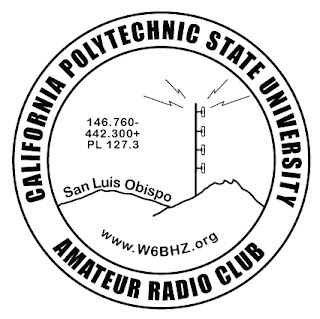 I took the chance to attempt a dramatic reenactment of the CPARC logo, which was mostly hindered by the fact that Jeff put the two peaks too dang close to each other for me to be able to frame it without walking off the back of the admin building.
One interesting fact I learned while on the top of the admin building is that, apparently, the university president has a Voice of God system at their disposal in case of emergencies. 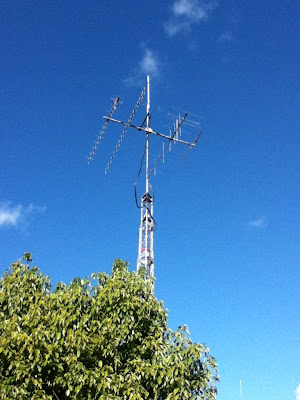 In the end, CPARC now has a top-notch Az/El array, and we all had a pretty good time doing it.  I'm interested in seeing what the rest of the club members do with it, and maybe I'll even manage to convince one or two of them to write about it in the blogosphere.