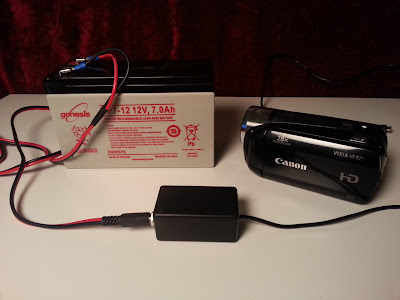 Last year, when I got serious about blogging and producing videos for this site, I got a Canon Vixia HF R21 HD camcorder. It's a great little camera, with 32GB of internal storage plus two (!) SD slots for future-proof expansion.

My one complaint with it is that the battery life isn't very exciting. At the time, it seemed that almost all the small HD camcorders suffered from the same plight, which is a 45 minute battery life. It's rare that I don't need to shoot at least that much video, even for a short video, and I'm regularly recording 2 hour lectures with it. This means that I've been tied to a 120V outlet, which is rather annoying. 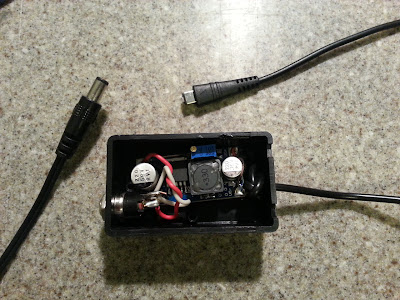 To solve this annoyance, I built myself a 2.1mm barrel to Canon adapter, using little more than one of the LM2596 switching regulator boards that you can get on eBay for $2 a piece*. I was never able to figure out what the power connector on the Vixia really is, so I broke down and bought one of the $10 knock-off wall chargers and cut off the wall wart. Now I'm able to plug in as big or as little of a battery as I like, and no longer need to be near an outlet when shooting video.

* - I've found that these cheap voltage regulators often come with one or two cold solder joints, which can make for flaky performance. I've made it standard protocol to reflow all the solder joints and add more solder before building one of these into any project.