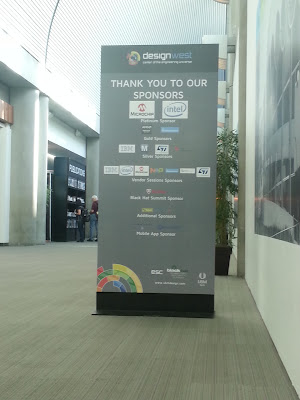 I took a break from the grind of grad school down in SLO today to come up to San Jose for the first day of what people still call ESC. It was, like always, a very interesting day spent catching up with old friends, making new ones, learning about new services and technologies, and swapping the scuttle-bug about who is now working for who and who left which company. 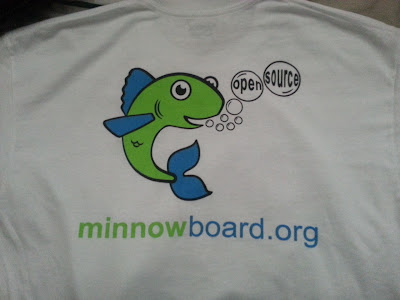 One of the most interesting talks I had was with my friend Clint from CircuitCo (which you may remember I toured their facility in Texas back during the summer). CircuitCo invariably has quite a few interesting things in the pipe, including their new MinnowBoard based on the Intel Atom processor. 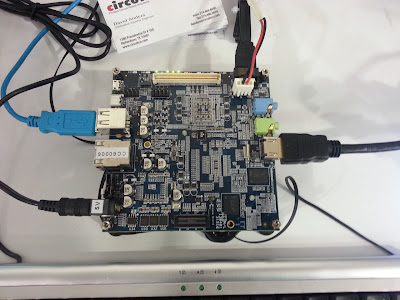 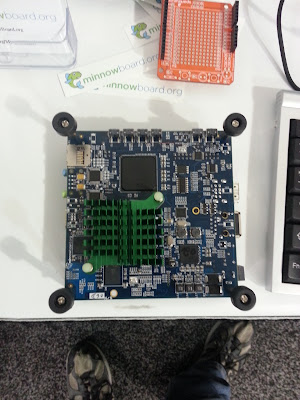 While almost all of the contemporary embedded Linux boards that everyone is getting excited about are ARM-based, there are still some advantages to having an x86-based board. There are applications which only ship as x86 binaries which I can't run on any of my ARM boards, and the Atom enjoys slightly higher end peripherals than most of the ARM boards (SATA, 1000bT Ethernet, etc.). Distributors are musing upon a $199 price-point, which isn't bad for a first-out-the-gate x86 board, and I like seeing anyone put pressure on Intel about refreshing their aging Atom line.

I never snagged a personal picture of the new BeagleBone Black, even though I think I saw them in at least a dozen booths. I'm certainly excited to see how this iteration plays out against the Raspbery Pi; TI has come within striking distance of their price point with enough extra features to make people take notice.

To be fair, I always have been and will be in the Beagle camp, since the $35 price point of the RPi makes no difference to me; CircuitCo and TI give me Beagle kit for free whenever I ask. I love love love all the I/O options the BeagleBone gives me vs the Pi, so I don't even feel bad. Of course, the BBoneBlack is yet another dev kit reminding me how silly it is that I have no way to view HDMI in my TV-(and sub-five-year-old monitor)-free apartment. 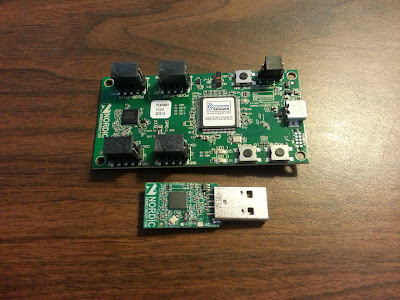 While having dinner with Philip Freidin and gang last night, the new Nordic nRF51822 RF SoC came up in conversation (we are so much fun at parties). This chip consists of a 2.4GHz radio transceiver and an M0 ARM processor with 16kB RAM/ 256kB FLASH, and just happens to the the perfect part for a project I've been trying to part out for a few months. This SoC is going to easily replace three or four ICs on my napkin BOMs, so I was pretty excited to start playing with it.  Unlike all the yahoos roaming around in herds trying to get the free stuff listed in the program, I just asked Nordic for one of their nRF51822 eval kits. They make a big ado about sneakily pulling one out from under the counter for me, but considering that I don't really need any more cheap ballpoint pens, I appreciated it. Thanks Nordic! 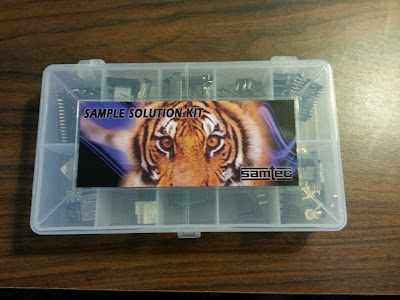 Samtec is a connectors manufacturer who I have gotten good recommendations for. They were nice enough to give me one of their connector kits, which is a little SMD heavy for my taste, but certainly useful. 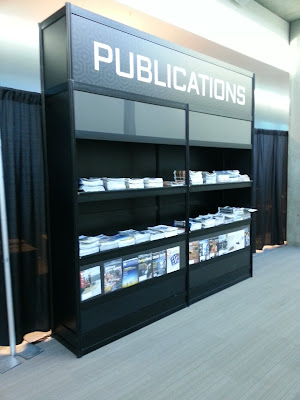 I always feel a little silly doing it, but I make a point of picking out a relevant stack of the conference trade journals when I'm at conferences like this one. It gives me some interesting, if annoyingly marketing-hyped, reading for when I'm laying in bed.

Other than that, I had an overall good time today at ESC. Catching up with old friends was nice, and it put plenty of new exciting things either on my radar or in my pipeline. Both myself, and a few companies where I have friends, look to be announcing some exciting news this year. Stay tuned. ;-)