So the price of technology still ceases to blow my mind. For the last few weeks I had been tossing around the concept of thin clients, which is where you have all your software running on one computer, and then displaying on many. The primary application being in schools and libraries where you can have a bunch of old, cheap Pentium IIs and one big new shiny server running everything, pretty much making the PIIs as fast as the new server, depending on how many people are running it.

I've wanted to play around with this, but that didn't work too well when I was lacking one key piece of hardware to pull it off: an extra network interface. All new computer's come with a network interface build onto the motherboard, (in the old days, it was an extra PCI card) so I can't just borrow another one from one of my other computers and play with it till the cows come home.

I needed to go buy a PCI NIC (Network Interface Card) to add to my server so I can play around with this. I saw a whole box of these at Weird Stuff, a local surplus electronics store, for $5, so that was my plan, until I checked on Fry's website for the general price of a new NIC. 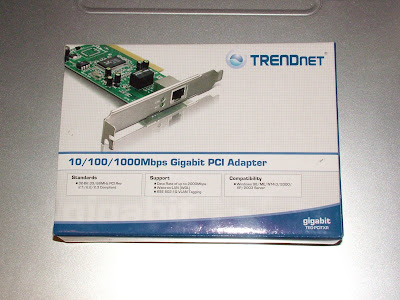 So I ran over there that afternoon and picked up the one I saw on the website. But I discovered something really interesting when I was looking at the shelf. The brand name NICs; more like $70. That's a pretty crazy difference from brand name to generic. I'll take a generic, thank you very much...

So now my desktop has 2 network interfaces to play with. I installed Edubuntu x86 server on a spare hard drive and plugged my laptop into the second NIC. Turned it on, and like magic, I had Linux booting on my laptop from across the network. Now hopefully my dorm will have a Cat6 jack in it so I can run this card at full speed for once. (All of my other equipment is 100Mbps)