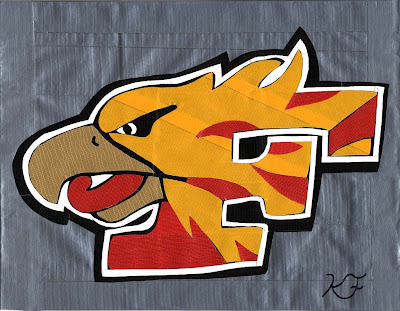 So every year the Fremont High School Band program holds a silent auction at their winter concert. They sell lots of average stuff like small appliances and baskets, but last year I was feeling good and wanted to give something back to the band seeing as how it was so important to my high school experience. So I took the poster I had made of the school mascot (Firebird) and framed it and put it in the auction with a starting bid of $15, expecting it to get to about $30, which wouldn't be that bad for the band. Turns out there was two Fremont alumni in the audience that REALLY wanted that poster, so it ended up going for more than $80!

So this year the band came to me and asked me to make them another one. Pictured above is what came of that request. The entire sheet is 8.5" x 11" and is all duct tape with the exception of my signature, which is sharpie. Let us hope it does pretty well in the auction this year. It will probably help that they know about it early; last year I showed up 30 minutes before the auction opened and plunked it down on a random table with a bid sheet, so many people I talked to never saw it.