Last week I found a youtube video about a soda shop in Los Angeles that sells something along the order of 500 different types of microbrew soda. Soda using real sugar and flavoring, that is something I've always wanted to try. Luckily, they have a website where you can mail order their soda from. Unluckily, mail ordering soda is much like mail ordering water: rather heavy, and incredibly expensive.

I've been hemming and hawing one way and the other about paying quite a bit of S&H on some rather expensive soda to begin with. I had almost talked myself into it, when I happened to be wandering around a BevMo this weekend. Beverages and More is a chain of stores which sell almost nothing more than drinks, and mostly alcoholic drinks at that. I was sharing in the experience that was driving to BevMo and buying drinks by those of the prim and proper age to be doing as such. This left me in the very axillary position of completely and utterly useless, so I had some time to wander the store. 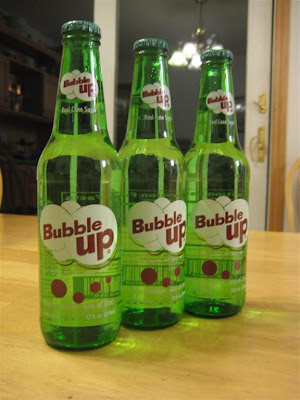 There it was. Bubble Up. The very soda, above any other soda I saw at Soda Pop Stop, that I knew I had to have. Cane sugar, real lemons, real limes. The holy grail of lemon lime soda. And it was right there. In my hand. I had to have it. There was additional flavors bought. An underwhelming Strawberry and Grape, as well as a quite good Peach. None of them quite compared with this though, so I'm quite content with my current supply of snobby soda.

So be advised, if you're a fan of, or want to try, good soda made with real ingredients, BevMo has one short aisle of the stuff, which might hold you over until the next time you happen to be in LA.