I came up with this idea while hanging out with my sister in Davis last weekend. For her 18th birthday party, we managed to find a good deal on white wine glasses, so instead of buying disposable red party cups, we bought two and a half cases of white wine glasses. Of course, we've never even come close to using anywhere near that many wine glasses simultaneously since then, so most of them have sat in storage. We came up with the idea of, instead of using wine charms, to etch a strikingly different design in each wine glass to make them easily recognizable when we have several people over for wine.

This is my first attempt at such: 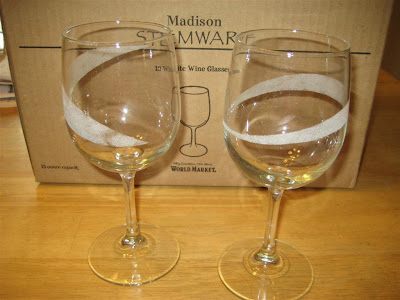 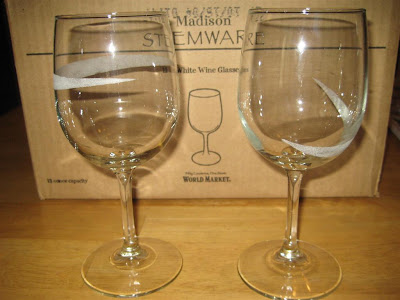 I found making four different designs that were both different, yet stylistically the same very artistically challenging. Of these four, I would really only classify the last two as really being part of one matching set. I feel the top left one is too heavy handed to match the minimalistic touch of the bottom two. The top right glass is a continuous ring, and I would like to eventually pursue that as an entirely separate set of four.

How I made these designs

Making the designs was relatively simple, ignoring the fact that it requires a sandblast gun, and somehow getting sandblast media, which was an adventure all its own. 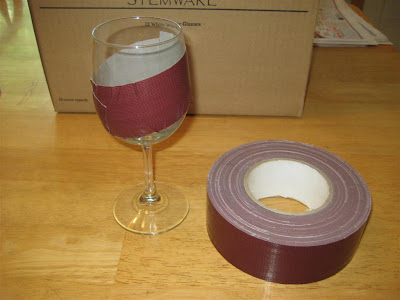 First I very carefully selected maroon duct tape from atop my pile of 35 other colors of duct tape, and masked off the areas where I wanted to detail the glasses. 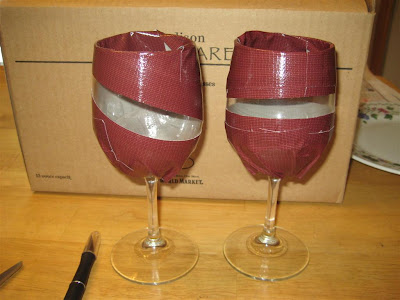 Once they were masked off, I used an exacto knife to cut out the designs, and added more masking to prevent any kind of splatter damage to the rest of the glass.

Take it outside, hit the areas with my sandblast gun, peel off the tape, and wash. I have to say they turned out better than I ever hoped for. I'm currently working on a set of four plain old fashioned glasses I've had laying around in my collection for a few years, so I'll keep you updated on those.