Fun fact: No one has any idea what sandblast media is. I have been previously using sand, which you would think is the obvious choice, but chatting it up with a vendor at a hardware store convention, it was pointed out that sand is a rather poor media. When used, it apparently tends to crack and then you're blowing silica dust everywhere. Another one of those Bad Ideas™ in life.

One of my Sun Jars ended up broken, so I needed to reetch another jar for it. Unfortunately, when I went to pull out the cardboard box in which I store my sand, the bottom of the box decided that it was cool right where it was, and saw no need to come out to the party I was throwing for it and the other four sides of the box out in the open. Needless to say, the sand was in general agreement with the bottom of the box, but went even further and threw a party of their very own ALL over the floor. Fine. Looks like a sign from above: I should go out and finally buy real sandblast media.

In case you didn't know, sandblast media comes in several different types, such as glass beads, coal slag, aluminum oxide, or even biodegradable ones such as corn cob, as well as several different sizes, dependent on what kind of work one is planning on doing with it. Considering that I pretty much only do glass etching, I was looking for something along the order of 30 mesh glass. Of course hardware stores wouldn't have any of it. What kind of normal customer would ever dream of wanting something as eccentric as sandblast media? Me, that's whom...

I can't list them all off the top of my head, but I called several places, such as Franciscan Glass and Peninsula Building Materials, to try and find someplace that carries, or even just be able to hook me up with media. None of them had it. None of them had even heard of what I wanted. To give the guy at Peninsula credit, he at least picked up that sand might be of use to me. My father, in his infinite wisdom, next came up with Grainger. An industrial supply company with a 6 inch thick catalog. They have got to have this.

Matter of fact: they do. 26 kinds, in fact. Score. Not only do they have glass beads, they even have just crushed glass for those of us not looking to set the sandblasting scene on fire. Just a little unfortunate that they only sell it in 50 pound buckets, but when you need it, you need it. US Sieve 25-40 (which is slightly different from mesh sizes) ground glass blast media.

Victory. I call them up, and talk to a rather intelligent sounding guy who figures out which store I should be at, and points out that they only have two in inventory, and offers to put one on will call for me. What the heck? Type type type, done.

He then went on to point out that Grainger does not sell to us lowly public, but since I seem like such a fine and upstanding guy, he'd do me the favor of taking my $40 for a freakin bucket of ground glass, this time. Me possibly getting a catalog for my collection was out. of. the. question.

Long story short, I got my sandblast media, and the message that Grainger does not want to serve me as an individual. I later found out this has to do with them keeping their wholesale status, and one of my buddies gladly gave me his card to use next time I need something.

In case you're curious what the stuff looks like, here is two pictures of my bucket once I got it home. After my first pass with the stuff, I now realize it flies much farther, and is much more noticeable, than sand. Unfortunately, this was after three hoppers worth of media, so I am currently working on strategies to reclaim the stuff to keep my entire front yard from being as sparkly. 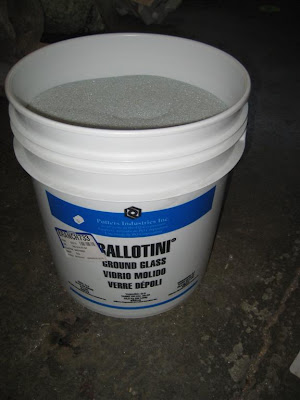 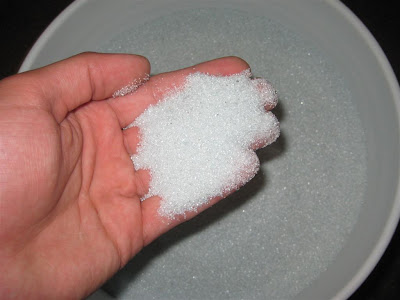